So much of our knowledge is filtered into our subconscious.  Even so, it is knowledge that is accessible and usable.  It often takes something like the process of writing to get in touch with all of the obscure references we pick up everyday.

For Example, many of my stories were influence by the prequel Indiana Jones series written by Rob MacGregor from 1991-1992.  Indy’s wife’s name was Deirdre.  The Earth Mother of Chelsea, the Spirit Child, was named Deirdre. I also borrowed Katrina from the series as well, as in Katrina the Kat Burglar.  The idea of the “Guardian of the Gates” probably originated from the Seven Veils. I didn’t see these connections until I started re-reading the series again recently.  I think that I was consumed by my emotions and my problems so much that I wasn’t aware of such subtleties.  Still, they existed rather I was aware of them or not.

Over the past few years I’ve seen a tremendous influence of both She-ra and The Mysterious Cities of Gold on my writing. From the Rising Island of Ocho, to the name Jadora in Tukyme, She-ra has remained in my imagination.

This new story Freedom is a conscious effort though.  I am aware of all that is flowing into it.  As the chaos clears and I gain both education and maturity, it becomes easier to craft stories, rather than rely on a stream of consciousness. However, the magic of creating is not all gone.  There is still a bit of mystery as to how these influences reshape themselves and change under the filter of my experience and personal style.

Reading on the Kabbalah and writing this story got me to thinking about the He-Man and She-ra cartoons.  How did the writers come to create them and what influenced them?  In essence, I am going back to their original inspirations and reworking ideas into my own.  There is a lot of material to work with really.

He-Man is a Superman type hero, including the mild-mannered alter ego.  Instead of the quiet newspaper reporter Clark Kent, we have Adam.  Adam is, by no coincidence, the first man and the representation of everyman. The Kabbalah speaks of how all of the human souls resided in Adam until the fall, then they all splintered into millions of individual souls.  Eternia, where He-Man lives, is Eternal.  It is a sort of symbolic Eden or earth.  His nemesis, Skeletor, is a smart-mouthed Grim Reaper figure that is also the devil.  He lives on Snake Mountain after all, which is symbolic of the serpent in the Garden of Eden.  He-Man and Skeletor’s battle is the Eternal one between good and evil. 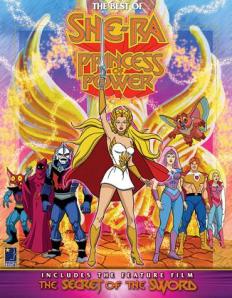 She-Ra is, of course, the spin off.  The creators used the Romantic Epic formula to create a twin.  The cartoon was supposed to be a feminine version of He-Man.  At first I thought that She-Ra was the girl version of the Egyptian God Ra.  Ra is better known than the Canaanite Asherah.  Once I read about Asherah in reference to the Kabbalah, it all fell into place.  She-Ra included Angelica, an Angel, and Madam Raz, as in the Archangel Raziel.

The imagery and symbolism are more subtle in the spin-off, but the idea is the same.  Hordac is the evil nemesis and She-Ra must constantly battle him.  Instead of looking like death, Hordac looks more like a vampire—and a mechanical one at that.  Themes of colonization and industrialization run throughout, but are never really central.  Etheria is ethereal or heavenly.  It would seem that Etheria represents a battle in the heavens between angels and demons. 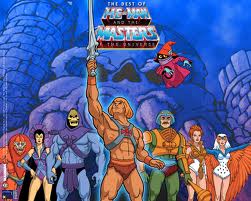 versus machine, while She-Ra tends to focus more on magic and mysticsm.  She-Ra does posses superhuman strength like her brother, but she has other powers as well.  She can heal, among other things.  In many ways, she does embody the goddess Asherah.

Both cartoons posses elements of whimsy. They added silly humor to lighten the darker undertones.  Despite the presence of violence, no one really ever died.  In She-Ra the robots took all of the beating, which was okay because they were mindless machines.  It always seemed odd that machines existed in a medieval setting, but that didn’t matter too much since it was a fantasy setting after all. The costumes weren’t practical or realistic either.  They reflected the 80s idea of fantasy—no doubt influence by Boris Valajio. The quality of animation wasn’t that great either.  It is more realistic than some kid’s cartoons today, but it lacks the clarity and beauty of recent Pixar and DreamWorks cartoons.  The new rendition of He-Man is much better, artistically speaking.

Reading and writing and writing about reading are my passion. I've been keeping a journal since I was 14. I also write fiction and poetry. I published my first collection of short stories, "Radiant Darkness" in 2000. I followed that up with my first collection of poetry in 2001 called "Journey without a Map." In 2008, I published "Persephone's Echo" another collection of poetry. Since then I've also published Emotional Espionage, The Way The Story Ended, My Perfect Drug and Out There. I have my BA in English from The Ohio State University at Mansfield and my MA in English Lit from The University of North Carolina at Greensboro. I also have my Post BA Certificate in Women's Studies. I am the mother of two beautiful children. :-)
View all posts by carilynn27 →
This entry was posted in Literature/Pop Culture and tagged Biblical Symbolism, He-Man, Indiana Jones, Kabbalah, She-ra, The Mysterious Cities of Gold, Writing Influences. Bookmark the permalink.