Jesus, Oprah and Doppelgangers have dominated this week—reading wise anyway.  I read Phillip Pullman’s new book The Good Man Jesus and the Scoundrel Christ and Kitty Kelley’s biography of Oprah this week.  Pullman deals with the idea of Doppelgangers and so does the TV show The Vampire Diaries. 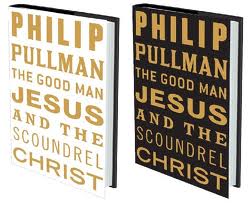 Pullman’s book is part of the Canongate Myth Series, which also featured Jeannette Winterson’s book Weight and Margaret Atwood’s book The Penelopiad.  Although Pullman’s narrative is subversive in many ways, it struck me as traditional in many other ways.  He retells the story of Jesus from the nativity scene to the resurrection with out deviating much from the biblical version at all. The Nativity Scene is questionable according to historians.  Pullman doesn’t speculate much on the missing years of Jesus, nor does he suggest that Jesus was married or that he survived the resurrection.  The only real change that he made was in splitting Jesus into two parts—doppelganger brothers.

Anyway, Pullman may or may not believe that Jesus had an actual brother.  The presence of the brother is more metaphorical than anything.  He means to show that the man Jesus and the Myth of Christ are two different people.  Jesus was a real historical person who was not divine or perfect.  The myth of Christ the Savior is what the Christian Church was founded upon and Pullman believes that to be a bad thing.  He seems to admire then man Jesus and his message of peace, love and tolerance.  It is the corrupt church Pullman despises.

Interestingly, The Myth of Christ is largely the apostle Paul’s doing.  The Apostle Paul is the one who fashioned the events of gospels to fit his message—his vision of a savior.  While Pullman does not point directly to Paul, the character of Christ could easily be Paul. I do not believe that Jesus became Paul, as one author suggested, in a way they are brothers or doppelgangers.  Jesus and the Myth of Christ are always mistaken for each other—forever entwined in history as they are inseparable in the bible.

The same could be said of Oprah in a way.  The Myth of Oprah is

connected to the woman, but the woman and the myth are not the same thing.  Oprah is an icon and a sort of new age guru.  Many of her critics have made reference to the “Church of Oprah” and the “Cult of Oprah,” believing her followers to be brainwashed.  Kitty Kelley reveals the cold, aloof, insecure woman with dark secrets behind the strong, confident leader.  Indeed, Oprah is influential.  Many believe that is was her backing of Obama that resulted in his election as President.

While I admire the good that Oprah has tried to do with her power and her millions of dollars, Mother Teresa she is not.  Despite her heart being in the right place, she remains disconnected and ineffectual.  Oprah is materialistic even though she stresses spirituality.  I admire her desire to improve herself and the world, but I do not subscribe to the Myth of Oprah.  She offers me nothing I could not discover for myself.  I have read only a hand full of her book club selections—the ones that have spoken to me directly.  I watch the show only in passing and have read her magazine only occasionally. While I do enjoy her insights and recommendations, I often balk at the expensive items that she raves over. I don’t think she realizes that many of her viewers are too poor to purchase the things she advertises.

The problem with those few who are lucky enough to go from rags to riches is that they quickly forget what is was like to be poor.  They are fond of reminiscing about how terrible it was to go without, yet they are unable to connect to the poor once they are rich.  If money and fame come in the teenage and young adult years, the comprehension of socio-economic factors contributing to poverty fails.  To become rich in the formative years breeds a sense of entitlement.  To become rich after the age of 30 is more likely to create a sense of gratitude.  To raise a child in poverty is perhaps the most eye-opening experience of all.  To really understand the failings of society, one must see the system with the eyes of an adult parent trying to care for their loved ones and not being able to.

I’ve been reading Keith Ablow’s posts on the Fox News Network Website.  While we agree on the issues of compassion and truth, I am finding our views drastically differ in politics.  I suppose it is because he grew up in an affluent home (at least that appears to be the case) where I as I did not.  He very obviously did not vote for Obama.  In fact, he seems rather distrustful of our leader.  Truthfully, Obama seems to love the potential of the USA, but not the USA that currently is.  The Capitalistic Climate is being threatened and conservatives such as Ablow do not like it.  I, on the other hand, embrace it extreme alternatives to the current system.  I view capitalism as an oppressive, unfair and unequal system. It encourages selfishness and materialism, which has harmed the environment and kept women from being completely equal.  Mind you, I still support democracy.  I just wish that we could go back to the bartering system or something.

Anyway, Vampires strike me as rather Machiavellian. They embrace the hunt and relish their control.  I have enjoyed the doppelganger back-story in The Vampire Diaries.  Although, I still don’t quite understand why the Petrova Doppelganger exists or how.  A double is needed to break the curse of the Vampire and the Werewolf, but why?  What power does the mirror image or twin represent?

Reading and writing and writing about reading are my passion. I've been keeping a journal since I was 14. I also write fiction and poetry. I published my first collection of short stories, "Radiant Darkness" in 2000. I followed that up with my first collection of poetry in 2001 called "Journey without a Map." In 2008, I published "Persephone's Echo" another collection of poetry. Since then I've also published Emotional Espionage, The Way The Story Ended, My Perfect Drug and Out There. I have my BA in English from The Ohio State University at Mansfield and my MA in English Lit from The University of North Carolina at Greensboro. I also have my Post BA Certificate in Women's Studies. I am the mother of two beautiful children. :-)
View all posts by carilynn27 →
This entry was posted in Literature/Pop Culture, Politics/Economics, Religion and tagged Christ, Doppelgangers, Jesus, Keith Ablow, Myths, Obama, Oprah, Phillip Pullman, Rags to Riches. Bookmark the permalink.