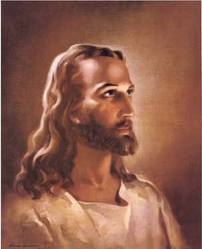 Savior is an archetype.  Jesus is perhaps the most famous savior.  Christmas is celebrated worldwide even by non-Christians.  Jesus embodies a great many things.  Although the Jewish prophesy envisioned a warrior-King, Jesus turned out to be surprisingly nonviolent.  Thus, he embodies love, compassion and forgiveness.  Through his death and resurrection, he also offers salvation.  It is faith in Jesus and the Lord’s mercy that is key to Christianity.

Seemingly, the quest for the truth is the most relevant aspect of the archetype for me right now.  Saturday, I watched the episode of Legend of the Seeker entitled “Fury.”  Richard is overcome with rage.  He must learn to master the power of the sword so that it does not control him.  In the pivotal scene Zed asks Richard why he is angry.  Richard shouts that he is angry because he can’t be with the woman he loves.  Zed tells him that that is a good reason, but not good enough.  Richard then declares that he is mad because his grandfather, Zed, lied to him and kept his destiny a secret.  Zed grins and tells him that that is more like it.  Richard endures the pain of the sword and conquers its powers.

In watching this, I was reminded of the Wizard’s Rules. I posted 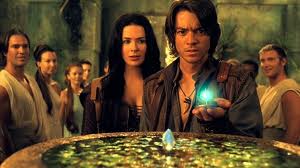 one of the rules on my status update on facebook.  From The Stone of Tears, “The greatest harm can come from the best of intentions.”  It is true. It is difficult to foresee the affect that we have on others.  Sometimes something said out of pain or even out of love can hurt someone deeply.  Thoughtless words can wound in ways we never anticipated. It is impossible to protect everyone from everything.

Wizard’s Rule Number 3 from The Temple of Winds, “There is magic in sincere forgiveness: in the forgiveness you give, but more so in the forgiveness that you receive.” Even when most people would find it impossible to do so, I forgive.  I always move toward a place of peace.

Unfortunately, I often alienate others in working through my emotions.  Those who truly love me have forgiven me through.  Days, weeks, months and even years pass by, but I can’t think of anyone who didn’t eventually let go of their anger toward me.   Love does take time to heal.

From Phantom. Wizard’s Rule Number Eleven says, “Willfully turning aside from the truth is treasons to one’s self. This is something I have believed for a long time. The most damaging lies are the ones that we tell ourselves.  Being honest with yourself is very important for living a happy life.  As difficult as it can be to face our fears, living a lie is worse.  Not only do we cause ourselves endless amounts of pain, but we caused our loved ones pain when we lie to ourselves. I have been hurt many times because those around me were not strong enough to handle the truth.

In fact, I would say the cause of all my suffering has its roots in self-justification and denial of the truth.

I have been deceived and I know how much it hurts—how humiliating it is to find yourself lied to.  You feel stupid and worthless for believing the lies—for not being smart enough to detect them.  But that goes back to the Wizard’s First Rule.  “People will believe a lie because they want to—because they want to believe it is true or because they fear it is true.”  People will lie to themselves and it makes it easy to let them believe those lies instead of telling them the truth. People don’t ask the right questions because they often don’t want to know the truth.

I seek the truth in everything and everyone. It is the only way I know how to live. I constantly move toward the truth.  I try to be honest with myself and others. The truth give you power, it does not take it away.  You can be strong in your vulnerability. Sometimes the truth is all you have.  The world can strip you naked of all your defenses, but the truth remains.  The core of your identity remains when all else is torn. People can use and abuse you, but they can’t take away the truth.

The Seeker of Truth is a Gnostic Hero and Savior.

Reading and writing and writing about reading are my passion. I've been keeping a journal since I was 14. I also write fiction and poetry. I published my first collection of short stories, "Radiant Darkness" in 2000. I followed that up with my first collection of poetry in 2001 called "Journey without a Map." In 2008, I published "Persephone's Echo" another collection of poetry. Since then I've also published Emotional Espionage, The Way The Story Ended, My Perfect Drug and Out There. I have my BA in English from The Ohio State University at Mansfield and my MA in English Lit from The University of North Carolina at Greensboro. I also have my Post BA Certificate in Women's Studies. I am the mother of two beautiful children. :-)
View all posts by carilynn27 →
This entry was posted in Literature/Pop Culture, Psychology, Religion and tagged lies, Phantom, Richard Rahl, Savior Archetype, Seeker of Truth, Stone of Tears, Temple of the Winds, Truth, Wizard's Rules. Bookmark the permalink.