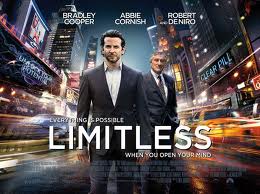 What would you do if you could a drug that would make your brain power limitless? That is the premise of that 2011 movie Limitless, which is based on the 2001 novel Dark Fields by Alan Gynn.  It is an interesting plot.  What writer hasn’t been down on their luck at some point? Instead of taking well known illegal drug, Eddie discovers a brand new unknown drug called NZT.  Instead of getting him high, it inspires him and clarifies things. Instead of feeling foggy he feeling like everything has suddenly just come into focus.   Although is obviously it is conscious altering, it seems no different than say an SSRI.  Well, maybe LSD and an SSRI.  Anyway, Eddie stops being a depressed alcoholic-writer and becomes a very successful and driven writer.  However, completing his novel is not enough.  Eddie craves more, but what?

What Eddie wants is more money.  This leads him to start playing the stock market, which leads him to become rich quick.  It seems that is the new American dream.  But even money and opportunities for self-improvement leave Eddie feeling empty.  He has limitless power, so what comes next? As it turns out, politics follows and he ends up Senator with his sites set on President of the United States one day.

If such a drug were available, I should think the limitless possibilities would go beyond what we normally desire.  Why wouldn’t one set their sites on the Noble Peace Prize or curing Cancer? Why couldn’t a person on NZT come up with a much more creative and nontraditional way of gaining power and perhaps a bit of immortality?  Because, let’s face it, if no one remembers you after you die all the power in the world doesn’t matter much does it?

I liked the idea that the drug made Eddie more enlightened.  It worked the same way as yoga, meditation and centering would by allowing him to be more aware of everything.  He was not only more alert, but able to make connections and recognize patterns.  This is the mark of true intelligence after all.  The drug is just supposed to enhance one’s natural ability.

Most days, I don’t think I need a drug like NZT.  My brain is already buzzing away making connections on its own.  When I am not distracted by overwhelming emotions, I can’ be right on target with my insights and inspirations.  There is power there even if it hasn’t earned me lots of cash or recognition yet.  However, if I could take a drug to erase the dyscalculia, I might try it.  If could calculate formals and remember sequences, I might have been more inclined to pursue some sort of career as a doctor or scientist.   It would be interesting, no doubt, to see what limitless possibilities would lie before me without any sort of handicap or disability to get in my way.  But, as far as I know, no such drug exists.  So everything from counting back change to conjugating verbs remains a struggle.  Careers in accounting and physics are out of the question.

Maybe I could be a superhero? Too bad there is already a Word Girl—that would be perfect for me.  I am not sure if I could ever fill the role of say Hit Girl in Kick-Ass.  I found the presence of an 11 year old girl assassin disturbing, but intriguing at the same time.  Kick-Ass is really a reflection of how ingrained the media is in our culture.  Reality and fantasy blurred quite a bit, so that the movie felt surreal.  It had a Reality TV vibe to it.  I liked that the Superhero got his ass kicked and stabbed for his efforts at helping some stranger.  That sort of awkwardness and cruelty is true to life.  But then to have the girl come in and kill everyone slips it back into a fantasy world.  The quest to do good is overwhelmed by the quest to kill the enemy before they killed by the enemy.  The purpose of the superhero falls by the wayside and the film ultimately fails I think.  Still, it was entertaining enough to watch.

The Warrior’s Way was much that way too.  The visuals were wonderful and I liked the fantasy elements to the backdrops.  Because of computers movies can now look like cartoons.  Anything is possible.  Anyway, the Western-Samurai movie had a bit of heart to it despite being very violent.  The Warrior does grow and change because of his experiences in the frontier town, but not without leaving a trail of dead bodies behind him.

This week I’ve focused on typing up my 1993 story Hurt No More.  I was impressed with my insight and flow. The story needed little revision.  I mused at how easily writing had once been to me.  Why had it gotten so difficult over the past 10 or 15 years?  My stories got short until I lost my focus entirely.  It was if I’d stopped taking my NZT only I was never on NZT to begin with.

I wrote the bulk of my stuff during 1992 through 1994.  Although struggling with depression, I think the traumas that followed would be more draining in the end.  I mean that the bad break-ups, drugs, alcohol, being rejected by lovers and even being robbed all took their toll on me.  Life just kept coming at me with a baseball bat over the years it seems.  It is no wonder that I’ve lost brain power over the years!

The good news is that since I’ve been on the meds for bi-polar that I’ve been able to focus on typing up and revising.  I’ve accomplished a lot since April or May.  I know I am laying a good foundation for my writing career and that all my work will pay off eventually.

Reading and writing and writing about reading are my passion. I've been keeping a journal since I was 14. I also write fiction and poetry. I published my first collection of short stories, "Radiant Darkness" in 2000. I followed that up with my first collection of poetry in 2001 called "Journey without a Map." In 2008, I published "Persephone's Echo" another collection of poetry. Since then I've also published Emotional Espionage, The Way The Story Ended, My Perfect Drug and Out There. I have my BA in English from The Ohio State University at Mansfield and my MA in English Lit from The University of North Carolina at Greensboro. I also have my Post BA Certificate in Women's Studies. I am the mother of two beautiful children. :-)
View all posts by carilynn27 →
This entry was posted in Literature/Pop Culture, Movies/TV, Psychology, Writing and tagged Alan Glynn, Dyscalculia, Hit Girl, Hurt No More, Kick-Ass, Limitless, NZT, THe Dark Fields, The Warrior's Way, Word Girl, Writing. Bookmark the permalink.