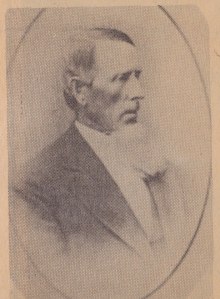 Mansfield Hedges Gilkison was the first white male born in Mansfield, early historians agree.  That was back on February 2, 1811.

What’s more Norman Gilkison is reportedly the “spittin’ image” of his pioneer relative.  Norman said, “He had a Roman nose, generous ears and wore a healthy beard, but I am no doubt judging him from pictures, that he was as tall as I am.”  Norman is six foot tall.

Norman was the son of Grover Cleveland Gilkison, brother of Mrs. Daum.  He had been an expressman for the historic Wells-Fargo Express Company.

The city’s first born male was the son of John C. Gilkison, to whom the local kin also point with pride.  A printer by trade, he is credited with establishing Mansfield’s first newspaper, The Olive.  He also was a printer on another early paper, The Mansfield Gazette, which was own by James Purdy.

“I was always proud that he was a newspaperman,” Norman, an avid reader, said.

His pride was shared earlier by General Roeliff Brinkerhoff, who wrote in A J Baughman’s 1908 History of Richland County about the father and son.  “I know both John C. Gilkison and his son Mansfield well.  Both were excellent citizens. “

Norman recalled a couple of stories passed down by his family.  One concerned the printer and his brother James, who became lost as young boys.  They were found and returned by local Indians.

Norman told also of his grandfather, Willard, who as a lad climbed atop the Mansfield Building to see “a hanging” of a murder.

“When my grandfather got down and started to run home he found a diamond ring that had been taken in a robbery, which was the motive in the murder,” he said.

Norman Gilkison, 6’ is a former farmer and manufacturer, also has had an interesting life.  For a while he lived in a log cabin near where the Mansfield-Lahm Airport is today.  He attended Bowman Street School when H.L Creveling was principal and Mansfield High School when Jesse Beer was principal.  He graduated in 1929.  He attended Adelbert College of Case Western Reserve University for two years.  He also attended night classes at the Cleveland State University.

He established the Gilkison Manufacturing Company in Mansfield (it made furniture) and later operated it Elyria.  For a while he also operated a motel in the desert area of Bouse, Arizona. He also worked for Mansfield City parks, but has since retired.

Reading and writing and writing about reading are my passion. I've been keeping a journal since I was 14. I also write fiction and poetry. I published my first collection of short stories, "Radiant Darkness" in 2000. I followed that up with my first collection of poetry in 2001 called "Journey without a Map." In 2008, I published "Persephone's Echo" another collection of poetry. Since then I've also published Emotional Espionage, The Way The Story Ended, My Perfect Drug and Out There. I have my BA in English from The Ohio State University at Mansfield and my MA in English Lit from The University of North Carolina at Greensboro. I also have my Post BA Certificate in Women's Studies. I am the mother of two beautiful children. :-)
View all posts by carilynn27 →
This entry was posted in Genealogy, History and tagged Case Western Reserve University, Elyria, Fred Gilkison, Gilkison Manufacturing Company, John C Gilkison, Mansfield, Mansfield Hedges Gilkison, Norm Gilkison, Ohio, Ruth Daum, The Mansfield Gazette, The Olive, Willard Gilkison. Bookmark the permalink.