Name of Mansfield Passed Along From Man To Town To Man

Name of Mansfield Passed Along From Man To Town To Man 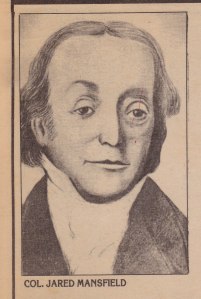 The town bears the name of Col. Mansfield, who was the US Surveyor General when the city on the hill was founded in June of 1808.

Gilkison, who was given the name of the surveyor General and General James Hedges one of the town’s founders — was the first white child born in Mansfield.

Gilkison lived here throughout his life time, but there is no evidence that Col. Mansfield ever visited here.  The town’s founders gave Mansfield a lot North Main Street near Central Park, but he never claimed it and the property passed to other owners.

Col. Mansfield was born in New Haven, Connecticut in 1759.  He attended Yale University in New Have and he was an able student, although there is evidence that he was not very well behaved.  He was expelled his senior year for “discreditable escapades,” but historians neglected to tell us what he did.  His parents must have been influential people, for they were able to get him reinstated so he could graduate.  He got his degree in 1878 and the school conferred an LL.D. on him in 1825 after he had shown he was a pretty able fellow.

He became an author, teacher and expert mathematician and was recognized as one of the country’s most outstanding scientists.  Thomas Jefferson was impressed with Mansfield’s credentials and named him Captain of Engineers in the US Army after Jefferson became president.  He also served as professor of philosophy at West Point Military Academy.

Mansfield was named surveyor general in 1803, the year Ohio was admitted to the Union and five years before the town of Mansfield was founded.

Col. Mansfield also served as rector of Hopkins Grammar School in New Haven.  He was given the rank of Lieutenant Colonel while was Surveyor General. After his retirement as Surveyor General, he returned to his teaching post at West Point.  During the final years of his life, he lived in Cincinnati.  If he ever got this far North to see the town that was named for him, historians failed to mention it.  He died February 3, 1830, while on a visit back to his home in New Haven.  He was 71.

Surveyors were scattered all across the Ohio territory in the early 1800s as this part of the country was being opened to settlers.  Hedges was one of those surveyors and one of the early leaders in getting town established where Mansfield now stands.

Gilkison said that Hedges asked for the privilege of naming him as the first child in born Mansfield.  Hedges promised to give the young Gilkison a lot in the new settlement.

Gilkison was born February 2, 2011, in a cabin building by his grandfather George Coffinberry, opposite the southwest corner of Central Park. The corner was the site of hotels for many years.  The last one at that address was the Southern.  The corner lot is now a parking lot.

For many years there was a question about the identity of the first child born in Mansfield.  Some of the pioneers said Matilda Cunningham should have the honor.  She was born in 1809 in a cabin built by Jacob Newman.  It was determined, however, that the Newman cabin was on South Main Street, a short distance from Ritter’s Run.  The property was on Newman’s farm, which was outside the town’s limits.

Gilkison was the son of Mr. and Mrs. John C. Gilkison who came to Mansfield in 1810.  His father published The Olive, the town’s first newspaper.  The Olive lasted only two years because the community was too small to support a newspaper.  It was founded in 1818.

Mansfield H. Gilki8son saw Mansfield grow from a cluster of cabins to a town of some 5,000 during his lifetime.  He was a great source of information for historians A.A. Graham and A.J. Baughman. Baughman also got a vast amount of information from his mother, Elizabeth Baughman, who was one of the county’s earliest pioneers.

Mansfield H Gilkison was engaged in law enforcement much of his life.  At various times he was deputy sheriff, town marshal and constable.  Because of his work and his family, he knew virtually everyone in Mansfield and was often interviewed by news reporters.  Because he was so close to his home community, he knew the leaders, the trouble makers and the people on whom he could depend.

Gilkison was married twice.  His first wife was Emeline Dukes.  They had four sons and three daughters.  His second wife was Mattie Stewart, whom he married just a year before his death.

Gilkison, of course, attended Mansfield’s early schools and he knew much about them.  He recalled that one of the early teachers was a man named O’Brien who was a good teacher, but drank too much.  Another teacher who was named Timberlick had the same problem.

The first school house Gilkison could remember was a small framed building on North Diamond Street that was between Dickson Avenue and Fourth Streets.  The site is now a city parking lot.  It is likely that the school was built there since it was only a short distance from the Big Spring at East Fourth and Adams Streets.

Gilkison died at his home at 68 Diamond Street on February 23, 1885.  He was 74.  The Masonic Order, of which he was a member, conducted a funeral at his home.  He was buried in Mansfield Cemetary, but there is no marker at his grave.  There is foot anew to now have one erected.

That early Gilkison family lived for a time on Park Avenue West between Walnut and Mulberry Streets.  There was a school in the upper room of the home and a there was a teacher who was a handsome young fellow named James Stewart, who later became county judge.  Sometimes the pupils in the little school got pretty noisy and Mrs. Gilkison, Mansfield’s mother, didn’t like it, so the school moved to a new building next door.

One of Stewarts’s pupils was a pretty young girl, Margaret Loughridge.  He married her in 1826.  They had a daughter, Cecelia, who married John Sherman, Mansfield’s great statesman.

Four years ago a peppery gentleman named Fred Gilkison came her from his home near Buffalo, New York, to visit his sister, Mrs. Ruth Daum.  Mansfield Hedges Gilkison was their great-grandfather.  Their father was Willard Gilkison.  The siblings grew up in Mansfield and lived for a short time on Bowman Street and Buckingham.  The children went to Creveling School where the late H.L. Creveling was a teacher.  Willard Gilkison at one time operated a grocery store at Fifth and Mulberry Streets.

Coul Street bears the name of Conrad C. Coul who was the great-grandfather of Mrs. Daum and her brothers.  Coul had a role in the development of the near north side of Mansfield.

It is obvious that the Gilkisons have been a family of influence for many years.

The first newspaper, The Olive, didn’t have a very powerful voice though, since it had to depend on readers in neighboring Huron County for a lot of its patronage.  Huron County at the time had paper or printing establishment of its own.

John C Gilkison, the editor and publisher of The Olive, described his venture into the publishing business this way:  “The Olive is what is termed a medium sheet and it was printed on what we would call worn-out type and old Ramage Press.  The entire establishment cost about $150.  At the time The Olive was first started Richland County contained about 1,000 voters.  Mansfield’s homes were chiefly log cabins and framed buildings.  In politics the Olive advocated Whig principles.”

Reading and writing and writing about reading are my passion. I've been keeping a journal since I was 14. I also write fiction and poetry. I published my first collection of short stories, "Radiant Darkness" in 2000. I followed that up with my first collection of poetry in 2001 called "Journey without a Map." In 2008, I published "Persephone's Echo" another collection of poetry. Since then I've also published Emotional Espionage, The Way The Story Ended, My Perfect Drug and Out There. I have my BA in English from The Ohio State University at Mansfield and my MA in English Lit from The University of North Carolina at Greensboro. I also have my Post BA Certificate in Women's Studies. I am the mother of two beautiful children. :-)
View all posts by carilynn27 →
This entry was posted in Genealogy, History and tagged Bowman Street, Buffalo, Cari Lynn Gilkison, Col Jared Mansfield, Conrad C Coul, Emeline Dukes, Fifth Street, Fred Willard Gilkison, H.L. Creveling, Huron County, Jacob Newman, John C Gilkison, Mansfield Cemetery, Mansfield Hedges Gilkison, Mansifeld, Masonic Order, Matilda Cunningham, Mattie Stewart, Mullberry Street, New Haven Connecticut, New York, Ohio, Park Avenue West, Richland County, School, The Gazette, The Olive, Virigil Stanfield, West Point Millitary Acedemy, Willard Gilkison. Bookmark the permalink.