Murder Takes the Stage at SHS

Murder Takes the Stage at SHS

By Mike Magnuson, Staff Writer at the Daily Globe

Students at Shelby Senior High will be parties to murder most foul when “Bull in a China Shop” opens on the Little Theater Stage November 15th and 16th.

“It is a short of cross between The Golden Girls and Arsenic and Lace,” said Jim Hunter, who directs the play.  The plot revolves around a group of spinsters living together in a boarding house in the 1950s. They decided to kill off one of their own to attract the attention of one of the police detective who lives across the street, Hunter confided.

The ploy fails, however, causing the unmarried elderly ladies to enlist the aid of a female reporter, who also ends up pursuing the dashing detective.

The teacher would not give away any more of the plot, but encouraged the public to attend Friday and Saturday’s performances for the startling conclusions.

“This was my senior class play,” Hunter noted with nostalgia.  He and his Ashland High School classmates performed the play in 1960, the same year it came out, he said.

“We’ve been at it beginning in Mid-September,” Hunter said.  Auditions were held early in the month and the first read through of the play was conducted around September 15th cast members estimated.

Since that time the cast has rehearsed and prepared for opening night.  Crew members gathered spotlights and necessary equipment for their first technical rehearsal Monday evening.  The cast’s first dress rehearsal took place that same night without make-up, after just having assembled the necessary costumes.

Page Lynch acts out the role of Jane Rogers, the reporter and Jason Gilbert rounds out the cast as Johnson, the finger print expert. 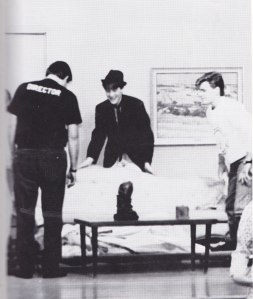 Reading and writing and writing about reading are my passion. I've been keeping a journal since I was 14. I also write fiction and poetry. I published my first collection of short stories, "Radiant Darkness" in 2000. I followed that up with my first collection of poetry in 2001 called "Journey without a Map." In 2008, I published "Persephone's Echo" another collection of poetry. Since then I've also published Emotional Espionage, The Way The Story Ended, My Perfect Drug and Out There. I have my BA in English from The Ohio State University at Mansfield and my MA in English Lit from The University of North Carolina at Greensboro. I also have my Post BA Certificate in Women's Studies. I am the mother of two beautiful children. :-)
View all posts by carilynn27 →
This entry was posted in News and tagged Aaron Bueno, Angela Wilt, Anita Clagg, Becky Stevens, Brian Betts, Brian Walker, Bull in a China Shop, Cari Gilkison, Daily Globe, Daniel Osborne, Detective Dennis O'Finn, Fingerprint Expert, Fred Gomez, Jamie Reardon, Jane Rogers, Jenny Dabney, Jim Hunter, Jodie Saunders, Julie Young, Katie Grin, Kieth Dabney, Kristin Giese, Little Theater, Maria Hartings, Mary Potter, Mike Magnuson, Miss Amantha, Miss Birdie, Miss Elizabeth, Miss Hildegard, Miss Nettie, Page Lynch, Ralph Shank, Shelby Senior High, Stacy Yeager, Stretcher Bearers. Bookmark the permalink.