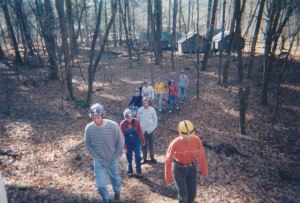 We woke up at 5:45am on Saturday morning and got ready.  We left for the Outdoor Adventures office at 6:30am.  We got there at 7am and loaded our stuff up into the vans before heading out. The drive up to Virginia was a beautiful one.  It was misty and very magical out.  Very fitting I thought as I read The Fellowship of the Ring on the drive up there.   I felt almost as if I had slipped back to Middle Earth, where magic was still alive and common place.

We got to the cave at Mount Rogers around 10:30am.  After strapping on our helmets and lights we headed to the cave from our parking spot.  We began at the difficult end.  The 15 of us dove down into a dark hole one by one—crawling on our hands and knees and then wriggling on our bellies.  Finally, after about five minutes or so—we came to a large cavern.  Our guides took us around a series of passages.  We were able to explore it bit, checking out dead ends and various nooks.  We got a turned around, but then found our way out.

We ate lunch out by the van and then drove half an hour or so to the Speedwell Caverns.  We stopped at a tiny gas station that had one tiny bathroom.  It left a lot to be desired, but at least we didn’t have to outside in the cold.  Since all of us used it before finishing our journey to the second cave it overflowed.  Oh well.  We drove the half hour the rest of the way to the cave which was much more challenging.

We squeezed through a tight passage and up a small incline to a very tiny hole.  One by one we slid down the spiraling hole feet first—like Alice down the rabbit hole—into a very small cavern.  We slid on our bellies once again a ways before coming to a bigger cavern.  Then we came to what is called The Toilet Bowel.  We climbed into the naturally formed spiral that emptied into another tiny hole, which wasn’t visible from above. It was much like climbing down into a sewer system—very cramped and damp.  We pulled ourselves into another cavern—not much higher than the first, but a little wider at least.

As we exited, we passed by a tiny sleeping bat on the ceiling of the cave.  Even when I shined my light on it and snapped a picture it didn’t move.  I think after that we went down another hole, this time feet first.  From there we faced a small pool of water and steep climb up some very muddy, slippery rocks.

cavern. There was used a rope to climb up onto another platform.  This part of the cave gave me the creeps because of the bat parts littered on the ground.  I guessed it was perhaps some Sadistic—maybe even Satan-Worshiping—teenagers.  It was good to move onward and upward toward the light.  The path spiraled up and finally outside.  We emerged into the cool, but not cold, afternoon.  Most of changed out of our clothes red with mud.  Then we piled into the van and headed home.

I did have a lot of fun and felt better for getting out and being active.  Images of The Lord of the Rings, Goonies and other movies came to mind as I thought about my experience.

It was very different from my first cave experience ten years ago.  Mom took Elizabeth and me to Seneca Caverns.  It wasn’t very large and we didn’t go very far before it dead ended into a very small pool of water—not much more than a puddle really.

Reading and writing and writing about reading are my passion. I've been keeping a journal since I was 14. I also write fiction and poetry. I published my first collection of short stories, "Radiant Darkness" in 2000. I followed that up with my first collection of poetry in 2001 called "Journey without a Map." In 2008, I published "Persephone's Echo" another collection of poetry. Since then I've also published Emotional Espionage, The Way The Story Ended, My Perfect Drug and Out There. I have my BA in English from The Ohio State University at Mansfield and my MA in English Lit from The University of North Carolina at Greensboro. I also have my Post BA Certificate in Women's Studies. I am the mother of two beautiful children. :-)
View all posts by carilynn27 →
This entry was posted in Travel and tagged Bats, Cari Lynn Vaughn, Caves, Elizabeth Keene, Jason Vaughn, Mt Rogers, Outdoor Adventures, Rabbit hole, Senaca Caverns, Speedwell, Spelunking, Toilet Bowl, UNCG, Virginia. Bookmark the permalink.