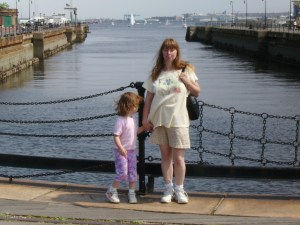 We got up around 9:30am, ate and got ready to go.  We drove from 11am until 8pm.  We took so long due to the horrible traffic in New York and Connecticut.  It was bumper to bumper and moving at about 15-25 miles per hour for 100 miles or more.

We arrived in Wakefield, Rhode Island at about 8pm.  We dropped our stuff off at the Sugar Loaf Bed and Breakfast and then went to eat a late dinner at the Italian Village where Jason used to work when he was only 13 years old.  It was great food to be sure.  Then we went back to the B&B to sleep.  It was a nice old house with lots of character and hospitality.

At 9am we awoke and ate.  We spoke to the owners—Dave and Stephanie Osborne.  They recommended places to see and things to do.  We paid and left after a brief walk around gardens and taking showers.

Jason drove by the places he used to live.  Then we stopped to buy

me some incense, this diary and more A34 stuff for the air conditioning in our vehicle.  Finally, we drove to Narragansett, Rhode Island. We were surprised to see how crowded it was.  Well, I was surprised.  Jason remembered the Rhode Island beaches being much busier than the North Carolina beaches we’d visited.  It took forever to find a place to park and then we still had to pay $8 and walk a long way.  Once we got onto the sand that was all forgotten. 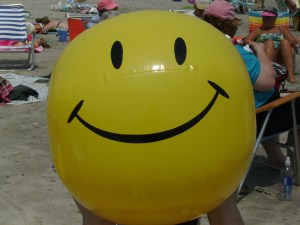 Ana dug in the sand and we all went in the water.  It was too cold two swim, but we still had fun wading.  We wanted to stay longer, but we had to leave after only a couple of hours.  We really hated to pay the $5 per person fee on top of parking and not spend all day there, but we were on a tight schedule.  Rhode Island was indeed expensive, but very nice.

That afternoon we drove to Bedford, Massachusetts.  Our hotel had changed names on us, so we were a bit confused.  We figured it out eventually and checked in.  We drug all our luggage inside.  The hotel was unusual in that it was a V shape or a triangle on the corner of an intersection.  It was set up like a motel with a courtyard in the center.  We ate some bad Chinese food at a place called The Wall.  Afterward we got some groceries at Stop and Shop using our Ohio Food Stamp card.  Then we browsed the paper store.  When we got back, Jason and Ana went swimming while I did postcards and rested.  I was wiped out from the days events.

Sunday we drove to downtown Boston.  We hadn’t planned our

activities at all, so we weren’t sure where to head first.  We went around in circles a bit.  Finally, we stopped and Jason figured out how to get to The Constitution—a huge historic ship.  We parked a mile away at Massachusetts General Hospital and walked all the way from Pier 13 to Pier 1.  We got in line, but by the time we were ready to take the tour my IBS acted up.  (Being six months pregnant didn’t help!) I dashed out on Jason and Ana to go to the nearest restroom.  They wandered the top of the deck and came to find me.  We had a snack, took a quick trip around the museum and then walked back to the car.  It was 3pm and time to leave already.  We regretted not having time to see anything else.  At least I caught a glimpse of the city.  It felt older and had more character than newer cities.

Jason drove us to the next hotel back in Pennsylvania.  We took a slightly different route that by-passed New York City and New Haven.  Instead, we went through the middle of both Massachusetts and Connecticut—passing through Hartford this time.  We stopped a couple of times, but traffic wasn’t too bad.  Finally, at nearly 9pm we arrived in Scranton-Dunmore.  We checked in, ordered pizza and slept

Monday, Ana awoke at 8:30am.  We ate breakfast at 9am. We left the hotel at 11am and bought more 34A since we had a major leak and last can didn’t last too long.  Ana slept and then played on the playscape when we stopped at McDonalds for lunch.  She was disappointed that the last hotel didn’t have a swimming pool.  Anyway, we stopped once for gas about 50 miles or so before the Ohio-Pennsylvania boarder.  We expected to arrive home between 6 and 7pm.

The millage we drove the past four days has been exhausting.  We could have managed the $1,000 plane tickets to get to Rhode Island and Boston, but then we would have had to rent a car, which could have been quite costly.  We crammed a lot in a short period of time, but overall it was worth it I think.  It was nice to get away from home and our boring routine.  However, Jason and I never got the time alone that I’d hoped for.  We were both too tired to spend any intimate time together once Ana fell asleep each night! 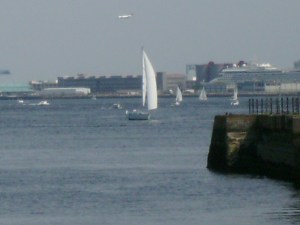 Reading and writing and writing about reading are my passion. I've been keeping a journal since I was 14. I also write fiction and poetry. I published my first collection of short stories, "Radiant Darkness" in 2000. I followed that up with my first collection of poetry in 2001 called "Journey without a Map." In 2008, I published "Persephone's Echo" another collection of poetry. Since then I've also published Emotional Espionage, The Way The Story Ended, My Perfect Drug and Out There. I have my BA in English from The Ohio State University at Mansfield and my MA in English Lit from The University of North Carolina at Greensboro. I also have my Post BA Certificate in Women's Studies. I am the mother of two beautiful children. :-)
View all posts by carilynn27 →
This entry was posted in Travel and tagged Anastasia Vaughn, Bedford, Boston, Cari Lynn Vaughn, Dave and Stephanie Osborne, Hartford, Jason Vaughn, Massachusetts, McDonalds, Narragansett, New York City, Ohio, Pennsylvania, Pregnancy, Rhode Island, Scranton-Dunmore, Sebastian Vaughn, Sugar Loaf Bed and Breakfast, The Italian Village Resturant, The USS Constitution, Wakefield. Bookmark the permalink.