I went to many places in Oklahoma during the three weeks I was there.  My plane landed in Tulsa, but I also visited Chandler, Cushing, Davenport, Edmund, Enid, Oklahoma City and Stroud.  Perhaps the most adventurous part of the trip was when I went to TenKiller Lake with my cousins. 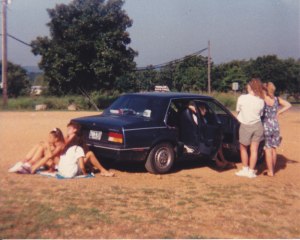 I couldn’t sleep.  I didn’t drift off until 1am.  I got up 5am and quickly got dressed.  We ate and sped over to Carlene’s house.  We were running late.  After some confusion and readjusting, we were all on our way.  We got some gas in the Mini Van and got some food for lunch and then waited.  I guess someone got lost and we had to wait for them to catch up.  We waited for over two hours in the parking lot under the hot summer sun. Tara, who is pregnant, complained a great deal.  Finally we continued on and reach Ten Killer Lake.  We put our things in one of the two cabins that they had rented and then changed into our bathing suits.

We talked to the shore to go swimming.  The lake was part of an old

quarry, so it was very deep.  Big rocks jetted out into the lake and then there was this huge drop off.  I showed off my swimming skills and swam back forth to the buoys.  Then I practiced diving off of a small cliff.  For awhile I floated a raft with the girls.  Jason, Jeff and Shawn had fun taking of the raft and kicking us off.  I had a good time.

Oh and there was this moment that I had everyone’s attention.  I held my breath a really long time and dove down as far as I could.  Jason and Jeff panicked, thinking maybe I’d hit my head and drowned.  They dove down, trying to find me.  When I came up, they were so relieved.

Later that afternoon the guys rented a pontoon boat to use to fish.  All of the women took turn taking rides, but I stayed on all day. They actually let me drive the boat for awhile and then I let Bob drive while I joined Jason and Jeff in diving off the island cliffs.  Everyone else was afraid but me.  I climbed eagerly up to the cliff where Jason and Jeff were and dove off.  It had to be at least 20ft or more.  What a rush!  I must admit, I was a little scared, but I couldn’t chicken out in front of the guys. So I dove and it was great.  But once I dove, I was scared that my bikini top would come off from the force of the dive.  It slipped off during meager diving board dives, so I hated to think what would happen when I dove 20ft.  It didn’t come off though, so I dove several more times.

Then all of us went back to the boat.   I stayed on for awhile, but moved from the sun to shade.  I knew I was already sunburned.  I should have gone ashore before, but I was too stubborn. We swam a little more.

About super time Bob dropped Jason, Jeff and myself off and went to return the boat.  We waded through the water.  I slipped on a rock, but Jeff caught me!  Then as we walked on the gravel to the shore, Jeff complained about the gravel hurting his feet.  It didn’t hurt mine. I guess going barefoot all summer has paid off.

Anyway, we went back to the cabins and chilled for a bit.  There was some confusion at first, but it is all settled now.   The guys went for a walk and I decided to write.  Nichelle and Tara are napping.  I told everyone earlier that I had decided to write a story about them—Nichelle, Tara, Coleen, Cathleen, Darleen, Mavoreen, Ileen and Moreen and Jeff.  Well, my sunburn really hurts, but I had lots of fun.

1:00am: Everyone is asleep now.  The cabin is dark.  Oh, what a night.  Everyone came back from walking or whatever and I stopped writing.  I was upset to find out the Jason and Jeff went Jet Skiing without me!  Anyway, I went to bed and everyone else went out to eat.  I was really sunburned and had a horrible headache.  I was sun-sick I guess.  I dozed a bit, finally alone with some peace and quiet.  Then it stormed outside and I woke up.  I laid there for what seemed like forever before everyone came back.  I pretended to be asleep while they discussed sleeping arrangements.  The guys wanted the cabin that we were in, which was fine except for the fact that I was in there.  They debated on rather to leave me there or wake me up to go to the other cabin.

A few minutes later Nichelle came in to get me.  Groggily, I got up,

put on my shoes and shuffled over to the other cabin.  I fell into bed there, but I couldn’t sleep with all the racket in the other room.  I laid there listening to everyone again.  I heard Lindsay say she had a crush on Jeff.  Eventually everyone quieted and slept.  I woke up several hours later from a nightmare.  Feeling sick and scared, I went outside.  I sat on the porch wishing someone would come and hold me.

In an effort to comfort myself I decided to write.  It isn’t easy to write in the dark with only a flashlight under the covers….

I fell back asleep and dreamed.  I awoke some time later after all the other girls did.  I got bored writing and decided to use the shower.  All the guys were ready already, so I went over three and used their bathroom.  There was lot of confusion as we packed up.  I tossed a football around with Jeff and Jason and the other guys while I waited.  We divided up a little while later and drove home.

Well, we went to KFC first.  We ate lunch and bid goodbye to those relatives going back to Arkansas.  All the sisters gave me encouragement in my writing and told me they were glad that they had met me.  I then decided to ride the rest of the way back with Jason and Jeff. 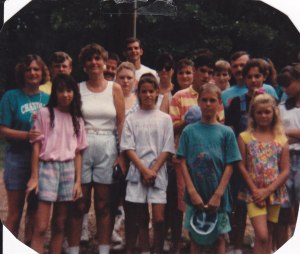 I laid down in the back seat and was going to sleep, but then Jeff said “Good luck.  In here, we blast!”  And then he turned up the radio.  I gave up on sleeping and played the sign game with Jason and Jeff.  Then we played the alphabet game, which was fun until we came to the letter X.  No one could think of an animal name that began with X.  I enjoyed the ride and felt pretty comfortable with them.

Anyway, we got to Shawn’s Mom’s house first.  The door was locked, so Jeff broke in.  We got in and hung out a bit.  Then Nichelle came and we left.  Everyone but Jeff, who is currently living there with Shawn’s parents, left.

We got back to Norm and Kathy’s—my temporary home.  I read my letter from Mom and watched Saved by the Bell.  I am going to go swimming shortly. 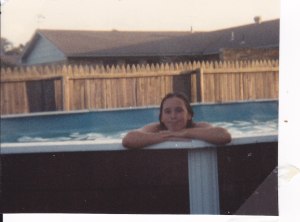 Reading and writing and writing about reading are my passion. I've been keeping a journal since I was 14. I also write fiction and poetry. I published my first collection of short stories, "Radiant Darkness" in 2000. I followed that up with my first collection of poetry in 2001 called "Journey without a Map." In 2008, I published "Persephone's Echo" another collection of poetry. Since then I've also published Emotional Espionage, The Way The Story Ended, My Perfect Drug and Out There. I have my BA in English from The Ohio State University at Mansfield and my MA in English Lit from The University of North Carolina at Greensboro. I also have my Post BA Certificate in Women's Studies. I am the mother of two beautiful children. :-)
View all posts by carilynn27 →
This entry was posted in Travel and tagged Bob Campbell, Cabins, Cari Lynn Gilkison, Chandler, Cliff Diving, Darleen Campbell, Davenport, Fishing, Jason Gilkison, Jeff Levy, Jet Skiing, Kathy Gilkison, Nichelle Campbell, Norm Gilkison, Oklahoma, Pontoon Boat, Quarry, Shawn Campbell, Tara Campbell, Tenkiller Lake. Bookmark the permalink.