A dark rainy New York Night.  The gothic buildings, crowded streets, loud and aggressive taxis, lights and horns…These are the overwhelming sights and sounds that blend into one feeling, which a is a mixture of movies and stories that come to mind.

We went to Mansfield and picked up his check and then went to the bank and post office.  Then we went to Auto Zone and finally headed on out.  As trees and hills passed my by, I read mostly.  I finished both Freud and Hawk.  I napped and watched the Allegheny and the Poconos pass by.  I paid attention to Jason and played with the radio.  We stopped 3 or 4 times and 8 hours later we were in Manhattan.

We went round and round trying to find 46th.  We were nervous about running out of gas before we ever found our hotel.  But finally we found the Comfort Inn and then we found a gas station.  We parked on 44th and walked to our hotel.  It is a small room, but nicely decorated.  We settled in and then called our parents.  We walked around that night and ended up eating at this tiny Pizzeria.  It was delicious.  Then we hit tourist stores along Time’s Square.  And then after that we came back to the hotel to go to sleep.  I fell asleep fast!

This morning thunder rumbled and I woke up.  I laid in bed wondering how everyone I know would react to the Big Apple. I want to feel like I belong wherever I go.  I don’t want to be a small town girl in a big city.  And you know I sort of feel like I do belong.  Or least like I could anyway.

We ate breakfast—the free continental breakfast offered by the

hotel—at Niño’s.  It was good, but not enough.  So we went to the 3 story McDonald’s.  Then we passed the NYC Public Library on our way to the Empire State building.  It was too cloudy to see, so we kept walking until we go to Union Square.  We went to the Barnes and Noble there.  It was similar to the one I work at, except it was like 10x bigger!  I asked for directions and then took the Subway to Battery Park. 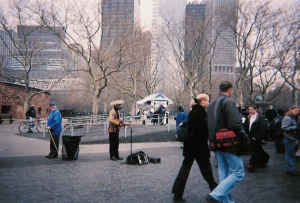 We took the Staten Island Ferry without getting off on Staten Island.  Instead, we returned and took the other Ferry to Liberty Island.  We got our tickets to go inside the Statue of Liberty.

It took us 1 ½ hours to walk up the stairs to the crown, but only because the line was so long and so slow.  Once we got to the crown I was surprised at how small the space was.  It was a nice view though.  I wondered what the statue really meant.  Are any of ever really free?  Is America all it is cracked up to be?  Then we moved on to Ellis Island.  It was interesting.  I felt the same sense of hope as I felt at the Statue of Liberty.

Eventually we made it back to Manhattan and ate at a Deli.  Once we’d eaten we decided to visit the World Trade Center.  We were too poor to go onto the observation decks.  So we hopped on the subway and rode back to 42nd Street and Times Square.

As we sat on the subway, I looked around at all the different people.  Today I heard French, Spanish, German and Italian spoken and

maybe more I didn’t recognize.  I saw people young and old.  I saw business people and tourists alike.  Odd how close we were all were existing in this urban setting and yet there is still this distance between all of us.  My thoughts turned from the people to the general dark mood of the underground subway.  There was this mystery and danger here that co-existed with the hubbub of culture and life up above.  New York City has a unique energy and yet it represents so much of life itself.

We walked from Times Square to our hotel, where we are at now.  Jason is watching TV; although he is hungry and ready to go on to explore more places.  I’ve sat down to put words to all the things that I’ve experienced and to relax.  I’m ready for bed, but also ready for whatever tomorrow brings.

Tall Mountains roll languidly toward the horizon.  It seems vastly different from the urban jungle of NYC, and yet it isn’t.  Both landscapes rise up toward the heavens, leaving humans in awe.  The only thing is that NYC is a human creation and the mountains are natural.

Anyway, Thursday we woke up.  I gave Jason some attention and then got my shower.  We got ready and headed out to McDonald’s, which was just around the corner.  Then we began our long trek to Central Park.  We took notice of all the different stores as we strolled through there.  It was quite nice.  Then we stopped at the Metropolitan Museum of Art.  We wandered through its maze of halls and through the maze of time!  We passed through the Greek and Egyptian Art exhibits to the Medieval Suits of Armor and then Tapestries.  Finally in was up to Colonial France and America.  Tired and hungry we left without out seeing the rest.

We strolled back through Central Park eating our Street Vendor

Bought hot dogs and pretzels.  No luck in finding the Sony Imax, so we continued down from 83rd all the way down to 33rd and the Empire State Building.  It took us 45 minutes to get to the 86th floor.  It was an awesome view though.  Definitely worth braving the cold and the wind to see it

It was then to eat at a Pizzeria and back to the hotel.  I took some medicine for my headache and laid down.  I fell asleep for a tiny bit and then I got up.  We had originally wanted to see King Lear, which was playing just a few buildings down, but I didn’t have the energy.  There was too much to do and too little time.  I laid back down and then later we left to get some ice cream at the Hagen Daas.  It was funny that Jason actually knew where it was as if we lived there or something.  We were getting used to city life and things being open all day everyday.

I was both happy and sad to leave.  On the one had there was so much to experience yet, but on the other hand I wanted to go home so I could share my adventures with everyone.  Anyway, we went back to the hotel because my upset tummy and went to sleep. 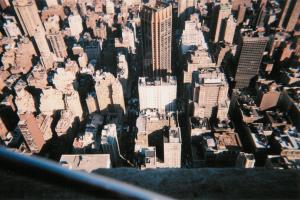 Today we got up and got ready.  We check out and ate breakfast at McDonald’s and then got the car out of the parking garage.  We picked up our luggage at the hotel and then began our journey home.  Now we are somewhere in the middle of Pennsylvania and about 140 miles from the Ohio boarder.  It was a good trip.  It was nice to have the time off and spend it with Jason.  I do feel closer to him and myself.

So here I am trying to put together the experience of NYC, my future

and the situation at hand.  I think NYC is teaching me or has taught me that to think bigger and to have more confidence.  I can survive in the big city after all.  I can graduate from College.  I can have a career and I can have a long-last relationship with Jason.  I can be happy!

Reading and writing and writing about reading are my passion. I've been keeping a journal since I was 14. I also write fiction and poetry. I published my first collection of short stories, "Radiant Darkness" in 2000. I followed that up with my first collection of poetry in 2001 called "Journey without a Map." In 2008, I published "Persephone's Echo" another collection of poetry. Since then I've also published Emotional Espionage, The Way The Story Ended, My Perfect Drug and Out There. I have my BA in English from The Ohio State University at Mansfield and my MA in English Lit from The University of North Carolina at Greensboro. I also have my Post BA Certificate in Women's Studies. I am the mother of two beautiful children. :-)
View all posts by carilynn27 →
This entry was posted in Travel and tagged Allegheny, Battery Park, Cari Lynn Gilkison, Empire State Building, George Washington Bridge, Jason Vaughn, Liberty Island, Manhattan, Metropolitan Museum of Art, New York City, Poconos, Staten Island, Statue of Liberty, Subway, Times Square, Union Square, World Trade Center. Bookmark the permalink.