It was a warm day for December and so we decided to head out to Dinosaur Ridge in Morrison, Colorado.  There was no admission fee to visit.  The only hidden cost was if you chose to park and ride the tour bus up to road.  It used to be open for the general public to drive on, but then they closed off the road to keep it in better shape I guess.  We chose to walk the two miles around the ridge and then back down, which was quite tiring.  Sebastian wanted held part of the way and the wind the whipped through the foothills made it a chilly walk despite the warm sun. 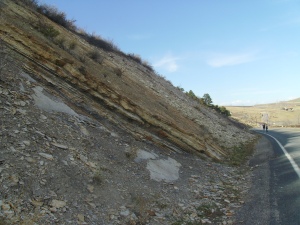 Anyway, it was a fascinating walk through history.  Seeing the fossils of bones and the footprints in the ridge was more impressive than seeing them in a museum.  To think these giants once lived and died right where we were standing was awesome.

Dinosaur Ridge is one of the world’s most famous dinosaur fossil localities.  In 1877, some of the best-known dinosaurs were first discovered by Arthur Lakes, a professor at the Colorado School of Mines in Golden.  These included Apatosaurus, Stegosaurus, the Colorado State Fossil; and Allosaurus.  These specimens represent animals that lived 150 million years ago in the Late Jurassic Period, also known as the “Age of Giants.”

These discoveries sparked a historic dinosaur rush that traced the bone-bearing strata, known as the Morrison Formation across a large part of the Rocky Mountain region.  This “Golden Age” of 19th century dinosaur exploration led to the discovery of many other important sites in the West.  The dozens of successful excavations at Dinosaur Ridge and at these other locations stocked many of the world’s museums and brought dinosaurs to public attention.

In 1937, during the construction of West Alameda Parkway, dinosaur tracks were discovered on the east side of Dinosaur Ridge in the 100-million year-old rocks of the Dakota Group, representing the Early Cretaceous Epoch. These tracks are those of Iguanodon-like plant-eating dinosaurs and ostrich-sized meat-eating dinosaurs.  Recent research has revealed that these tracks represent only a small part of the extensive track-bearing beds of the Dakota Group that can be traced from Boulder, Colorado to northern New Mexico.   Because these strata represent the shoreline sediments of an ancient seaway that was frequently trampled by dinosaurs, these beds have been called the “Dinosaur Freeway.”

Reading and writing and writing about reading are my passion. I've been keeping a journal since I was 14. I also write fiction and poetry. I published my first collection of short stories, "Radiant Darkness" in 2000. I followed that up with my first collection of poetry in 2001 called "Journey without a Map." In 2008, I published "Persephone's Echo" another collection of poetry. Since then I've also published Emotional Espionage, The Way The Story Ended, My Perfect Drug and Out There. I have my BA in English from The Ohio State University at Mansfield and my MA in English Lit from The University of North Carolina at Greensboro. I also have my Post BA Certificate in Women's Studies. I am the mother of two beautiful children. :-)
View all posts by carilynn27 →
This entry was posted in History, Travel and tagged Allosaurus, Anastasia Vaughn, Apatosaurus, Arthur Lakes, Colorado, Colorado School of Mines, Cretaceous Epoch, Dinasaur Ridge, Dinosaur Freeway, Golden, Jason Vaughn, Jurassic Period, Morrison, Sebastian Vaughn, Stegosaurus. Bookmark the permalink.