Jason has always loved Mountain Biking, so when he read that Colorado had a Mountain Biking Competition in the actual mountains, he decided we had to go.  So we hopped in the Suburban and drove down I-70 into the Rockies once again.  We got off the main highway and drove up a steep mountain and then we drove a pass between the mountains.  Once there, we parked at the fancy lodge and took the free gondola ride over to the villa and the slopes where the competition was taking place.

The Crankworx Colorado festival included Slopestyle, Big Air, Cross Country and Super Downhill competitions, with more events to be named as we approach the event. Originating at Whistler Blackcomb, Crankworx Mountain Bike Festivals feature the best freeride mountain bikers from around the world.  Winter Park Resort is known as the Mountain Bike Capital, USA and also home to over 50 miles of lift accessible mountain bike trails.

After watching the competition for awhile, the kids were getting restless, so we headed back down to all the tents.  There, we browsed before getting something to eat inside one of the buildings.  After we ate, the kids got to go through the maze for free and Ana had fun on the trampoline with ropes.  I watched the kids play on the playscape as Jason rented a mountain bike to try out the trails.  Once he was finished, we took the Gondola back to our car and drove home.  It was a long, but fun day. 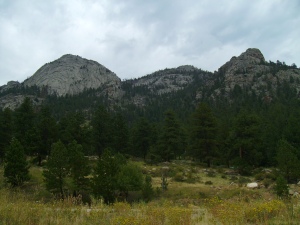 Sunday we decided to go to Estes Park.  The weather was cool and overcast.  We were unorganized and didn’t have a lot of money.  Even so, we decided to take the adventure. On the drive up I was not feeling well.  I was hungry and nauseated.   The kids grew restless and we couldn’t find a McDonalds in Boulder.  I think we passed one before I announced that I needed to eat.  In any case, none of us noticed a McDonalds in Boulder until the way back

Once in Estes Park we located a McDonalds and ate.  Then we explored the shopping center a bit.  Ana was running ahead and touching everything–including breakable things.  We hopped back in the Suburban and drove the short distance to the visitors center.  We collected a map and some info before heading out to the park.

We found out that when gold was discovered in Colorado in 1859, significant numbers of people began to make their way into the Estes Valley. Although most of the gold mining was south of here, one miner did wander into the area: Joel Estes, the man for whom the village was named.  Estes Park is perhaps most known for the Stanley Hotel.  It is where Stephen King stayed to write his novel The Shinning.

When we pulled in we saw the observatory.  We’d talked about going to their program, but it was too late at night for us, especially since it was two hours from home. 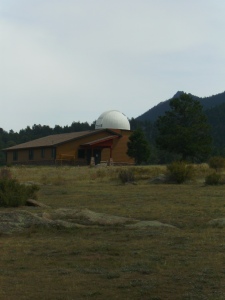 The kids played happily for a while.  Then it started to rain. We left before it poured down.  We weren’t ready to go home yet, so we drove to the entrance of Rocky Mountain National Park.   It cost money to get in, so we turned around and headed home.

Reading and writing and writing about reading are my passion. I've been keeping a journal since I was 14. I also write fiction and poetry. I published my first collection of short stories, "Radiant Darkness" in 2000. I followed that up with my first collection of poetry in 2001 called "Journey without a Map." In 2008, I published "Persephone's Echo" another collection of poetry. Since then I've also published Emotional Espionage, The Way The Story Ended, My Perfect Drug and Out There. I have my BA in English from The Ohio State University at Mansfield and my MA in English Lit from The University of North Carolina at Greensboro. I also have my Post BA Certificate in Women's Studies. I am the mother of two beautiful children. :-)
View all posts by carilynn27 →
This entry was posted in Travel and tagged Anastasia Vaughn, Boulder, Cari Lynn Vaughn, Colorado, Crankworx Festival, Estes Park, Jason Vaughn, Mounjtain Biking, Observatory, Rocky Mountain National Park, Sebastian Vaughn, Stanley Hotel, Stephen King, The Shinning, Winter Park. Bookmark the permalink.