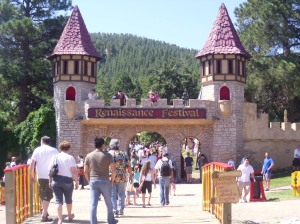 Sunday was pleasant though—a highlight to the entire summer perhaps.  Jason’s parents came over and left for the Renaissance Festival around 9:30am.  We drove about an hour and waited a bit in line before parking.  We took the shuttle bus to the front gates, which looked like that of a castle.  We waited for Jason’s parents who arrived like four shuttle buses later! 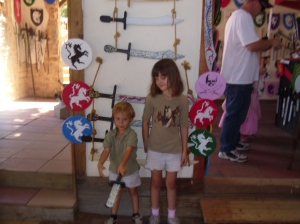 Inside we split up and started browsing the shops.  Period costumes, leather shoes, sky hammock seats, hats, masks and weapons were among the goods sold.  We went over to the food court to eat.  I had a pizza and a beer. The kids ate pizza and fruit while Jason got his turkey leg. 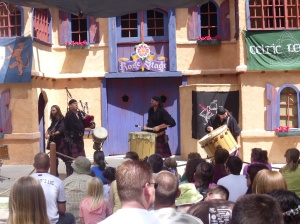 Then we watched Celtic Legacy at the Castle Rose Stage.  It was the sound of Bag Pipes that lured Jason to the stage.  I had to leave in the middle of the show to find my purse.  I’d left it at a picnic table where we’d been eating.  Luckily someone found it and turned it into Lost and Found at the info desk.  One beer and I go totally scatterbrained. Lol.

Anyway, we rode the giant King Swing.  It was strung up between two trees and pulled back by a huge old fashioned pulley.  The kids were terrified by the free fall, but it was a lot of fun.  Two men that I dubbed the Shoe Pirates pushed the swing to keep in going and had fun trying to take everyone’s shoes off as well.  Later, we rode the pirate ships swings which we controlled with ropes as well. 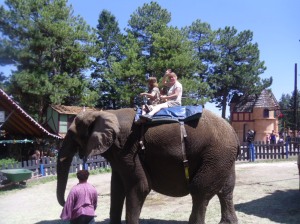 After that we took off for the Elephant Rides.  I remembered my first Elephant Ride as a kid at the circus and I knew the kids would love it.  Chris and Mike were over there on the side lines watching briefly before they moved on.  After the short ride we watched the belly dancers and a comedian fire juggler.  Earlier we’d seen a brother and sister juggling act as well.  After refilling out water, we looked at staffs that were hand carved and let the kids try on some cool hand crafted leather masks.

Later that afternoon we caught the raunchy Washing Well Wenches.  They were pretty funny.  Then we caught the tail end of the Cat show with Ocelots, Leopards and Tigers. 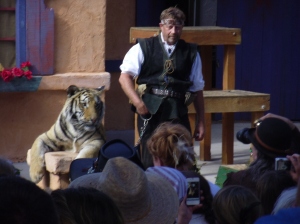 By 4:30pm-5pm we were all exhausted and ready to go home.  Though we were disappointed that we missed the jousting and some of the other attractions, we’d had a wonderful experience.  Jason vowed to be back in full costume next year. 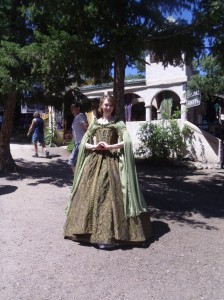 Reading and writing and writing about reading are my passion. I've been keeping a journal since I was 14. I also write fiction and poetry. I published my first collection of short stories, "Radiant Darkness" in 2000. I followed that up with my first collection of poetry in 2001 called "Journey without a Map." In 2008, I published "Persephone's Echo" another collection of poetry. Since then I've also published Emotional Espionage, The Way The Story Ended, My Perfect Drug and Out There. I have my BA in English from The Ohio State University at Mansfield and my MA in English Lit from The University of North Carolina at Greensboro. I also have my Post BA Certificate in Women's Studies. I am the mother of two beautiful children. :-)
View all posts by carilynn27 →
This entry was posted in Event and tagged Anastasia Vaughn, Belly Dancers, Cari Lynn Vaughn, Celtic Legacy, Christine Vaughn, Colorado, Costumes, Elephant Rides, Jason Vaughn, Jugglers, King Swing, Larkspur, Masks, Mike Vaughn, Pirate Swings, Renaissance Festival, Sebastian Vaughn, Swords, Washer Women, Wild Cats. Bookmark the permalink.