Warehouse 13 premiered on July 7, 2009 on the SyFy network.  Since I am not fortunate enough to get the channel, I had never seen the series before I got the DVDs from the library.  Interestingly, even though Science Fiction has drawn more male viewers in the past, women have really taken to the series.  They make up 50% of the viewership and I can see why.

Warehouse 13 is comforting to watch in a way.  The characters feel like friends and the premise right up my ally so to speak.  One critic said it was a cross between Indiana Jones and The X-Files with a little Moonlighting thrown in!  Nobody mentioned parallels to the TNT series The Librarian, but they are very similar.  Immediately I recognized Artie from the Star Trek the Next Generation episode “The Collector.”  I think he was also on Weeds.  Pete guest starred on Bones and actors from both Firefly and Alias occasionally drop by, which is also cool.

I liked the episodes with HG Wells.  Making her a women who’s loyalties are questionable was brilliant.  Also loved the psycho Alice from Alice through the Looking Glass.  Finding out the history of the Warehouses was fun too.  I constantly wonder what crazy plot twist they will come up with next! 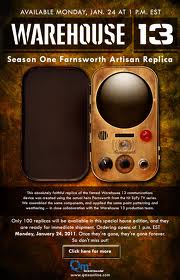 And let us not forget the whole Steampunk thing!  That is what led me to discover the SyFy series in the first place.  They use the Tesla Gun, which is a Victorian Stun Gun of sorts.  They use something called a Farnsworth, which is like a turn of the century Cell Phone, only better.  It cannot be traced.  Of course Artie has a computer that is decked out in Steampunk style as well. 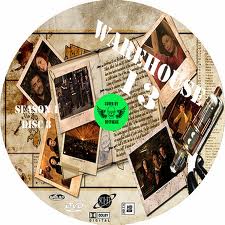 Anyway, I’ve watched Seasons 1 and 2 on DVD and I am awaiting season 3 on DVD.  Season 4 is scheduled to begin sometime this year.  Go Warehouse 13!

Reading and writing and writing about reading are my passion. I've been keeping a journal since I was 14. I also write fiction and poetry. I published my first collection of short stories, "Radiant Darkness" in 2000. I followed that up with my first collection of poetry in 2001 called "Journey without a Map." In 2008, I published "Persephone's Echo" another collection of poetry. Since then I've also published Emotional Espionage, The Way The Story Ended, My Perfect Drug and Out There. I have my BA in English from The Ohio State University at Mansfield and my MA in English Lit from The University of North Carolina at Greensboro. I also have my Post BA Certificate in Women's Studies. I am the mother of two beautiful children. :-)
View all posts by carilynn27 →
This entry was posted in Movies/TV. Bookmark the permalink.