It was at my birthday party that I was first introduced to Whitney Houston.   The year was 1986 I believe.  I had invited several friends from school to my party that June and Misty Hall showed up with her debut album in hand as a gift for me.

I didn’t own any tapes at age nine.   I did, however, own a few 45 records that had been passed down to me by my aunt.  Those records were all from 1980 or so and so my music collection was hopelessly limited and outdated.   It was nice to get something so new and cool.

Misty was into the latest and greatest music of the time.  I remember going down to her house on Whitney Avenue in Shelby and doing gymnastics in the yard as we listened to Michael Jackson’s Thriller.  I was never a huge fan of Michael Jackson, but I did enjoy hanging out with Misty and cartwheeling through her front yard.

Anyway, after my party was over I listened to Whitney Houston and I took to her immediately.  I loved to sing her songs and pretend I was a famous singer like her.

Later, I was thrilled to see my new favorite singer on a favorite show of mine—Silver Spoons.  Poindexter met Whitney on the show and she sang “Saving All My Love” to him.  As an awkward preteen hearing her sing that they were going to make love the whole night through made me embarrassed.   Yet, I still longed to have such a magical romantic moment, one worthy of singing such a beautiful song about.

For some reason “You Give Good Love” reminded me Indiana Jones.  There is a line “Take this heart of mine” which somehow got connected to The Temple of Doom.  I guess I both romanticized Indiana Jones as a good lover and connected the gruesome scenes of hearts being ripped out of chests with the line “Take this heart of mine.”  Weird the way things become associated in our minds. 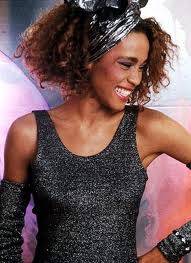 We’d just gotten cable not too long ago and so I was able to watch MTV.  Whitney’s “How Will I Know?” video was on heavy rotation.  Her video for “The Greatest Love of All” played a lot too.

In 1987 Whitney’s second album came out and I have my Mom get it for me.  I enjoyed watching the videos for “I Wanna Dance (With Somebody That Loves Me)” and “Where Do Broken Hearts Go?” as well as “Didn’t We Almost Have It All.”

For some reason I connected “Didn’t We Almost Have It All” to Stevie Burkhalter and. I am not sure why.  It is a beautiful and sad song in the same vein as her later hit “I Will Always Love You.”   I suppose I felt like I’d had something lost it, though I never really had it to begin with.   I really loved the line “One moment and The Soul Can Last Forever,”   To me it meant that the love I felt had touched my soul and comforted me even if the love was never reciprocated.

One of her little known songs was called “Miracle.”  It was about being pro-life and being thankful the miracle of life.  And although I still believe it is a woman’s right to choose, I also believe that each life is a miracle to be cherished.  I thought the song was moving in any case.

In 1990 she released a song called “All The Man I Need.”  I loved it then, but it really took on a whole new meaning in 1995 when I got with Jason.  Every time I heard the song from then on out, I though of him and the tender relationship that we had.  At the time, I truly felt blessed to have found someone to love so deeply.

I went back to the song “Saving All My Love” in 1994.  It was the song that I played for Paul the first time we were together.  Though the song was about having an affair with a married man, andPaul wasn’t married, I still felt it was appropriate.  The song was about forbidden love and the love between he and I was forbidden.  He was much older and I was still under age.  Though he was divorced, I still felt like he wasn’t mine to have.

And when that relationship failed I often played Whitney’s song “All At Once” from her first album and cried.  Although I found the song incredibly melancholy before, it took on a new meaning after that particular heartbreak.

Then The Bodyguard came out in 1993.  I saw the movie in the theater and got the soundtrack soon after.   Although “I Will Always Love You” isn’t a song I attached to a particular person, I do have fond memories of slow dancing to the song.  It never fails to move me whenever I hear it. 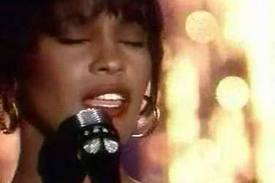 It was during the time that I was hospitalized in March that I particularly moved by the songs “Run To You” and “I Have Nothing.”  These two songs embodied the need I felt for love and comfort.  I longed for another person who could not be mine and I wondered why it was so wrong to long for him.  I wondered how people could write songs like those and then turn around and say that needing someone was wrong.   If it was wrong why did others express the same feeling that I felt?  It didn’t feel wrong.

When I started writing poetry, Whitney Houston’s songs were often inspiration, as were Madonna’s and Mariah Carey’s songs.  I often used lines from their songs in my own work as a tribute and a jumping off point.  But honestly, I was never really moved by anything Whitney Houston produced after The Bodyguard Soundtrack.

I know that young performers like Mariah Carey and Christina Aguilera named Whitney Houston as a huge influence.  She remained one of the most imitated singers even after her career took a dive.

Mariah Carey and Whitney Houston were often rumored to be dueling divas, but their quarrel was purely speculation.  They eventually did a duet together for the movie The Prince of Egypt.  “When You Believe” was a good song, but it didn’t have the emotional impact that either of them had produced for other songs.

I felt bad hearing about Whitney’s ups and downs.  She never really seemed to get back what she lost even though she kept putting out albums.  Hearing about her death saddened me of course.  Though she didn’t write her own songs, she sang them with great gusto and emotion.  She could make you dance and make you cry with her dramatic voice.   I know her songs made me feel a great deal and for that I am grateful. She will be missed.

Reading and writing and writing about reading are my passion. I've been keeping a journal since I was 14. I also write fiction and poetry. I published my first collection of short stories, "Radiant Darkness" in 2000. I followed that up with my first collection of poetry in 2001 called "Journey without a Map." In 2008, I published "Persephone's Echo" another collection of poetry. Since then I've also published Emotional Espionage, The Way The Story Ended, My Perfect Drug and Out There. I have my BA in English from The Ohio State University at Mansfield and my MA in English Lit from The University of North Carolina at Greensboro. I also have my Post BA Certificate in Women's Studies. I am the mother of two beautiful children. :-)
View all posts by carilynn27 →
This entry was posted in Literature/Pop Culture, Music and tagged All The Man I Need, Didn't We Almost Have It All?, Diva, Duet, How Will I Know?, I Have Nothing, I Wanna Dance (With Somebody That Loves Me), I Will Always Love You, Indiana Jones, Jason Vaughn, Mariah Carey, Mark-Paul Gosselaar, Miracle, Misty Hall, Paul Dennis, Run To You, Saving All My Love For You, SIlver Spoons, Steve Burkhalter, Take This Heart of Mine, The Bodyguard, The Greatest Love of All, The Prince of Egypt, The Temple of Doom, Tom Forest, When You Believe, Whitney Houston, You Give Good Love. Bookmark the permalink.