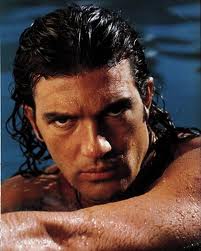 Lately I’ve been having some steamy dreams about Antonio Banderas and I don’t know why.  What is the draw I wonder?  I asked myself what comes to mind when I think of Antonio Banderas. I think of someone that is passionate, fiery, and sometimes violent.  Bisexual perhaps—at least open minded where that is concerned.He played Tom Hank’s partner in The Philadelphia Story after all.  Loving, vulnerable, hot headed, stubborn and arrogant at times even.  He follows his heart more than his mind.  He is easily hurt, but overcomes it. 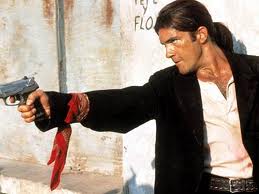 Now these may be traits belonging to his characters more than him, but from what little I know of his personal life, I think that most of his characters aren’t far off from him.   The situation and events are fictional, but I believe that each actor leaves a bit of themselves in the role.   Anyway, I have seen most of the movies he’d been in and I do know that he is married to actress Melanie Griffith. 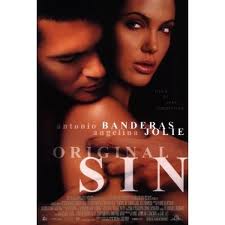 When I watched Original Sin something stuck me about him.   I realized his tie to Angelina Jolie’s character was probably the same sort of tie he felt to Melanie.  In the movie he was willing to forgive being robbed, betrayed and even poisoned because he couldn’t live without her.   Though he was angry, jealous and very hurt, he couldn’t bring himself to kill her, leave her or just forget about her.   Perhaps this sort of passion is what drove him to be with Melanie. 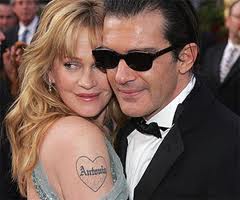 I mean she was married when they met, as we he, if I remember right.   If I remember correctly they left their respective spouses and quickly became lovers.  It wasn’t long before she got pregnant with their child.  They seem like an unlikely couple, but have been married for more than five years now I think. 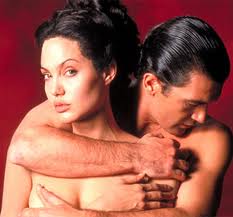 On the other end, I think Angelina Jolie wasn’t too far from her character either.  Trapped by her past and a prisoner of her heart….hurting those she loved most because she couldn’t help herself.   Love is passion for her.  Love is pain.   Love is being unable to breathe until you are by his or her side. 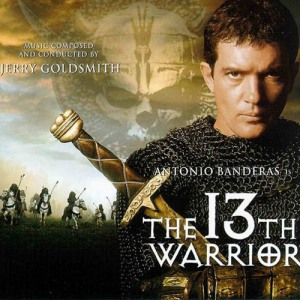 When I closed my eyes last night several things came to me.   Antonio’s movie The 13th Warrior and The Lord of the Rings The Two Towers. Both are influenced by Norse Legend and Scandinavia.  Yes, I think Antonio Banderas and I must have shared a past life somewhere in Scandinavia way back when…..

Reading and writing and writing about reading are my passion. I've been keeping a journal since I was 14. I also write fiction and poetry. I published my first collection of short stories, "Radiant Darkness" in 2000. I followed that up with my first collection of poetry in 2001 called "Journey without a Map." In 2008, I published "Persephone's Echo" another collection of poetry. Since then I've also published Emotional Espionage, The Way The Story Ended, My Perfect Drug and Out There. I have my BA in English from The Ohio State University at Mansfield and my MA in English Lit from The University of North Carolina at Greensboro. I also have my Post BA Certificate in Women's Studies. I am the mother of two beautiful children. :-)
View all posts by carilynn27 →
This entry was posted in Dreams, Movies/TV and tagged 13th Warrior, Acting, Angelina Jolie, Antonio Banderas, Betrayal, Dreams, Love, Melanie Griffith, Movies, Original Sin, Passion, Past Life, Poison, Scandinavia, Sexy, Steamy, Violent. Bookmark the permalink.

2 Responses to Antonio and Angelina