Hot Six Started It All

Hot Six Started It All

It was the summer of 2001 and I was waiting to get my car inspected.  I sat down in the cramped waiting room.  I’d forgotten to bring my own book, so I search from some magazine or something to keep me occupied.  That is when I spotted a paperback novel that someone had left behind.  It was blue and titled in bold letters Hot Six by Janet Evanovich.

I opened it up and started reading the Stephanie Plum adventure.  I cracked a smile several times and found myself drawn into the story immediately.  I was actually disappointed when the mechanic called me up and told me he was finished.  I thanked him, took my keys and left with the book in hand.  In the twenty or so minutes I’d been there no one had come to claim the book, so I decided it was mine.

That night I lay in bed, devouring the words on the page, dying to know who did it.  I even laughed out loud in a few places.  My then-husband Jason turned over to shoot me some dirty looks each time I laughed, but I couldn’t help it.  I’d never read anything like it before.  There was the familiar mixture of romance and mystery, but there was also the surprise element of humor as well.   What a novel idea!  It was so much fun to read.

I went back and got out her previous books after I finished Hot Six.  There was One For The Money, Two For The Dough, Three To Get Deadly, Four To Score and High Five.  After I’d consumed those, I eagerly awaited Seven Up.   I was definitely hooked.  Soon, I began looking for her books in the used book stores and started my collection.  Currently, I own books one through fourteen.  I got a little behind, but I plan on purchasing the fifteen through eighteen one of these days.

Little did I know my friend Sarah Kalowinski had discovered Stephanie Plum and gotten addicted like I had.  When I spotted a copy of To The Nines in her bathroom back in 2005, I had to say something about it.  She agreed the books were fun to read and called them “literary crack,” suggesting that they were not particularly substantial material, but highly addictive nonetheless.   I laughed at her description and have since used the phrase a number of times to describe the series to several people who’d not yet heard of it!

Every time I read one of the Stephanie Plum books I entertain the idea of becoming a bounty hunter myself.  After all, Stephanie is completely inept, but she still manages to get the job done.  Of course she has Morelli and Ranger to back her up.  I wouldn’t have two such gorgeous, strong and smart men looking after me if I went into the business.  Even still, it does look like a lot of fun.  To know that you have the strength and wits to get the bad guys must be quite satisfying at the end of the day. 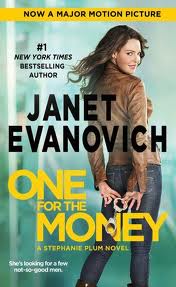 The urge to change professions also popped up when I finally got to watch the movie version of Evanovich’s One For The Money.   I’d imagined who’d play each of the crazy characters long before the movie was cast.  I never imagined Katherine Hegel as Stephanie, but I must admit she did a pretty job with the part.  I was thinking Vin Diesel or The Rock for Ranger, but the actor who played, Daniel Sunjata, him fit the bill well enough. Jason O’Mara wasn’t perfect as Morelli, but he wasn’t terrible either.  Debbie Reynolds wasn’t who I imagined as Grandma Mazur, but she was still enjoyable to watch.  I must admit I thought John Leguizamo would play Vinnie, but the Lost and Mad Men Alum Patrick Fischler nailed it.   Leguizamo was wonderful as Jimmy Alpha though.  He added a lot to the character.  Sherri Shepherd as Lulu was perfect.

I do hope that they make Two For The Dough into a movie eventually.  I’m not sure if they will, considering that One For The Money wasn’t as hugely successful as they’d hoped.  Even if they recast some of the roles, I’d still watch Two For The Dough—that is for sure.

I am also eagerly awaiting Notorious Nineteen to come out in November.  Meanwhile, I guess I will pick up Wicked Business: A Lizzie and Diesel novel by Jane Evanovich.  Her new magical mysteries are quite charming.

Reading and writing and writing about reading are my passion. I've been keeping a journal since I was 14. I also write fiction and poetry. I published my first collection of short stories, "Radiant Darkness" in 2000. I followed that up with my first collection of poetry in 2001 called "Journey without a Map." In 2008, I published "Persephone's Echo" another collection of poetry. Since then I've also published Emotional Espionage, The Way The Story Ended, My Perfect Drug and Out There. I have my BA in English from The Ohio State University at Mansfield and my MA in English Lit from The University of North Carolina at Greensboro. I also have my Post BA Certificate in Women's Studies. I am the mother of two beautiful children. :-)
View all posts by carilynn27 →
This entry was posted in Literature/Pop Culture, Movies/TV and tagged Comdey, Debbie Reynolds, Diesel, Grandma Mazur, Janet Evanovich, Jason O'Mara, Jimmy Alpha, John Legiuzamo, Katherine Hegel, Lizzie, Lost, Mad Men, Morelli, Movie, Mystery, Notorious Nineteen, One For The Money, Patrick Fischler, Ranger, Romance, Sarah Kalowinski, Stephanie Plum, To The Nines, Two For the Dough, Vinnie, Wicked Business. Bookmark the permalink.