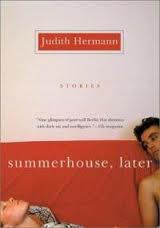 Are we drawn to literature that speaks to us directly?  Can we know someone through what they read?  Is literary biography accurate enough to even bother with?

I am listening to Summerhouse, Later by Judith Hermann.  I am doing so mostly because of curiosity, but also because in the past Ethan McMillan has had good tastes in literature.  I’ve enjoyed reading the authors he has written about or taught.  They have all enriched my life.  I guess I am also looking for clues.

The collections of short stories are existential in nature.  They are thoroughly modern in the character’s search for meaning and for love.  It is a bleak portrayal, but yet not without hope.  It is sad, but not pessimistic.  The stories are realistic, yet poetic.  They are beautiful like Wim Wender’s Wings of Desire.  I am happy to have discovered them.

“Sonja” in particular stirred something within me.  As I was drawn into the narration I began to see myself as Sonja and Ethan as the male narrator.  They character is an artist who has a girlfriend, but takes an interest in another woman who seems younger.  He gets pulled into her world.  It is a strange relationship that is subtle, sublime and somehow satisfying despite the lack of passion.  He is ambivalent toward Sonja, both annoyed and intrigued.  He wants to push her away at first, but doesn’t.  His girlfriend Verna accuses him of cheating, though he has not even touched Sonja.  When Verna is away all summer he spends time with Sonja.  The relationship is platonic.  The thought of having sex with her is somehow incestuous, yet he finds that he still loves her.  This creates a sense of fear, guilt and anger.  He allows Sonja into his heart anyway and into his bed.  They do not have sex, but there is an emotional intimacy between them.  The narrator panics and pushes Sonja away eventually.  He thought perhaps that he would be relieved, but he discovers that he misses her instead.  She moves away and he never sees her again.

At the end of the story I was left to wonder how Judith Hermann could have captured this very peculiar relationship so perfectly.  It felt as if Ethan had written the story, not an author who lived a world away from us both.  I think to myself that  Ethan would probably tell me that I am reaching here—reading too much into things as usual.  Maybe I am, but something inside me latches on to those words in “Sonja.”  It feels like the truth.  It is my truth if nothing else.

Anyway, happiness is the moment before, so says Judith Hermann.  Before what you ask?  Before the realization that you are happy, before the consciousness perhaps.  Ignorance is bliss right?  Sometimes.  Sometimes happiness comes at an unexpected moment.  We all pursue happiness, but true happiness is nearly always elusive and just out of grasp.  We pursue an intellectual ideal rather than our heart’s desire.  Happiness cannot be thought up or created as an ideal.  No, happiness is in the small stuff, the Zen like state of mindfulness.  The details are where it is at because the big picture is full of struggle and suffering.  So, while you ache and accept your place in life, there are moments of bliss.  Once we become aware of that bliss, then the fear sets in.  We become attached to our happiness and try too hard to maintain that high.  Life isn’t one big high though.  It is a series of ups and a down…the secret is to let go and go wherever it takes you.  The joy found in the moment can never be permanent.  The only security you have is the life will surely present you with another up.  If nothing ever stays the same then you can’t possibly depressed all the time.  It is probably that rational realization that kept me sane the past few years.  After a long dark night, I’ve found my way to the dawn.  At last I feel good about things.

I was walking down the street with Ana, watching her explore everything when happiness hit me.  In that simple moment I found joy.  I smiled and felt warm inside despite the cool air.  I enjoyed Ana fully, but also found my thoughts wandering to Summerhouse Later, Judith Hermann and the nature of Happiness.

Reading and writing and writing about reading are my passion. I've been keeping a journal since I was 14. I also write fiction and poetry. I published my first collection of short stories, "Radiant Darkness" in 2000. I followed that up with my first collection of poetry in 2001 called "Journey without a Map." In 2008, I published "Persephone's Echo" another collection of poetry. Since then I've also published Emotional Espionage, The Way The Story Ended, My Perfect Drug and Out There. I have my BA in English from The Ohio State University at Mansfield and my MA in English Lit from The University of North Carolina at Greensboro. I also have my Post BA Certificate in Women's Studies. I am the mother of two beautiful children. :-)
View all posts by carilynn27 →
This entry was posted in Event, Literature/Pop Culture and tagged Emotinal Affairs, Ethan McMillan, German Authors, Happiness, Happiness is the moment before, Judith Hermann, Literary Biography, Sonja, Summerhouse Later, Verna, Wim Wenders, Wings of Desire. Bookmark the permalink.