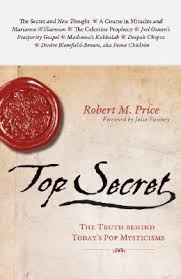 I want to know to know why modern academics feel that anything remotely positive is naïve or flaky?  This week I read the book Top Secret by Robert M Price.  I knew that I’d probably come away charged with frustration and anger and I did. Price attacks all the New Age/New Thought texts in recent history.  He explains the basic idea behind such favorites as the Oprah back The Secret by Rhonda Byrne as well as Eckert Tolle’s The Power of Now.  He also examines Wayne Dyer, Shakti Gawain, Deepak Chopra, Pema Chodron, Helen Schumann, Marianne Williamson, Neale Donald Walshe, James Redfield, Stephen A Hoellar and Timothy Freke (Ala Carl Jung), Michael Berg and Joel Olsteen.  He is an equal opportunity Bigot.  New Age, Gnosticism, Christianity, Judaism, Hinduism, Buddhism are all equally discredited.  I was surprised; however, what I was criticizing him for—his rhetoric.

I could argue in favor of New Thought or one particular religion, but I don’t think I will at the moment.

Price’s book is filled with wit and sarcasm.  He claims that he used humor as a way to lighten the mood—that he felt it was important not to take the subject matter or himself too seriously.  The effect was that it weakens his argument. His comments are passive-aggressive and belittling.  He comes off as an arrogant, pompous jackass and that irritates the hell out of me! Once more, other readers will jump on his bandwagon and continue the cycle of cynicism.  His book is dark and cynical, which is oppressive in the end.

I have nothing against humor.  I use it in my own writing now and again. It can relieve the tension and can be fun.  However, humor can also be used inappropriately to deflect weak arguments or deflect attention away from weak arguments I should say.  Straightforward parodies can illustrate political points.  They seek to entertain first and educate second.  Price’s book seeks to educate and then entertain.  Since the entertainment value is next to nhil, it simply calls attention to itself.

Price sets up his subject and knocks it down.  I will give him credit for having covered each topic thoroughly though. He is obviously well educated and intelligent.  That does not, however, make him right.  He points toward philosophy and seems to put more stock in what they say then what anyone else does.  He throws in some bible quotes as well.

It becomes obvious among all the explanations, that Price views Orthodox Christianity as correct.  He doesn’t spell it out or devote much time to his particular beliefs, but he is very much a right-wing Christian conservative.  Conservatives have been backlashing for sometime now against nontraditional methods of practice and nontraditional belief systems.  This book is one of the many aimed to dismantle the current effort to demystify Christ and Christianity. It is an effort to bring followers back to the fold—to shepherd lost sheep so to speak.

Some people do fall into traps and end up victims of some bizarre cult.  However, many have taken intelligently taken up the cause of empowering themselves. The church has victimized for centuries.  It has hidden information and launched inquisitions in order to quell the fire of freedom.  Price appears to be advocating surrendering to the biblical canon under no uncertain terms.  Again, my God or no god.

There needs to be a middle ground.  I do agree that New Age and Self-Improvement books are watered down versions of other texts and genres.  They may not be philosophic or even that realistic at times.  Still, I can’t concede that they are unholy or evil.  They fulfill a need, a deep spiritual hunger in the American Public.  Christianity in its canonical and conservative form is failing to engage its followers.  These books are not templates from the devil to do evil.  They are not all together worthless and devoid of any substance either.  They try to empower people by giving them the tools to find spirituality on their own. Some of these tools work better than others.  Some people insist on using the wrong too for the job.  Still, others do not exercise critical reading skills or common sense for such matters.

It is important to keep an open mind.  Disregarding and outright attacking a genre is tragically common and it shows a severe lack of compassion and tolerance on the author’s part.  Books attacking other books are depressing to read and serve no real purpose other than to preach to the choir so to speak.  If he wanted to convince me of something he’d do better to put forth ideas he was for. I’ve found that arguments in favor of something are often a great deal stronger than against.  Positive positions get positive results.  Be FOR Christianity, not against all other religions. Be FOR tradition, not against not anything new. Convince me of how wonderful your position is, not how horrible mine is.  Don’t guilt me into conforming.  Don’t manipulate the facts.

In the book True Enough by Farhad Manjoo, facts are shown to be fluid.  We are living in a post-fact society.  Opinions and beliefs have overtaken logic and facts in a cultural coup-d-tete.  Price would argue that the New Thought authors are at fault for this.  But I would argue that it is people like Price that propagate or propel this fragmentation.  Being ignorant or intolerant of others leads to closed minds.  Being open is considering all sides and evaluating the evidence.  Being open does not mean believing everything you hear or read.  Despite the pitfalls of a free press, I believe it is important to have options.  I shouldn’t have to conform to the world view that Price espouses.  I have a choice, be it right or wrong.   It is up to me to make my own mistakes.  I don’t have to worry about the church persecuting me because what I choose to believe.  I’m not being forced to pretend to agree with beliefs that I am uncomfortable with.

The only problem with this freedom is that people lack the education and the tools to make responsible decisions.  Technology has made us lazy.  Schools have failed to educate their students.  Well meaning self-esteem programs have created a society of narcissists. No one wants to be wrong, but everyone should be humble enough to admit their mistakes.  Instead of taking responsibility, we shift blame.  Instead of dealing with problems, we tend to seek escape instead.

America’s tendency to escape is the subject of another book I recently read called Against Happiness.  Against Happiness is by Eric G Wilson.  I resisted reading it at first, thinking it would depress me or somehow anger me.  Instead, it was thought provoking.  Wilson isn’t really against happiness all together.  He is against the reckless pursuit of pleasure at the expense of learning the lessons that pain can bring.  America is a nation of consumers who pop pills or run up credit card debt to avoid any sense of discomfort.  Happiness, Wilson feels, should be hard or earned.  I agree with him on that point.  Wilson also spends time attacking the worst offenders or the culprits behind this escapist trend.  To his credit, he is equally unhappy with “smarmy, warmongering conservatives” and “passive-aggressive pacifist liberals.”  I’m not sure what Wilson’s ideal political stance is if now one can cope correctly.

Overall, Wilson was well-read and often waxed poetically.  While had had many valid points, after awhile it was a bit of a downer to read.  I cultivate melancholy moods sometimes, but there is a fine line between artistic ennui and depression. It is okay to indulge in an occasional blue or even black mood.  However, if those moods fluctuate too wildly or linger too long, then it is time to get some help.  I believe Wilson is a bit too willing to prolong those pessimistic preoccupations.

Again, both Wilson and Price are academics.  Granted, they probably would view each other with disdain and distrust, but pessimism is something they share.  In fact, many of the academic-oriented books I’ve read are full of sarcasm, cynicism and even mockery toward anyone the least bit optimistic.  It is a stereotype scholars feel they have to conform to, I believe.  Just as scientists have a reputation for being atheists or agnostic at best, scholars have a reputation for being arrogant and always skeptical.  The scientific method and the critical mind set do not require one to be world-weary. So why the Weltschmerz.

Reading and writing and writing about reading are my passion. I've been keeping a journal since I was 14. I also write fiction and poetry. I published my first collection of short stories, "Radiant Darkness" in 2000. I followed that up with my first collection of poetry in 2001 called "Journey without a Map." In 2008, I published "Persephone's Echo" another collection of poetry. Since then I've also published Emotional Espionage, The Way The Story Ended, My Perfect Drug and Out There. I have my BA in English from The Ohio State University at Mansfield and my MA in English Lit from The University of North Carolina at Greensboro. I also have my Post BA Certificate in Women's Studies. I am the mother of two beautiful children. :-)
View all posts by carilynn27 →
This entry was posted in Literature/Pop Culture, Pedagogy, Religion, Science/Philosophy, Writing and tagged Academics, Agnostic, Atheist, Attitude, backlash, Buddhism, Carl Jung, Christ, conservative, Deepak Chopra, Eckert Tolle, Eric G Wilson, Farhad Manjoo, Freedom of Speech, Freedom of the Press, God, Helen Schumann, Hinduism, James Redfield, Jesus, Joel Olsteen, Judaism Against Happiness, liberal, Marriane Williamson, Michael Burg, Neale Donald Walshe, New Age, New Thought, Oprah, Orthodox Christianity, Pema Chodron, Pessimism, Post-fact, Rhonda Byrne, right wing, Robert M Price, Shakit Gawain, Stephen A Hoeller, The Power of Now, The Secret, Timothy Freke, Top Secret, True Enough, Wayne Dyer, Weltschmerz. Bookmark the permalink.