Everyone should read Thomas Paine.  He addresses the topics of Religion and Freedom in a clear and no-nonsense manor.  His common sense and rational approach are uncommon in this era of unreason.  If more people read Paine then perhaps the current climate of Christian Conservatism wouldn’t be so strong.  Truly, the extreme Christian Fundamentalists have created an anti-intellectual society.  Not only are Americans less free, but they are less intellectual as well.

According to Jacoby, the consensus of Christian culture is an exception.  Europe and much of the developed world is driven by Human Secularism.  That isn’t to say that the world isn’t less spiritual or less religious than America. It simply means that the separation of church and state is being destroyed here.  We have been leaning toward a theocracy since Bush was elected in 2000.  Jacoby also addresses the trend of Junk Thought or Junk Science.  Popular articles and books often promote ideas that are unscientific, unsound and down right unreasonable.  It is akin to a bunch of people creating a flat world movement in the age of the round world.

Sadly, America’s refusal to be reasonable not only affects adults, but future generations to come.  All of this opinion-based research and its results have created a failing school system.  Literacy has dropped.  Even with people constantly emailing, texting and talking, we are losing touch with reality.  People in America have lost their ability to think and read critically. 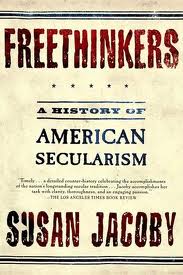 In my own experience, the school systems are so far behind, that it is impossible to teach incoming freshman this key piece of their education.  They lack the basic grammar and comprehension skills.  Until those issues are addressed, they will not and cannot learn critical analysis.

Paine argued that citizens should question tyranny and theology, as theology has long been a tool of tyranny.  Morality need not be solely based on one’s religion, but on our common needs as human beings.

Reading and writing and writing about reading are my passion. I've been keeping a journal since I was 14. I also write fiction and poetry. I published my first collection of short stories, "Radiant Darkness" in 2000. I followed that up with my first collection of poetry in 2001 called "Journey without a Map." In 2008, I published "Persephone's Echo" another collection of poetry. Since then I've also published Emotional Espionage, The Way The Story Ended, My Perfect Drug and Out There. I have my BA in English from The Ohio State University at Mansfield and my MA in English Lit from The University of North Carolina at Greensboro. I also have my Post BA Certificate in Women's Studies. I am the mother of two beautiful children. :-)
View all posts by carilynn27 →
This entry was posted in Politics/Economics, Religion, Science/Philosophy and tagged Christianity, Common Sense, Freethinkers, Human Secularism, Junk Science, Junk Thought, Religion, Susan Jacoby, The Age of Reason, The American Age of Unreason, The Rights of Man, theology, Thomas Paine, tyranny. Bookmark the permalink.