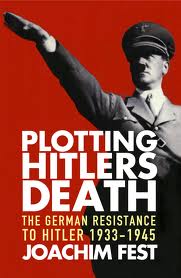 Joachim Fest’s book Plotting Hitler’s Death is an ambitious book that attempts to describe the German Resistance to Hitler.  This book expresses how the men who led the German Resistance to Hitler gained a moral victory even though the failed to actually assassinate Hitler.  The book begins with the most famous attempt on Hitler’s life, July 20, 1944 and then retraces what led up to it, beginning with the time Hitler was gaining power. The book does not have much about the resistance to Hitler prior to him being elected Chancellor because there wasn’t much protest or press surrounding him until much later.  He was jailed before his time as Chancellor, but even that was not enough to stop him from carrying out his grand plans.  It wasn’t until after WWII that the protests against Hitler and the assignation attempts would be officially called a Resistance.

The basic theme of the book was that the attempt was “a plot that failed but achieved moral victory.”  In other words, these men can be commended for their admirable efforts even if it changed very little in the grand scheme of things.  Fest felt that even if they had succeeded in killing Hitler, that it would have done very little good once the Nazi’s were in power.  Fest even went as far as to say that these men felt a deep moral and spiritual need to get rid of Hitler even when it appeared to be too late.

Fest jumps from different people and events as he answers questions such as who were the conspirators and why did they resist Hitler?  The people who resisted Hitler came from a number of places, but there was only one group that had enough organization or power to pose much of a threat.—the career military men.  The resistance did, however, include lawyers, students, union leaders, field marshals, politicians, journalists and even book binders.  There were men such as Axel von dem Bussche, who was enthusiastic for Hitler until he saw the mass murder of the Jews in October of 1942.  Then he, like others, was eager to join the resistance once they saw what was really happening.

The essence of the resistance before the war was minimal.  There were a few early conspirators who did try to become allies with England, but due to a lack of communication nothing was really ever accomplished. The conspirators were discouraged by their lack of support and ended up sitting back and waiting for the right time to act.

On December 26, 1943, Col. Claus Schenk von Stauffenberg made his first attempt on Hitler’s life at the Wolf’s Lair, which was Hitler’s headquarters near Rastenberg in East Prussia.  The meeting was, unfortunately, canceled and the next meeting saw Stauffenberg unable to complete his mission.  Finally, on July 20, 1944 Stauffenberg went to a meeting with Hitler and the other Army Generals.  There, he successfully planted a bomb that was meant to kill Hitler and the other leaders as well.  The bomb did go off after Stauffenberg left the building, but no one, including Hitler, was killed.

It was Fest’s conclusion that these conspirators lacked organization and relied too much on their chain of command.  It was their inability to act swiftly and precisely that led them to fail.  Some of conspirators committed suicide once they heard that Hitler was alive, not wishing to face his wrath.   In he was indeed angry.  More than 7,000 people were arrested after the failed attempt. Most were involved in the plot, but some were not.  Nearly 5,000 people were executed over the years that followed.  Some of the men that were implicated were Stauffenberg, Rommel, Schlabrendorff and Hellendorf.

The overall style of the book was very confusing.  Fest wrote it in chronological order, but the chapters are divided into the various groups and movements. While Fest focused on the plot to kill Hitler, there was a lot of excess material on Hitler’s Rise to power that didn’t really need to be there.  Fest claimed in The New York Times Review of Books that is him aim was, “not so much to convey new information as to recount an old story in the light of the latest research.”  The book was indeed well researched.  There was a great many names and overwhelming amount of facts.  Unfortunately, there were some things that Fest assumed that the reader would already know and so it made the overall picture a bit fuzzy.  Reading the summery in Spielbvogel’s book helped put it all into perspective.  The information was basically the same, but much shorter and clearer.

Joachim Fest compiled a lot of interesting information in this book, but just like the conspirators, he lacked clever organization.  Fest did accomplish his goal in shedding new light on an old story, so it was worth reading. 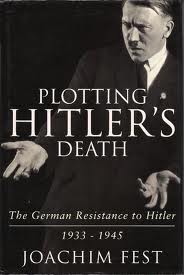 Reading and writing and writing about reading are my passion. I've been keeping a journal since I was 14. I also write fiction and poetry. I published my first collection of short stories, "Radiant Darkness" in 2000. I followed that up with my first collection of poetry in 2001 called "Journey without a Map." In 2008, I published "Persephone's Echo" another collection of poetry. Since then I've also published Emotional Espionage, The Way The Story Ended, My Perfect Drug and Out There. I have my BA in English from The Ohio State University at Mansfield and my MA in English Lit from The University of North Carolina at Greensboro. I also have my Post BA Certificate in Women's Studies. I am the mother of two beautiful children. :-)
View all posts by carilynn27 →
This entry was posted in History and tagged 1933, Bomb, Cari Gilkison, Cari Lynn Vaughn, December 26th 1943, Dominic, Fall 1998, History of Germany in the 20th Century, Joachim Fest, July 20th 1944, Meeting of Generals, Operation Valkyrie History 518, OSU, Plotting Hitler's Death, Stauffenberg, The German Resistance, The Plot to Kill Hitler, The Wolf's Lair. Bookmark the permalink.