The Nazi’s Place in German History

The Nazi’s Place in German History 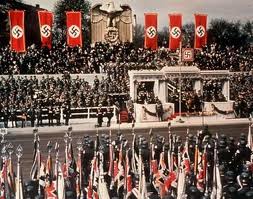 The place of the Nazi’s in German history is important, but it should not overshadow the rest of its long and diverse history.  The Nazi’s were not the first group of people to commit horrible crimes against humanity, nor were they the first products of so-called “National Character.”  The Nazi’s followed ideologies that had been around long before they ever organized, including the long tradition of Anti-Semitism that was all over Europe.  The Nazi’s gained so much attention only due to a unique set of circumstances that occurred through a long chain of events.  It is important to understand the events leading up and following the rise of the Nazi’s to understand their place in history.

First you have to understand that that the Nazi’s were not a unique phenomenon in history.  There have been man acts of terrorism and inhumanity throughout history.  For example, the crusades, the Spanish Inquisition, the wiping out of the Native Americans here in the USA and Slavery just to name a few.  In all of these cases, the perpetrators believed and led others to believe that their victims were not human.  They saw them as animals or others and that dehumanization allowed them to commit unimaginable atrocities.  The Nazis were merely part of many such perpetrators.

The Nazis began to form with the rise of modern Germany.  Before Germany had been part of The Holy Roman Empire and did not have a separate identity from Austria and the surrounding areas.  From Otto Van Bismarck to the Kaiser, Germany’s leaders have always sought to expand Germany’s borders.  Germany really did not appear to be more or less aggressive than other European countries at first.  Germany has always occupied much of Central Europe as the Holy Roman Empire—including what is now Austria, Poland, Northern Italy and the Czech Republic.  The Holy Roman Empire failed to centralize their power and thus eventually lost power.  Germany, which was called Prussia, continued battling for dominance against the Austrians.

Then the Industrial Revolution swept the world and almost all the aristocracies were overthrown, including Germany’s.  Most of Europe and even America went through Revolutions.  Germany teetered on the brink of a revolution, but did not have one until the end of World War I.  World War I had been brought on by the Kaiser’s desire to push out Germany’s boundaries once again.  Although it wasn’t completely Germany’s fault, they were blamed for the outbreak of “The Great War.”  This left Germans bitter and angry over being blamed and for the unfair Treaty of Versailles.  The treaty stripped them of a great deal of land—including Austria, Poland and the Czech Republic.  The treaty then took away their army and left them occupied by France, England and America.  The Weimar Republic that was formed was never stable at all.  Perhaps its fatal flaw was the placement of Article 48 in their constitution.  Then there was the fact that all the good leaders had been killed in the war and those who weren’t were soon assassinated. This left weak and ineffective leaders to blunder their way form the end of WWII to the rise of Hitler in 1933.

The Nazi’s existed before Hitler became their leader.  They had begun their life as the Socialist Workers Party.  Hitler was sent to spy on this particular party.  The goal was to pick a party to rise up and overthrow the Republic.  It was hoped that Germany could either return to an aristocracy or a dictatorship.  However, what the people had in mind who hired Hitler was not the same thing that Hitler had in mind.  Hitler wanted to sieze the power for himself.  With the Great Depression, the Germans became desperate for some sort of change.  The new Nazi party, now headed by the charismatic Hitler, promised a better place and return to the old ways.  It was during the bottom of this Great Depression that the vote for the Nazi’s jumped up dramatically.  In times of a bad economy there is usually a shift in it from the current leaders to someone else—often to the political left.  A lot of Germans voted fro this party because of the Nationalism they preached as well as the promise of a better economy.   There was a small handful of people that were very strongly Anti-Semitic, but they did not hold the public opinion for all of Germany.  The Nazi’s gained popularity basically through a good sense of timing and propaganda.  Most Germans were innocent bystanders and many that would have resisted were afraid of rebelling once they realized the truth.

Hitler was elected Chancellor in 1933 and was supposed to be a puppet for the government.  Instead of doing what they wanted, he quickly swept all major opposition out of the way.  In a very short time, the Germans found themselves taken over—maybe even Colonized—by the Nazi party.  Then Hitler plunged Germany and, inevitably, the world into WWII.  The Second World War is what drew attention to the Nazis.  With the use of new technologies such as the tank and air raids, this war was fought on a much larger scale.  Radio, movies and television dramatically effected how the world saw this war.  The news footage at the movies and photographs taken at the concentration camps were new, although human cruelty was not.  It was because of this new technology and the larger scale and the publicity that the Nazi’s were considered the manifestation of evil in the modern world.  The propaganda that reached the USA alone left many with long lasting and bitter memories.

It is important to remember that the Nazi’s were only one of many political parties to come out of Germany.  Throughout the twentieth century there have been democrats, communists, fascists and everyone in between (including the peace loving Greens.)  There were people like Fredrick the Great, Bismarck, The Kaiser and Hitler—but there have also been people who sought peaceful solutions like William Leibknect.  Nazism is not representative of “the German character.”  The Nazi’s can’t be a product of Nazi character because they are merely part of a diverse nation.

Even as WWII drew to its close, the world turned its attention from the Nazi’s to a new enemy—Russia.  In 1949, the war ended with Germany defeated.  America, France, England and Russia occupied Germany after the war and made sure Germany went through a process of denazification.  The Nuremberg Trials in Germany and other countries in Europe were a part of this process.  It wasn’t long after all these details were taken care of that the cold war set in.  It was that Communism, not Nazism, became the ting to fight against.  West Germany became a necessary friend and supporter in this war against Communism.  East Germany, however, sided with Russia and the country became torn once again.

This change in attitude toward Germany demonstrates the mercurial nature of war and politics throughout history.  Swift currents carry Germany and the world onward.  Germany has remained peaceful since the end of WWII, perhaps dispelling the idea that the German people are someone how more aggressive than the other people of the world.  In 1980 Communism disintegrated in East Germany and the dream of reunification was realized.  A complete Germany grows and thrives in the world today.  Germany is now becoming known for their beer, music and cars more than that terrible chapter of their history that contained the Nazis.

While the rise of the Nazis seems inevitable given the chain of events, it is not something that is uniquely German in essence.  The German also produced Einstein, Goethe, Beethoven, Mann and many others who were know for contributing great things to the world.  The Nazis are a dark period in a pretty normal society.  The Germans are merely an example of the extremes of civilization that are all around us.

Reading and writing and writing about reading are my passion. I've been keeping a journal since I was 14. I also write fiction and poetry. I published my first collection of short stories, "Radiant Darkness" in 2000. I followed that up with my first collection of poetry in 2001 called "Journey without a Map." In 2008, I published "Persephone's Echo" another collection of poetry. Since then I've also published Emotional Espionage, The Way The Story Ended, My Perfect Drug and Out There. I have my BA in English from The Ohio State University at Mansfield and my MA in English Lit from The University of North Carolina at Greensboro. I also have my Post BA Certificate in Women's Studies. I am the mother of two beautiful children. :-)
View all posts by carilynn27 →
This entry was posted in History and tagged Antisemitism, Austria, Beethoven, Cari Gilkison, Cari Lynn Vaughn, Civilization, Communism, Concentration Camps, Czech Republic, Democracy, Dictatorship, Dominic, Einstein, England, France, Genocide, Germany, Goethe, History 518, History of Germany in the 20th Century, Hitler, Holocaust, Kaiser, Mann, Nazis, OSU, Otto Von Bismarck, Poland, Political Parties, Propaganda, Prussia, Russia, society, The Holy Roman Empire, USA, WWI, WWII. Bookmark the permalink.