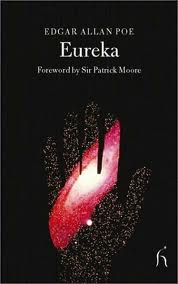 Edgar Allan Poe, though considered a classical writer, is often seen strictly as a writer of mystery, horror and Gothic.  However, his writing also shows a deeper, more metaphysical side as well.  “Elenora” and “The Cask of Amontillado” are two short stories that showcase his deeper, more spiritual leanings.  Then there is his nonfiction book Eureka, which is the most metaphysical of all.

Poe thought of God as a poet and the poetry a reflection of the divine.  Richard Wilber explains: “The universe, therefore, was an artistic creation composed by God.  Now if the universe was a poem, it follows that one proper response to its aesthetic, and that God’s creatures are attuned to Him in proportions as their imaginations are ravished by the harmony of his creation.  Not to worship beauty, not to regard poetic knowledge as divine, would be to turn one’s back on God and fall from Grace.” (257-258) With this quote in mind, reading one of Poe’s stories takes on new and profound meaning.

Poe points out the importance of beauty saying, “The thirst for [for the beautiful] belongs to the immortality of man.  It is at once a consequence and indication of his perennial existence.  It is the desire of the moth for the star.  It is no mere appreciate of the beauty before us, but a wild effort to reach the beauty above.” (237-247)

“The Cask of Amontillado” is an example of the struggle between physical world and spiritual growth.  Richard Wilber believes that Poe saw the soul as at war with the mundane physical world.  Montresor is hurt by Fortunato’s unnamed betrayals. Instead of finding a way to forgive him, which would have been the divine thing to do, Montresor punishes him.  The misery of being earthbound drove him to seek an earthly solution to his sorrow.  The character of Montresor is not unlike Poe’s own suffering soul.  Poe imagined life to be perfect and sweet, but was quickly introduced to the pain of loss and the horrors of reality.  Montresor’s compromised and flawed human soul led him to this awful solution and his internal justification for his crimes.

Poe often drowned his miseries in drugs and alcohol.  Clearly his soul was too sensitive for the cold, hard life he faced.  This search for some relief, some piece of heaven, was perhaps most clear in his story “Elenora.”  Poe’s soft, romantic and beautiful imaginings are not as well known as his ventures into the dark corners of the human psyche.  Still, they are worth reading.

Many critics, including D.H. Lawrence agree that Poe experienced some sort of extreme ecstasy that could only be described as cosmic, metaphysical or divine in nature.  Poe, more than anything, wanted to feel whole and he knew both nature and romance could provide that sense of completion he so sought.  Take Poe’s story “Elenora” for example.  The valley of multi-colored grass in Elenora is reminiscent of some long forgotten utopia.  It is a divine place that he wishes to visit.  D.H. Lawrence observes that the characters in Poe’s story, “Looked down at their own image in the river in silence and drew the God Eros from that wave, out of their own self-consciousness, that is.” (29)  Poe suggests that love is not beautiful not just because it is physical or romantic, but because it is spiritual and divine in nature.

It is not just the world that is divine and perfect, but Elenora herself.  Charles L. Stanford observers, “His [Poe’s] deification of women gave him access to life beyond the grave.” Poe put the women in his stories “Elenora,” “Legia” and “Morella” up on a pedestal and worshiped them as goddesses.  They are unobtainable in their eternal glory, as if their heavenly love.  These women represent the joy and happiness that he could never seem to grasp here on earth.  As Stanford points out, “The dream of restoration to paradise is conveyed in the many images of his dead heroines, forever isolated out of the world with him in great valley of multi-colored grass.”

Many of Poe’s stories draw from his actual life.  “Elenora” is said to be the embodiment of his beloved child-wife Virginia.  In May of 1836, Poe married his fourteen year old cousin Virginia Clemm.  She passed away just a year later in 1847.  Through such stories as “Elenora” he is able to immortalize her and keep her beautiful and young.  The story is a mixture of the sorrow of his life and the dream of keeping that love alive forever.  Wilber explains, “For all these reasons, it’s not easy for a poet to detach his soul from earthly things and regain his lost imaginative power to commune with a supernatural beauty, which is symbolized by Poe in the shadowy angelic figures of Legia, Helen, Lenore and Elenora.” (259)

Eureka, a nonfiction book though it was called a prose-poem, perhaps is the best example of his metaphysical leanings.  In his book he attempts to explain the universe.  He says in the introduction, “I design to speak of the Physical, Metaphysical and Mathematical – of the Material and Spiritual Universe: of its Essence, its Origin, its Creation, its Present Condition and its Destiny” He continues to explain that space and duration are one as matter and spirit are one.  We were at one with God at one time and still long for that sense of unity, thus we continuous feel alone and lacking in the world.  It was more science fiction than science at the time, but Poe did manage to predict the discovery of blackholes and expressed ideas that echo the modern big bang theory.  Poe certainly seemed tied into to something larger than himself when he wrote Eureka and it shows.

Poe, thinking of God as a poet, expressed a great deal of spirituality not only in the act of writing itself, but in the pictures he painted with those inspired words. James Gragan explains in beautifully when he says, “But Poe knew only love, intense vibrations and heightened consciousness.  Drugs, women and self destruction were all ways he tried to reach that prismatic ecstasy of heightened consciousness and sense of love, of flow.  The human soul inside him was beside itself, but it was not lost.” (334)

Carlson, Eric. The Recognition of Edgar Allan Poe.  The University of Michigan,

Reading and writing and writing about reading are my passion. I've been keeping a journal since I was 14. I also write fiction and poetry. I published my first collection of short stories, "Radiant Darkness" in 2000. I followed that up with my first collection of poetry in 2001 called "Journey without a Map." In 2008, I published "Persephone's Echo" another collection of poetry. Since then I've also published Emotional Espionage, The Way The Story Ended, My Perfect Drug and Out There. I have my BA in English from The Ohio State University at Mansfield and my MA in English Lit from The University of North Carolina at Greensboro. I also have my Post BA Certificate in Women's Studies. I am the mother of two beautiful children. :-)
View all posts by carilynn27 →
This entry was posted in Literature/Pop Culture, Psychology, Science/Philosophy and tagged 1995, Cari Gilkison, Charles E May, Consciousness, Critical Writing, D.H. Lawrence, Drinking, Drugs, Ecstasy, Edgar Allan Poe, Elenora, Eric Carlson, Eureka, Fortunato, God, Harold Bloom, Helena, Jane Rogers, Legia, Literary Criticism of Edgar Allan Poe, Montresor, OSU, physical world, Richard Wilber, Robert Hough, spiritual growth, The Cask of Amontillado, The Recognition of Edgar Allan Poe, The Tell-Tale Heart and Other Stories, Vincent Buranelli, Virginia, Women. Bookmark the permalink.