Garbage Is Not Pure Rubbish

The song was not quite like anything I’d heard at the time.  It was an infusion of Rock, Alternative, Pop, Electronic and Dance.  The lyrics were dark, yet it wasn’t accompanied by the usual screaming and cacophony of sounds that often came with such dark lyrics.  I appreciated Metal, Punk and Grunge for their rebellious attitudes and their ability to embrace the darkness, but often times the music was too angry and aggressive.  I liked the upbeat sound of Pop music, but I found the lyrics lacking and the message often empty. But in Garbage I found exactly the right mix of evanescent sound, dark lyrics and surprising intelligence. 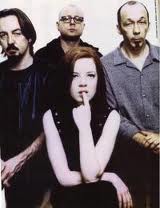 Garbage was formed in 1994 by Duke Erickson, Steve Marker and Butch Vig. Vig had been in various bands throughout the 1980s and had gone on to produce some huge names, including Nirvana, before striking gold with Garbage.  The guys decided they wanted a female lead singer and picked Shirley Manson out from her Angelfish video for “Suffocate Me” on MTV.  She was just the right combination of sass, sarcasm and sexy that would make the band come alive.  Never mind that she lived in Scotland and they were living in Wisconsin at that time.  They could make it work!

Vig took his talent for remixes into the studio for Garbage’s first album.  Instead of composing straightforward tracks with traditional instruments, they tore the tracks apart and added in layers and loops.  They manufactured backup vocals and included all kinds of electronic sounds.  This use of technology in composing gave them their unique sound and their band name.  In an interview they said that a friend came to visit them while they were recording their album and told them the mashed-up music sounded like garbage.  And so the name stuck, but their success has been anything but garbage.

“Vow” was the first single off their debut album.  According to Vig, the inspiration for the song was a newspaper article about a woman who had gone back to get revenge on an abusive husband, “so we thought it would be cool to get a bit of retribution in there.” Vig also said he noted violence could also come from psychological stand point by seeing the story of a sado-masochistic couple who could not keep away from each other.Lyrically, Manson claimed “‘Vow’ is about having feelings [of vengeance]. You have to face your feelings of revenge and work out why you feel that way. It’s about that conundrum when you’re really angry but in reality you’re in a pitiful state. Angry, twisted, but deep down, vulnerable. “During promotion for the song, Garbage joked to journalists that “Vow” was about John and Lorena Bobbitt.

“Only Happy When It Rains” was the second single.  Lyrically, Manson described “Only Happy When It Rains” as “about wanting love but knowing life will always get in the way…. yet not being obliterated by that. It’s a song for people that know what it is like to live on the dark side of life. It’s about devotion but a different kind. Devotion to the truth and to freedom… and to hell with the consequences.” Although Garbage has had many memorable hits, they will perhaps always be known by this song, as it embodies what they are all about.

“Queer” was their third single.  Garbage incorporated a sample of the drumline from New Zealand band Single Gun Theory’s track “Man of Straw” on “Queer“;this loop was layered with an additional drum part performed by Madison percussionist Clyde Stubblefield, who was known for being the most sampled drummer in history for his unaccredited part on James Brown’s “Funky Drummer”  Manson later explained, “It’s not, as you might think, to do with being gay, but tolerance…that is that you think you are normal and the rest of the world is freaky, but we’re all equally to blame.” Garbage did not write the song to particularly appeal to the gay community, however Erikson stated: “The song isn’t about sex at all; it’s about the loss of innocence.” 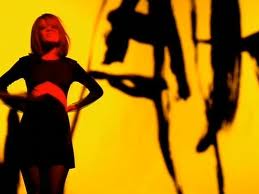 They also released “Supervixen” and “Stupid Girl,” which became hits as well.  Both songs were about women’s roles in relationships and society.  Manson stated that “Supervixen” “is all about saying ‘idolize me, I’m going to give you everything you want, but you have to do something in return’. It’s a bargaining song about a relationship.”  Manson aimed the song “Stupid Girl” as a rebuke towards a friend’s foolish behavior: “A lot of females still find it difficult to find their own voice in society. It’s just that women have a different set of problems from men… make the most of your potential.”

Some of my favorite songs, however, were not released as singles.  “Dog New Tricks” takes on the idea that human’s are the ones who have a hard time learning new things.  Manson sings, “Dog new tricks. Nothing you learn will stick, You make me feel so worthless.”  She is getting tired of being with people who don’t make her feel special.  Perhaps she is even tired of being abandoned time and time again.  She continues on to sing, “Everyone I know has gone, died, left or just forgot to stay.”  Having abandonment issues myself; this particular line resonated with me. 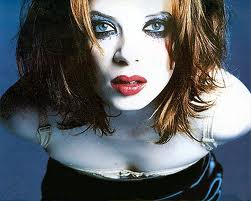 “As Heaven is Wide” was another unreleased song that I liked.  Though not really a Christian song, it used a lot of Christian symbolism in the lyrics.  Words like God, Heaven, Angels, Holy and Hell reinforce the theme something sacred being violated. Manson sings, “My trust was blind you broke the pact. If gods my witness god must be blind. If flesh could crawl. My skin would fall. From off my bones and run away from here. As far from god, as heaven is wide.”  It is a very angry song, and yet she sings it coolly and calmly. You can hear the pain in her voice, but it is not over done.

The last single from the first album was “Milk.”  Manson was inspired by a line in Michael Ondaatje’s The Collected Works of Billy the Kid (“her throat is a kitchen”) and eluded to it in her lyrics for the song.At its base, Manson believed the song was “a seduction, almost like a siren song”  The most electronic based song on the album, “Milk” is also one of singer Shirley Manson’s favorite tracks from it. She told Melody Maker “It’s a dichotomy, a paradox. The thing I really like about “Milk” is the fact that it’s been dismissed by people as the ballad at the end of the album. To me “Milk” is the darkest, most hopeless of the songs. People say ‘Oh, it’s lovey-dovey, so therefore it’s a love song’. But it’s a very bleak song, it’s about loss and the fear of loss; about things you can’t have and things you will forever wait for.”

Garbage is anything but.  They’ve proven their worth with a solid first album and then several more afterward.  I, for one, am always eager to hear anything new they might put out.  Though perhaps nothing will ever recapture the magic I felt listening to the first album.  Garbage captured the mood of the moment in society and in my life.  And for that, I will always come to associate them with my ever-blossoming self as I expanded my horizons back in 1995 and 1996.

Reading and writing and writing about reading are my passion. I've been keeping a journal since I was 14. I also write fiction and poetry. I published my first collection of short stories, "Radiant Darkness" in 2000. I followed that up with my first collection of poetry in 2001 called "Journey without a Map." In 2008, I published "Persephone's Echo" another collection of poetry. Since then I've also published Emotional Espionage, The Way The Story Ended, My Perfect Drug and Out There. I have my BA in English from The Ohio State University at Mansfield and my MA in English Lit from The University of North Carolina at Greensboro. I also have my Post BA Certificate in Women's Studies. I am the mother of two beautiful children. :-)
View all posts by carilynn27 →
This entry was posted in Literature/Pop Culture, Music and tagged 1994, 1995, 1996, Alternative, Angelfish, Anger, As Heaven Is Wide, Butch Vig, Cari Gilkison, Cari Lynn Vaughn, Dance, Depression, Dog New Tricks, Duke Erickson, Electronic, Garbage, Garbage is Not Pure Rubbish, Grunge, Loss of Innocence, Love, Man of Straw, Metal, Micaheal Ondaatje, MTV, Nirvana, Only Happy When It Rains, Pop, Punk, Queer, Reveange, Sacred, Sex, Shirely Manson, Single Gun Theory, Siren Song, Steve Marker, Stupid Girl, Suffocate Me, Supervixen, The Collected Works of Billy The Kid, Violation, Vow. Bookmark the permalink.