Aimless Ambition in The Red and The Black

Aimless Ambition in The Red and The Black 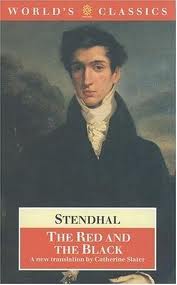 Julien wants to get away from the lower class that he despises.  He is driven by ambition to rise above his place in life.  What Julien doesn’t realize is that his ambition is pointless.  He can do whatever it takes to gain money, social status and power, but unless he becomes a better person it is all pointless.

Julien has potential to do good, but throughout the course of the novel he merely sinks deeper into lust and greed.  It begins with the growing bitterness he has for his childhood. “For Julien, making his fortune meant first and foremost getting out of Verrieres; he loathed his native town.”  As soon as he is exposed to the higher classes, he begins his downward spiral.  The start of it all is his meeting with Mme de Renal.  Lust and the possibility to gain something out the situation leads Julien to getting involved with his Master’s wife.  Propelled by the excitement of secrecy, the relationship intensifies and comes to an abrupt and turbulent ending.

Julien is sent away and placed in another situation, this time at a seminary that could straighten him out or give him temptation to do more immoral things.  Blinded by his ambition and his need to make connections, he ends up digging his hole deeper.  Getting caught with his connection’s address he found trouble at the seminary created more problems for him.  “Julien had little success with his attempts at hypocrisy in the matter of gesture; he fell into bouts of repugnance and even total demoralization.”  Because his intentions were not pure, the seminary handed him over to someone else.

It was in his final situation in Paris that leads to his death.  After socializing and making connections, he found Mathide la Mole. La Mole was a Duchess with all the money, status and power he could ever hope for.  Though not attracted to her initially, he eventually finds himself more and more drawn to her.  In Mathide he has found someone of his own ambition.  She longed for danger and excitement, which Julien provided for her.  She knew that, “Julien did not see in all of this beyond the petty mindlessness characteristic of the rural middle class,” but she gets more than she bargained for.  When she ends up pregnant, the game changes.  After some conflict, Julien is at last assured the money and status he desired.

What he didn’t count on was Mme de Renal unburdening herself and threatening to go public with the details of their sordid affair.  His passion, his weakness, overwhelms him and he rides off to shoot her. He had to stop her from ruining him at all costs.  If ambition was a good thing would it drive him to murder?  Not thinking of the consequences, he makes an attempt on her life.  After being seized and taken to hail, he realizes this is his big chance at redemption.  Instead of seeing all of his failures as failures though, he feels he should become a martyr.

Julien, in his own mind, has accomplished something.  In the readers mind, he will die as poor as he was born.  He did not ever know pure, unselfish love.  He strived for what he called Cerebral Love.  “Cerebral Love doubtless has more wit than real love, but it only has brief moments of enthusiasm,” he explains.  His happiness faded as quickly as it had come to him.  He never learned how to be a better person or improve the world in any way.  Stendhal took five hundred pages to show us that ambition is aimless and pointless.

Reading and writing and writing about reading are my passion. I've been keeping a journal since I was 14. I also write fiction and poetry. I published my first collection of short stories, "Radiant Darkness" in 2000. I followed that up with my first collection of poetry in 2001 called "Journey without a Map." In 2008, I published "Persephone's Echo" another collection of poetry. Since then I've also published Emotional Espionage, The Way The Story Ended, My Perfect Drug and Out There. I have my BA in English from The Ohio State University at Mansfield and my MA in English Lit from The University of North Carolina at Greensboro. I also have my Post BA Certificate in Women's Studies. I am the mother of two beautiful children. :-)
View all posts by carilynn27 →
This entry was posted in Literature/Pop Culture, Politics/Economics and tagged 1996, Aimless Ambition, Cari Gilkison, Cerebal Love, Class, Duchess, Failures, French Literature in Translation, Happiness, Julien, la Mole, Love, Lust, Martyr, Mary Joyce, Master, Mme de Renal, Money, OSU, Paris, Power, Pregnancy, Redmption, Rural, Status, Stendhal, The Red and the Black, Wealth. Bookmark the permalink.