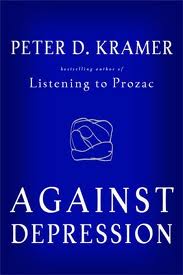 Against Depression by Peter D Kramer came out in 2005.  Kramer examines what depression is, including apathy, guilt and listlessness. He covers the social attitude toward depression as well as the genetic role in depression.  He moves on to cover the roll of ambivalence toward the human condition and then addresses the physical aspects and affects of depression.

Adrenal glands release stress hormones and cause the hippocampus to shrink.  People who are depressed do indeed think less than people who do not suffer from depression.  Overwhelmed neurons can become isolated and die.  Excessive production of stress hormones can decrease bone density, cause us to age prematurely and cause us to slowly fail at our ability to bounce back from traumatic events.  Depression affects multiple organs and multiple parts of our lives.  For example, 60% of patients with heart-attacks also suffered from some level of depression! 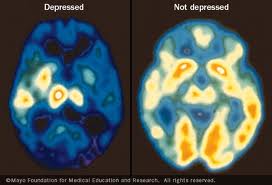 He stresses that depression is NOT a normal variation of feeling and should not be except as such.  Having a lot of empathy toward others is NOT depression either.  There are emotionally intense people who never suffer from depression at all. Depression is, however, characterized by dependency and desperation. Descriptions of depression tend to focus only on the pain and confusion though. 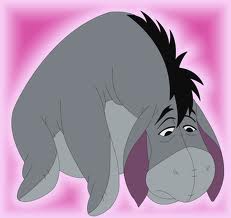 Dysthmia is a low mood for a long period of time without any major depression.  It will present itself as a bad attitude more than an illness but still cause lots of issues such as work loss and even suicide attempts.

Ataraxia is known as serene detachment.  A person will avoid disruptive passions by limiting his emotional investments.  It is barely a state of contentment to ward of depression and involves a sober mistrust of comment and constant awareness of life’s pains.

In the end, nature and nurture play a role. What predicts an episode of major depression? Being robbed or assaulted, facing housing or financial problems, losing a job or even just problems at work, martial problems, divorce and losing a friend can all be triggers.  A humiliating loss is the worst possible even for someone prone to depression.  Interestingly, cancer patients often get depressed due to their illness.  Pancreatic Cancer is associated with particularly high levels of depression.  I guess there is a high plasma cytokine levels in Pancreatic Cancer patients which mimics an interferon-induced depression.  Anyway, the more depressed you are the more you tend to continue to contribute to your own misery.

Alcoholism tends to cluster in families with depression.  The combination of depression and drinking can be twice as devastating as depression alone.  Low levels of stress will continue to cause episodes of depression even in the absence any real trauma.  However, losing a parent at an early age may not be traumatic if that child has a supportive family and is able to finish high school.  If we work to prevent low self-esteem early on then we can also work to prevent depression from developing.

Suicide is less frequent among those who are medicated for depression; however it can make depression worse in some people. Prozac offers protection and can stimulate new cell formation in the hippocampus.  Psycho-Therapy is needed in addition to medication for most patients.  Talk therapy alone can be successful for those with mild depression. 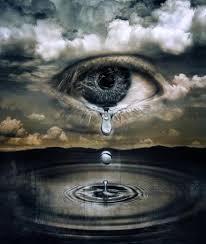 Why is that we romanticize melancholy?  Certainly, Kay Jameson Redfield’s book Touched with Fire romanticizes it.  But Kramer is decidedly against depression.  He believes that the evidence linking depression to creativity is shaky at best. He says, “Romantic poetry, religious memoir, inspirational tracts, the novel of youthful self-development and grand opera and the blues portray depression as an affliction that inspires art and art forms.”  Poets and writers in particular suffer from heroic melancholy—suffering for their art.  Why is this? “Depression is becomes a universal metaphor, standing in for sin and innocent suffering, self indulgence and sacrifice inferiority and refinement,” Kramer says. Grief has become a model for romantic love and it shouldn’t be.  Depression is not to be blamed on artistic temperaments or poor choices in life.

Many writers suffer from social awkwardness, depression, bi-polar disorder, epilepsy and narcissism.  Writing does provide a sort of treatment for depression it seems.  Perhaps dealing with depression is a matter of having certain tools at hand and a new way of dealing with difficult emotions.  We might come to identify passion with an inner sense of security and confidence eventually.  And then when we do not fear depression any longer we might be free to love more generously. 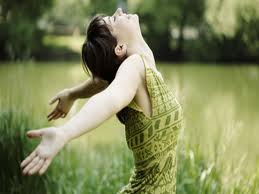 Reading and writing and writing about reading are my passion. I've been keeping a journal since I was 14. I also write fiction and poetry. I published my first collection of short stories, "Radiant Darkness" in 2000. I followed that up with my first collection of poetry in 2001 called "Journey without a Map." In 2008, I published "Persephone's Echo" another collection of poetry. Since then I've also published Emotional Espionage, The Way The Story Ended, My Perfect Drug and Out There. I have my BA in English from The Ohio State University at Mansfield and my MA in English Lit from The University of North Carolina at Greensboro. I also have my Post BA Certificate in Women's Studies. I am the mother of two beautiful children. :-)
View all posts by carilynn27 →
This entry was posted in Health, Psychology, Science/Philosophy and tagged 2005, 5-HTT, abused, Adrenal Glands, Against Depression, aging, Alcoholic, alcoholism, artistic personality, ataraxia, Bi-Polar, cancer, creativity, Depression, duration, dysthmia, episode, experience, Freedom, genes, heart attacks, heritability, hippocampus, Hormones, interferon induced depression, Listening to Prozac, longevity, Medication, Melancholy, Memoirs, months, Nature, neurons, neurotics, nurture, occurrence, organs, pancreatic cancer, Peter D. Kramer, poets, rejection sensitive, social awkwardness, Stress, Suicide, talk therapy, Touched With Fire, Trauma, weeks, Writers, years. Bookmark the permalink.

1 Response to Against Depression