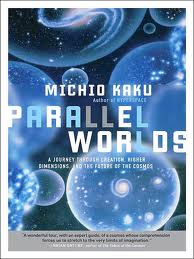 Parallel Worlds by Michio Kaku came out in 2005.  In his preface his discusses everything from Galileo Galilee to Copernicus to Kepler to Newton to Hubble to Einstein and beyond. Then Kaku begins at the beginning, literally.  He speaks of Chinese mythology and how earth was created from an egg and how in Greek mythology the earth was created from chaos.  In Egypt we have Ra and the floating Egg.  In Polynesia the cosmic egg takes the form of a coconut shell.  The Mayans believed that the Universe lives, dies and is reborn. 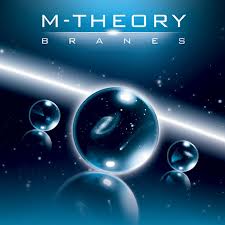 From the idea of a baby universe that looks like an egg he moves onto M-Theory and String Theory.  He gives a detailed analogy saying that musical notation is like mathematics, violin strings are like superstrings, notes are like subatomic particles, the laws of harmony are like physics, the universe is like a symphony of strings, the mind of god is music resonating through space and the composer is a giant question mark. 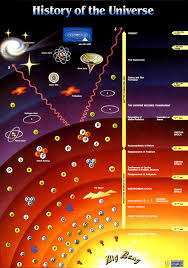 The Universe is not infinitely old, although it is billions of years old.  13.7 to be exact.  If you traveled faster than the speed of light the light would appear motionless and frozen. There is a genesis to the universe, hence, the Big Bang Theory.  Hundreds of people have collected data that points to the event known as the big bang.  The Big Bang probably didn’t make a sound in empty space, but it was a small explosion of energy.

From there Kaku goes on to talk about the beginning of Quantum Physics.  He speaks of Hubble and how he discovered that the universe is still expanding.  He talks about Omega and how the average density of the Universe is -1.  Lambda is dark energy and empty space at 0.  Omega plus Lambda =1 and a flat universe.  Omega 1 means the universe is curved like a circle.

Blackholes are the next subject he goes over.  Are they wormholes or Einstein-Rosen bridges?  Or would you be instantly crushed to death and slip into nothingness?  Some people think that blackholes would allow you to time travel.  Hawking say s that time travel is not impossible, but it is unlikely and impractical. Kaku also mentions The Hitchhiker’s Guide to the Galaxy and Philip K Dick’s The Man in the High Castle.

All energy occurs in discrete packets called Quanta.  The W&Z are the weak forces.  There are gravitons, bosons and gluons.  Matter is represented by point particles, but probability obeys the wave equation.  Before an object exists it exists in all possible states. It is our observation of it that makes it form into a definite state.  So is reality objective or subjective then?

Erin Schrödinger came up with the Cat Problem.  There is a cat in a box and there is a container full of poison.  While the box is close the cat is both alive and dead. It isn’t until you open the box that you bring into reality one possibility or the other.  Once you open the box then you determine rather the cat remains alive or if it is killed by the poison.

Is it possible that the other universes are a sort of trial and error for this one?  Maybe, but each universe has its own matching laws and principles.  Everything had to be just right in this world in order for it to work.  The earth had to be just the right distance from the sun and have just the right atmosphere to support life, etc.  Does this mean that there are no coincidences?  There are too many variables in order for them to just be “happy accidents.”

What about gravity? Can there be such a thing as super-gravity? Does gravity leak into higher dimensions? Are there galaxies behind galaxies? There are Gravity Wave Detectors now that help us determine such things.

If there was a beginning to the universe will there be an end?  Will there be a Big Crunch at the end?  Will the universe grind to a halt or collapse upon itself?  Matter doesn’t die. It just transforms, so perhaps death can be defined as the final cessation of all information processing.  Can we escape the death of our world or our universe by escaping into another universe?  Theoretically we could create baby universes along with warp drive.

What lies beyond the multiverse?  As Thomas H Huxley once said, “The question of all questions for humanity, the problem which lies behind all others and is more interesting than any of them, is that of determination and man’s place in nature and his relation to the cosmos.”  We live in a participatory universe.  We may not know if our clones will have souls, but we do know that the choice is ours to find or create purpose in our lives.  It is, in fact, our destiny to do so.

Reading and writing and writing about reading are my passion. I've been keeping a journal since I was 14. I also write fiction and poetry. I published my first collection of short stories, "Radiant Darkness" in 2000. I followed that up with my first collection of poetry in 2001 called "Journey without a Map." In 2008, I published "Persephone's Echo" another collection of poetry. Since then I've also published Emotional Espionage, The Way The Story Ended, My Perfect Drug and Out There. I have my BA in English from The Ohio State University at Mansfield and my MA in English Lit from The University of North Carolina at Greensboro. I also have my Post BA Certificate in Women's Studies. I am the mother of two beautiful children. :-)
View all posts by carilynn27 →
This entry was posted in History, Science/Philosophy and tagged Alive, Atoms, Beginning, Big Ban Theory, Big Crunch, Blackholes, Bosons, bubbles, Cosmic Egg, Creation Myths, Dead, End, Genesis, Gluons, God, gravitons, Gravity, Gut Era, Heliium, Hyrogen, Inflaction, Kelvin, M-Theory, Michio Kaku, Multiverse, Music, objective, Parallel Worlds, particales, physics, Planek Era, Quanta, Quantum Physics, Quark, Reality, Shrodinger's Cat, space, String Theory, subatomic particles, subjective, Superstrings, Temperature, Time Travel, Universe, Waves, Wormholes. Bookmark the permalink.