The Gospel of Thomas 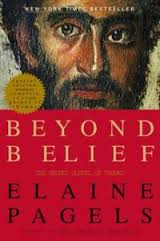 Beyond Belief: The Secret Gospel of Thomas by Elaine Pagels came out in 2003. The Gospel According To Thomas was discovered near Nag Hammadi, Egypt, in December 1945, in one of a group of books known as the Nag Hammadi library. It was written in Coptic. Pagels points out that in spite of its being left out of the Catholic canon, being banned and sentenced to burn, many of the mystical elements have proven to reappear perennially in the works of mystics like Jacob Boehme, Teresa of Avila and Saint John of the Cross.

Unlike the canonical Gospels, it is not a narrative account of the life of Jesus; instead, it consists of sayings attributed to Jesus, sometimes stand-alone, sometimes embedded in short dialogues or parables. The text contains a possible allusion to the death of Jesus in logion 65, but doesn’t mention crucifixion, resurrection, or final judgment; nor does it mention a messianic understanding of Jesus.

The Gospels conflict in information and versions.  John is more spiritual.  In the Gospel of Mark Jesus is divine and not merely human.  Mathew, Mark, Luke and John discuss the end times, but John and Thomas only discuss the beginning of things.  Thomas is Greek for Twin.  Was this the first name of Judas? In any case, Mark seems to be the basis for both John and Judas Thomas Gospels.

It was John who created the idea of the Doubting Thomas.  Who was John? A follower of Jesus who lived in Ephesus or Antioch 90-100 C.E. John the Gospel writer was a follower of John the Baptist.  Christians assume that John is the brother of James and that Jesus loved John.  Mathew, Mark and Luke along with Peter were the first to believe in Jesus as the Messiah.  Later John and the Apostle Paul believed as well.  Thomas misses the last supper because he is not an apostle.

The disciple Luke wrote to Paul of Tarsus.  Luke claimed to have a divine vision of Jesus choosing Paul as a special representative for him.  Paul called himself Apostle from the Greek Apostolos, which is Greek for Representative.

Gaius, a Christian leader in Rome, charged that the Gospel of John and Revelations were not written by John, but by a denounced heretic.  Bishop Irenaeus claimed to be practicing the true religion because he’d been taught by Polycarp, who heard John the Baptist speak.  Irenaeus also had a friend, Florinus, who joined Valentinus in the so-called Gnostic sect.  Once Bishop Pothinks dies, people looked to Irenaeus for leadership.

At this time many people claimed to have Charismata or the ability to heal, exorcise, prophesize and even raise the dead.  Who can tell the Holy Spirit to stop or when it has stopped on its own?  Claim of direct revelations can be chaotic, confusing and down right dangerous.  That is why Bishop Irenaeus and other felt it was important to declare that the age of miracles was over.  The Gospels were no longer to be taken literally.

After this effort to unite Christianity and the Church many “secret” writings surfaced. Egyptian monks recopied the texts from Greek to Coptic and kept them.  In 378 C.E. the Bishop of Alexandria demanded that all non-canonical texts be destroyed.  St. Pachomius gathered the Books of Athanasius and buried them in a heavy 6ft Jar at Nag Hammadi. They weren’t discovered until some 1600 years later.

So how were the canonical texts chosen?  Irenaeus created the pillars of four.  He chose the four Gospels supposedly written by Jesus’ disciples who were eye witnesses to the events.  New Testament scholars do not know who wrote the Gospels. They claim that they don’t really know who wrote the four Gospels.  To this day though, many traditionally minded Christians believe whatever trespasses conical guidelines must be “lies and wickedness” that came from the evil of the human heart or the devil.

The Council of Nicea was held in June of 325.  The Bishops (or Supervisor in Greek) hoped to resolve all conflicts facing Christians at the time.  Bishop of Alexandria was the successor of Athanasius and he contested certain texts that Arius threw out.  Athanasius was challenged and then forced into exile.  Bishop Gregory from Cappadocia took over. In the year 367 C.E. we have the earliest list of the 4 Gospels plus 22 Old Testament books that were to become the bible.

So how do we tell the truth from the lies?  Jesus says Seek and Ye Shall Find.  It may be a difficult path to sort through all this information on our own, but it is our choice in the end.

Reading and writing and writing about reading are my passion. I've been keeping a journal since I was 14. I also write fiction and poetry. I published my first collection of short stories, "Radiant Darkness" in 2000. I followed that up with my first collection of poetry in 2001 called "Journey without a Map." In 2008, I published "Persephone's Echo" another collection of poetry. Since then I've also published Emotional Espionage, The Way The Story Ended, My Perfect Drug and Out There. I have my BA in English from The Ohio State University at Mansfield and my MA in English Lit from The University of North Carolina at Greensboro. I also have my Post BA Certificate in Women's Studies. I am the mother of two beautiful children. :-)
View all posts by carilynn27 →
This entry was posted in History, Religion and tagged 325 C.E., Apostle, Beyond Belief, Bishop of Alexandria, canon, canonical, Catholic, Charismata, Christian, Council of Nicea, crucification, darkness, Disciple, Doubting Thomas, Elaine Pagles, Heresy, Holy Spirit, Jacobe Boehme, Jesus, Jewish Mysticism, John, John the Baptist, light within, Luke, Mark, Mathew, Miracles, Nag Hammadi, Narrative, Orthodoxy, Paul, Polycarp, Saint John of the Cross, Teresa of Avila, The Secret Gospel of Thomas, Visions. Bookmark the permalink.