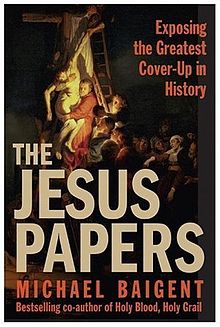 The Jesus Papers: The Greatest Cover Up in History by Michael Baigent was published in 2006.  The book documents the political context of Jesus’ birth, and then goes on to examine the history of the migration of the family of Jesus, the chronicles of his teachings, and his death.

The book opens with the Saint Sulpice at Abbe Sauniere in France.  There is a picture of Jesus being carried out of his tomb at night.  What ever could this mean?  Could Jesus have faked his own death, gotten married and moved to France?  Baigent thinks so.

Jesus was brought up to fulfill his role as Messiah.  He was a Son of David in the Royal Line and perfect to fit the prophecy.  He was trained to fill a role as Messiah for the Zealots, but he did not want to start a war or kill anybody. So, Jesus faked his death and was smuggled out of Jerusalem by Joseph of Arimathea along with Mary Magdalene, his wife.  Eventually Jesus and Mary moved to France.

Michael Baigent claims to have seen two papyrus documents, the so-called “Jesus papers,” written in Aramaic. They were discovered in the Old City of Jerusalem during the 1960s. Baigent claimed these documents dated to AD 45 and were letters to the Sanhedrin from bani meshiha (“the Messiah of the Children of Israel”), defending himself against the allegation that he claimed to be the Son of God.

Baigent claims these two papyrus documents were authenticated by the Israeli archaeologists Yigael Yadin and Naham Avigad, which distressed Pope John XXIII. The Pope asked Baigent’s friend to destroy these two papyrus documents, but he refused and said he would release them after 25 years. However, the documents have not been released because of the rift this information would create between Israel and the Vatican, also creating a revivalism of Anti-Semitism.

The mysterious priest and mysterious documents that no one has seen makes me a bit skeptical. However, there have been others who have come to the conclusion that Jesus did NOT die on the cross before he did.  Perhaps Baigent didn’t have the most solid of proof, but that doesn’t mean he didn’t latch onto a grain of truth somewhere.  I think there is a possibility that Jesus didn’t die on the cross and that, in all likelihood, he was indeed Mary to Mary Magdalene.  Was Jesus the Son of God?  That is perhaps debatable.In any case, the book is worth a read even if you don’t buy into the hype.  There is much to ponder.

Reading and writing and writing about reading are my passion. I've been keeping a journal since I was 14. I also write fiction and poetry. I published my first collection of short stories, "Radiant Darkness" in 2000. I followed that up with my first collection of poetry in 2001 called "Journey without a Map." In 2008, I published "Persephone's Echo" another collection of poetry. Since then I've also published Emotional Espionage, The Way The Story Ended, My Perfect Drug and Out There. I have my BA in English from The Ohio State University at Mansfield and my MA in English Lit from The University of North Carolina at Greensboro. I also have my Post BA Certificate in Women's Studies. I am the mother of two beautiful children. :-)
View all posts by carilynn27 →
This entry was posted in History, Religion and tagged Aramaic, Christ, Crucifixion, Egypt, Faked Death, France, Friend, Holy Blood Holy Grail, Jerusalem, Jesus, Mary Magdalene, Messiah, Michael Baigent, Naham Avigad, Not Son of God, Preserved Papers, Priest, Prophecy, Royal Line, Safe, Son of David, The Biggest Cover Up in History, Wife of Jesus, Yigael Yadin, Zealots. Bookmark the permalink.