Ego and Archetype: Individuation and the Religious Function of the Psyche by Edward F Edinger came out in 1972.  I read it in 2000.  It proved very insightful and was very influential on me.

Man’s consciousness was created to end that it may 1) Recognize its descent from a higher unity 2) Pay due and careful regard to this source 3) Execute its commands intelligently and responsibility and 4) Thereby afford the psyche as a whole optimum degree of life and development.

The Ego is the seat of subjective identity while the self is the seat of objective identity.  There is a wholeness, totality and unity of opposites in the self.  The center of the self is the axis of the universe—the world navel where God and Man meet.  The fact is the conception of the self is a paradox.  It is simultaneously the center and the circumference of the circle of totality. However, with Primitives the inner and outer self are not at all distinguished.

M.L. Von Franz discusses the inflated state of the ego.  It is a state of childish irresponsibility and dependence.  “With this there is often, to a smaller or greater extent, a savior complex or messiah complex with the secret thought that one day one will be able to save the world or have the last word in Philosophy or Religion or Politics or art or something else.  This can go so far as to be a typical pathological megalomania or there may be minor traces that ones time has not yet come.  The one thing dreaded throughout by such a type of man is to be bound to anything whatsoever.  There is a terrific fear of being pinned down, of entering space and time and completely being the human being that one is.”

The whole body of Greek Tragedy depicts the fatal consequences of when man takes the vengeance of God into his own hands.  Sometimes the Inflated Ego becomes the Divine Victim saying, “No one in the world is as guilty as me.” Solipsism enters into this in that there is nothing beyond the self and the self’s experience to the inflated ego. 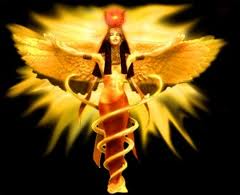 Ophites worshiped serpents.  They believed the serpent to be good.  The serpent represented gnosis or knowledge.  The temptation that condemned Adam was the urge for self-realization and individuation.  That was the birth of the ego.  However, the greater consciousness often equaled suffering.  Adam and Eve might have been immortal before the fall, but they were also unconscious.  The Tree of Knowledge and the Tree of Life in the Hebrew legends were connected.  We could only gain access to the Tree of Life if we tasted the fruit of the Tree of Knowledge.

The person with an inflated ego is afraid to make the commitment required to create something real.  He would lose the security of anonymity and expose himself to disapproval. He is afraid to submit himself to the judgment by being something defined. This amounts to living in “the garden of Eden” state and not daring to eat the fruit of consciousness. Christians then equate sin with ego inflation

The Garden of Eden is similar to the myth of Prometheus in Greek Mythology.  Prometheus tricks Zeus and becomes a Lucifer type figure that creates suffering in the world.  Zeus, like Yahweh, withholds fire and knowledge.

The acquisition of consciousness is a crime, an act of his hubris against the powers that be, but it is a necessary crime, leading to a necessary alienation from the nature unconscious state of wholeness.

The early phase of the developing self-ego axis may be identical with the relationship between the parent and the child.  At any time during this development, the axis may be damaged or delayed. Psychotherapy offers such a person to experience acceptance.

Cain is an archetypical figure representing the experience of rejection and alienation.  His  reactions to an excessive and irrational rejection are characteristic of violence.  From an inner standpoint there is very little difference between murder and suicide.  The only difference is in which direction the destructive energy is moving.

Modern Existentialism can be considered symptomatic of the collected alienated state.  Alienation is not a dead end though.  Hopefully it can lead to great awareness of the heights and depths of life. Illegitimate children in particular usually have an alienation problem, what might be called an Ishmael complex.  The term comes from Moby Dick.

St John of the Cross called these religious experiences “The Dark Night of the Human Soul.”  Kierkegaard called it despair and Jung called it defeat of the ego.  All of these terms apply to the same psychological state of alienation. In any case, we find again and again that in all of these religious experiences there is a profound sense of depression, guilt, sin, unworthiness and complete absence of any sense of transpersonal support for one to rest upon.  The classic symbol of this state is wilderness sometimes called The Wilderness of Pain.

In Christianity people go to Purgatory to suffer and purge themselves of their sins.  The seven deadly sins are all symptoms of an inflated ego: Pride, Wrath, Envy, Lust, Gluttony, Avarice, and Sloth. Catholic Confession gives the individual a chance to unburden self and whatever made him or her feel alienated from God.

Alienation Neurosis in Psychology leads to an inferiority complex.  He assumes unconsciously and automatically that whatever comes of himself—his inner most desires, needs and interests—must be wrong or somehow unacceptable.  With this attitude psychic energy is dammed up and most people convert to unconscious or destructive ways.  Alcoholism, Panic Attacks, Depression, Suicide Impulses are all symptoms of an inferiority complex.

At a certain point in psychological development, usually after an intense alienation experience, the ego-self axis suddenly breaks into consciousness view.  As Jung says, one becomes two.

The Sacrificial Attitude occurs when the transpersonal center of the psyche or the ego recognizes its subordinate position and is prepared to serve the totality and its ends matter rather than personal needs.  Job in the bible becomes an individual through his trials.  Individuation is a process, not a realized goal.  You can recover a sense of wholeness.

In the early stages of Psychological Development God is hidden in the cleverest hiding place of all—in identification of one’s self or one’s own ego.  The Process of Individuation in Gnosticism is best represented by the Myth of Sophia, the Goddess of Wisdom.  An in Alchemy, the redemption of God is a basic theme.  The Alchemical Opus in and of itself is a work of redemption. For the Modern Man a conscious encounter with an autonomous archetypal psyche is equivalent to the discovery of God.

The ultimate goal of Jungian Psychotherapy is to make the symbolic process conscious. Man needs a symbolic life according to Jung.  But Modern Man often has no Symbolic life.  Man needs a world of symbols as well as a world of signs.  Both signs and symbols are necessary, but they should not be confused with each other.  A sign is taken of meaning that stands for a known entity. By this definition, language is systems of signs, not symbols.  A symbol, on the other hand, is an image.

Nirvana is not an escape from the reality of life. It is rather the discovery of the symbolic life, which releases man from this, “awful, grinding, banal life” which is only succession of meaningless symptoms.  Dreams are the expression of the ego-self axis and can help us make these symbols come to light.

To call no man father means to withdrawal all projections of the father archetype and discover it within yourself.  To take up one’s own cross would mean to accept and consciously realize one’s own particular pattern of wholeness.  The image of Christ gives us a vivid picture of the self-oriented ego, i.e. individuated ego which is conscious of being directed by the self. The temptation of Christ represents vividly the dangers of encounters with the self.

Christ is both man and God. As man he goes to the cross with anguish, but willingly as part of his destiny.  As God he willingly sacrifices himself for the benefit of mankind. Psychologically this means that the ego and the self are simultaneously crucified.

The Holy Ghost is a union of opposites.  Father is the self and the son is the ego and the Holy Trinity is the ego-self axis as a whole. It is like Hegel’s idea of thesis, antithesis and synthesis.  Or in Alchemy Mercury, Sulfur and Salt.  Or Mind, Body and Spirit.  The Trinity Archetype seems to symbolize the Individuation process, while the Quaternity symbolizes its goal or complete state.  Since Individuation is never truly complete each temporary state of completeness or wholeness must be submitted once again to the dialectic of the trinity in order for life to go on. 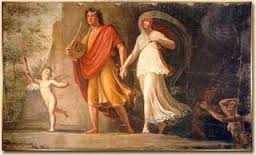 Reading and writing and writing about reading are my passion. I've been keeping a journal since I was 14. I also write fiction and poetry. I published my first collection of short stories, "Radiant Darkness" in 2000. I followed that up with my first collection of poetry in 2001 called "Journey without a Map." In 2008, I published "Persephone's Echo" another collection of poetry. Since then I've also published Emotional Espionage, The Way The Story Ended, My Perfect Drug and Out There. I have my BA in English from The Ohio State University at Mansfield and my MA in English Lit from The University of North Carolina at Greensboro. I also have my Post BA Certificate in Women's Studies. I am the mother of two beautiful children. :-)
View all posts by carilynn27 →
This entry was posted in Mythology, Psychology, Religion and tagged Able, Alchemey, Alcohol, Alienation, Avarice, Cain, Catholic, Childish, Christ, Christianity, Confession, Cross, Dark Night of the Human Soul, Dependence, Development, Divine Victim, Drugs, Edward Edinger, Ego and Archetype, Ego-Self Axis, Envy, Eog, Father, Fire, Garden of Eden, Gluttony, Gnosis, Gnosticism, God, Greek Tragedy, Hegel, Holy Ghost, Hubrius, Individuation, Individuation and the Religious Function of the Psyche, Inferiority Complex, inflated ego, Irresponsibilty, Ishmael, Job, Jung, Jungian, Keirkgaard, Language, Lucifer, Lust, M L Von Franz, Man, Meglomaniac, Murder, Nirvana, objective, Pride, Prometheus, Psychology, Psychotherapy, Sacrificial, Satan, Self, Self-Destructive, Serpents, Seven Deadly Sins, Signs, Sloth, son, Sophia, St John of the Cross, subjective, Suicide, Symbols, tree of knowledge of good and evil, Tree of Life, Trinity, Wholeness, Wisdom, Wrath, Zeus. Bookmark the permalink.