The Sociopath Next Door

The Sociopath Next Door 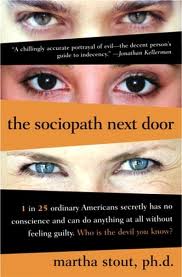 The Sociopath Next Door by Martha Stout, PhD, came out in 2005.  The Diagnostic and Statistic Manual of Mental Disorders 4 says that a sociopath is diagnosed with Anti-Social Personality Disorder and these are the characteristics: 1) Failure to conform to social norms 2) Deceitfulness and manipulativeness 3) Impulsivity and failure to plan ahead 4) Irritability and aggressiveness 5) Reckless disregard for the safety of self or others 6) Constant Irresponsibility 7) Lack of remorse at having hurt, mistreated or stolen from another person.

Sociopathy is, at its very essence, ice cold, like a dispassionate game of chess.  Often sociopaths are charismatic.  But they suffer from narcissism.  Originally they might have felt confused, alone and abandoned.  Eventually they come to be consumed by their own feelings and they are unable to understand what others are feeling. Sociopaths may marry, but not for love. Its like they know the words, but not the music.

Yes, these sociopaths may have been abused as children.  They are most likely suffering from attachment disorder though.  They suffer from severe emotional frustration as children.  Then as adults they end up with Adult Attachment Disorder.  They can fluctuate between being needy to being belligerent.

Interestingly sociopathy is rare in Asia where there is a sense of interconnectedness.  In the USA where Individualism is strong, sociopathy is more likely to occur.  Sociopaths make excellent warriors, assassins, snipers and soldiers.

Stout says we should avoid contact with “the sociopath next door.” Sociopaths are incurable and perhaps even suffer from “the selfish gene.”  Living or even just dealing with them with them will create an unhealthy sense of shame and may lead to depression and even suicide.  They are doomed to lead a failed life because a life with conscience is a failed life.

The Dali Lama commented on the sociopaths that committed the acts of terrorism on 9/11, saying, “Technology is a good thing, but the use of technology in the hands of people who don’t have well-developed human lives can be disastrous.”

Reading and writing and writing about reading are my passion. I've been keeping a journal since I was 14. I also write fiction and poetry. I published my first collection of short stories, "Radiant Darkness" in 2000. I followed that up with my first collection of poetry in 2001 called "Journey without a Map." In 2008, I published "Persephone's Echo" another collection of poetry. Since then I've also published Emotional Espionage, The Way The Story Ended, My Perfect Drug and Out There. I have my BA in English from The Ohio State University at Mansfield and my MA in English Lit from The University of North Carolina at Greensboro. I also have my Post BA Certificate in Women's Studies. I am the mother of two beautiful children. :-)
View all posts by carilynn27 →
This entry was posted in Psychology and tagged 2005, Abandoned, Abuse, Adult Attachment Disorder, Aggressive, Alone, Anti-Social Personality Disorder, Assassins, Chess, Cold, Confused, Deceitful, Depression, DSMIV, failure, Failure To Conform To Social Norms, Hurt, Irresponsibility, Irritable, Lack of Empathy, Lack of Remorse, Manipulative, Marry but not for love, Martha Stout, Narcissism, Reckless Rearguard For Safety, Snipers, Soldiers, Stolen, Suicide, Terrorism, The Selfish Gene, The Sociopath Next Door. Bookmark the permalink.