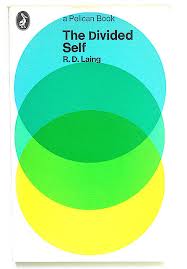 The Divided Self by R.D. Laing came out in 1960.  What was his message? His message was that maybe mad people are not as ‘mad’ as they seem; maybe they are just ‘divided selves’. Whilst simple, this was revolutionary. For centuries, society (we) had excluded, ignored, imprisoned, laughed at, and been afraid of these ‘mad’ people.

Laing discusses how the schizophrenic lives under the glare of the black sun. Everything withers under this black sun, which operates like an evil eye.  They are preoccupied with being seen or visible.  Sometimes they have fantasies of invisibility.  They feel like they can appear and disappear like they are still an infant playing peek-a-boo.

The schizophrenic may objectify or depersonalize.  They feel as if they are on the fringe of being.  They may even go so far as to feel as if they are a nobody and literally have no body.  Speaking of madness Yeats once said, “Things fall apart, the centre cannot hold. Mere Anarchy is loosed upon the world.”

Madness can be like psychic cancer—an overgrowth of something inside. It is a false sense of having one’s oxygen cut off.  Reality is broken down into pieces and the person is fragmented or shattered.  They may feel empty or dead inside while others may feel charged with hatred, fear and envy.

The mad may have mystical experiences.  They may suffer delusions and demonstrate odd behavior.  They feel like their selves have been lost, robbed, stolen or even murdered.  The reasoning is that if they are dead then they can’t be killed.  They cut themselves off from others and their heaven turns into a hell.

Sometimes the schizophrenic will have erratic and bizarre speech patterns.  Most of it is not important and a deliberate misleading away from the self.  The self is a pearl at the bottom of the sea and the psychiatrist must dive in to find it.  The schizophrenic doesn’t trust anyone, so treating them is particularly difficult.

Reading and writing and writing about reading are my passion. I've been keeping a journal since I was 14. I also write fiction and poetry. I published my first collection of short stories, "Radiant Darkness" in 2000. I followed that up with my first collection of poetry in 2001 called "Journey without a Map." In 2008, I published "Persephone's Echo" another collection of poetry. Since then I've also published Emotional Espionage, The Way The Story Ended, My Perfect Drug and Out There. I have my BA in English from The Ohio State University at Mansfield and my MA in English Lit from The University of North Carolina at Greensboro. I also have my Post BA Certificate in Women's Studies. I am the mother of two beautiful children. :-)
View all posts by carilynn27 →
This entry was posted in Psychology and tagged 1960, Bizzare Speach Patters, Dead Inside, Delusions, Does Not Trust, Fantasies of Invisibility, Fragmented, Glare of Black Sun, Healing, Heaven, Hell, Kill Themselves, Madness, Preoccupied with Being Seen, R.D. Laing, Reality, Schizophrenia, Shattered, The Centre Cannot Hold, The Divided Self, Things Fall Apart, Treatments, Yeats. Bookmark the permalink.