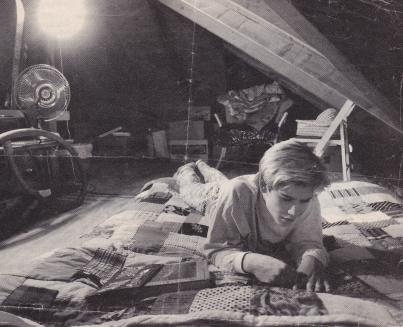 The first magazine article I read about the teen idol Mark-Paul Gosselaar was in People Magazine. They did a two page article about him in 1990.  It was all about how fame took its toll.   And how being a teen idol wasn’t necessarily what he wanted to be.  Signing autographs at the mall wasn’t what he had in mind when he decided to pursue acting.  In any case, when he was being interviewed he was also grounded.  Apparently he played Nintendo when he wasn’t allowed to and he came home late.

One of the first major roles Mark-Paul landed was in the 1988 PBS movie Necessary Parties. It was based on the book by Barbara Dana.  I read the book and absolutely loved it. In fact, I wrote to Barbara Dana and told her so and she actually wrote me back. I felt a bit of a connection to MP that way since Barbara Dana and her husband Alan Arkin were both in the movie and worked with MP.  Anyway, it frustrated me to no end that magazines kept misquoting the title of the movie as Necessary Pardons.

This is what MP said about his experience working on Necessary Parties.  “I worked with Alan Arkin who is a wonderful and funny actor. I learned a lot from him.  There was a scene in a movie we did together where I had to be really serious, crying almost, and Alan would make these faces at me.  I thought I was going to crack up, but it just made me concentrate more.  I really liked working with him.  Since my Mom couldn’t be on the set with me, I lived with him and his family for awhile in New York.  I learned so much.  I used to consult Alan instead of the direction when I had a question.  The director got a little made, but Alan thought it was pretty funny.”

He also confided that a few years prior to the interview, “I was standing on a fire hydrant and my Dad told me not to.  I did it anyway.  Then he went inside and I slipped and fell and scraped myself.  I got banged up pretty bad.  So I walked inside and I said Yeah this guy was riding a ten sped and knocked me over.  I told my Mom the truth afterward, but she never told my Dad though.”

TM asked him if he was an adventurer and what his idea of Adventure was and he said, “Yeah, I’m an adventurer. There is much adventure in Hollywood though.  I would love to go around and live the forests and act like Rambo in stuff.”  Perhaps the Producers of Saved by the Bell were reading, because later on he got to pretend to be Rambo when he took Slater’s place in an interview for Military school in a later episode.

MP found ways to be adventurous despite being stuck in Hollywood.  He loved to dance, to Surf, to Ski and to Race.  That is part of what I loved about him. He seemed cool and fearless and did things that I admired.  I often dreamed of doing those daring things by his side one day.

He began riding dirt bikes when he was only 3 yrs old! His first race was when he was only 5 yrs old.  At 18yrs old he got a Harley Davidson for a present.  He explained to Teen Beat, “The story is that I wanted to go to the Saved by The Bell wrap party on a bike with my Mom on the back.  I was thinking of buying a Harley, but I was going to buy it in the summer. I was going to borrow my friend’s bike. So, my friend comes rolling up on his motorcycle and I said, Wow I really want to ride it.  And he says this is my baby don’t crash it.  Here is the registration.  Memorize it in case you get it pulled over.  When I looked at the registration it said Mark-Paul Gosselaar.”

What did he have to say about girls? Lots. When asked if girls and boys could be friends he said, “This is so weird.  Yes, I do.  I think you can be just friends, but this is how it usually happens.  First I’ll go out with a girl, and then we break up. Then we’ll become friends, then we’ll become like best friends. It never happens the other way around. When I first meet a girl, if I think she’s attractive, I don’t think about becoming friends right off.  I think about going out with her.”

What does he look for in a woman?   He once was quoted as saying Romantic, Adventurous and Loves to Travel.  And I thought, well if that isn’t me I don’t know who it is!  He also said, “Someone who’s real down earth—I don’t like people who are really out there you know what I mean? Being phony and trying to impress me.  A lot of girls seem to want to meet me because I’m an actor. But for a girlfriend, I’d like someone who just likes me for me.” 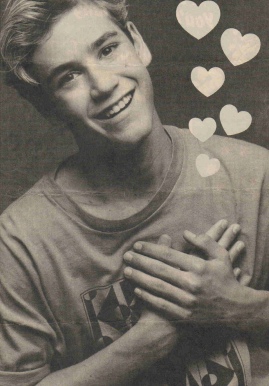 He’s revealed that he doesn’t like to take dates to clubs because they are too loud and it is too hard to talk.  He usually goes wherever his date would like to go because it is her night after all!

He revealed in several interviews that he dated Tiffani-Amber Thesian and Elizabeth Berkley. But it was Lark Voorhees that he stayed with for something like three years.  He never mentioned them dating while Saved by the Bell was still on the air. I guess maybe the producers and publicists thought it would be better if it wasn’t known he was taken.  But when he met Lisa Ann Russell on the set of Saved by the Bell the College Years I guess he felt like telling it to the world!

What kind of boyfriend is he?  He once said, “I am openly affectionate, I love to cuddle and I really enjoy being alone with a woman, just the two of us.”  He has also said that he is actually rather shy and has trouble opening up.  His ex-wife Lisa was the first who really understood that about him.

Super Stars asked him what is biggest fear is and answered, “That people confuse you with who and what you are. That’s one thing I really dislike about the business.  When you’re outside, the light has to go on. I know who I am. It’s just that other people sometimes don’t.” 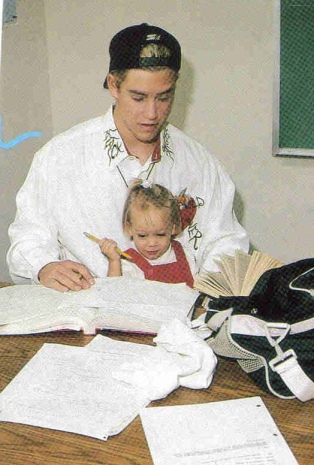 possessions that he prized. His most important possessions were in his head! Smart boy. But if the house was on fire what would he have grabbed? At the time he would have tried to save his mother and his niece Britany-Paula.

For those of you who didn’t know, Mark-Paul’s last name is Dutch. His father, Hans, came from Holland. He worked for Anheuser-Busch. His mother, Paula, was born in the Dutch Indies and worked for KLM Royal Dutch Airlines.  He used to go to Holland every year to be with his family, but as he got older he stopped going so much.  Even still, he is fluent in Dutch and can speak a little French.  I think his parents got divorced, though I’m not 100% sure. He has an older brother named Mike and two older sisters named Linda and Sylvia.  His brother and sisters were actually born in Holland, but he was born in Panorama City, California. At one time he used to want to be an architect.

He married Lisa Anne Russell on August 26, 1996 after dating for about two years.  They had two children. Michael Charles is now 9 yrs old and Ava Loren is now 7 years old.  He and Lisa Ann Russell divorced in 2010. She is now married to Jeff Probst.  Mark-Paul Gosselaar married Advertising Executive Catriona McGinn last year. They are now expecting their first child together.

After Saved by The Bell he acted a number of TV movies. My favorites were Born into Exile and The Princess and the Marine.  Eventually he got a break acting on NYPD Blue and Commander and Chief.  After guest staring roles in Weeds and Rizzo and Isles, he stared in the TNT series Raising the Bar for two seasons and currently he can be seen in the legal comedy Franklin and Bash.

Reading and writing and writing about reading are my passion. I've been keeping a journal since I was 14. I also write fiction and poetry. I published my first collection of short stories, "Radiant Darkness" in 2000. I followed that up with my first collection of poetry in 2001 called "Journey without a Map." In 2008, I published "Persephone's Echo" another collection of poetry. Since then I've also published Emotional Espionage, The Way The Story Ended, My Perfect Drug and Out There. I have my BA in English from The Ohio State University at Mansfield and my MA in English Lit from The University of North Carolina at Greensboro. I also have my Post BA Certificate in Women's Studies. I am the mother of two beautiful children. :-)
View all posts by carilynn27 →
This entry was posted in Flashback, Movies/TV and tagged 1988, 1990, 1996, 2010, Adventure, Alan Arkin, Attraction, Ava Loren Gosselaar, Barbara Dana, Beach, Bike, Born into Exile, Break-Up, California, Catriona McGinn, Charles in Charge, Children, Commander in Chief, Danger, Dating, Divorce, Down To Earth, Ducth, ego, Elizabeth Berkley, Fame, Fame Takes Its Toll, Flirt, Franklin and Bash, Friends, Girls, Grounded, Hans Gosselaar, Harley Davidson, Holland, Hollywood, Home Late, Jeff Probst, KLM Royal Dutch Airlines, Lark Vooheries, Linda and Sylvia, Lisa Ann Russell, Loves to Travel, Mark-Paul Gosselaar, Marriage, Michael Charles Gosselaar, Murphy Brown, Necessary Parties, Neice Britany-Paula, New York, Nintendo, NYPD Blue, Paula Gosselaar, People Magazine, Punky Brewster, Racing, Raising The Bar, Rebel, Rizzo and Isles, Romantic, Saved By The Bell, Skiing, Surfing, Teen Idol, The Netherlands, The Princess and the Marine, Tiffani-Amber Thesian, Valencia, Weeds. Bookmark the permalink.