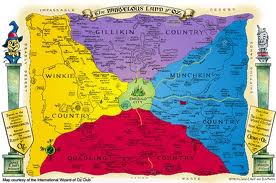 As a child I loved reading about the land of Oz. Although unique in that it was the first truly American Fairy Tale, there appears to be more to it.  I took an interest in New Age thought around 1990.  When I read about Edgar Cayce something struck me. Perhaps there was a connection between Cayce and Oz?

Cayce spoke of the Lost Tribes of Israel.  Hebrew people migrated to America during the time of the Assyrian Exile, which was around 722 BC.  These immigrants mixed with those descended from the people of Mu or Lemuria.  Specifically, Cayce said that the Inca’s were the successors of those of Oz or Og in the Peruvian land and successors of Mu in the southern portions of that now called California and Mexico and southern New Mexico.  The mention of migration from Lemuria and Atlantis connected to something else well. 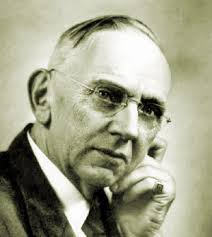 I often wondered if the writers of The Mysterious Cities of Gold hadn’t taken their myth of the Mysterious Cities of Gold directly from Cayce himself.  In the cartoon Atlantis and Lemuria fought a great battle and used nuclear weapons to destroy one another.  Before their ultimate destruction, the Emperor of Heba or Lemuria had seven cities of gold placed around the world.

These Cities of Gold coincide with Cayce’s idea of a migration of the people of Mu and the so-called Lost Tribes of Israel.   If these advanced people sailed to the YucatanPeninsula and parts of Peru then they could have very well influenced the Maya and the Incas. 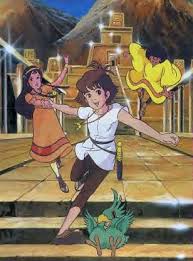 Atlantis and Lemuria was a favorite topic of Madam Blavatsky and of her Theosophy. It was known that L Frank Baum had a knowledge and interest in Theosophy.  Was his invention of Oz been coincidence or did he really view himself as a historian of some long forgotten island?

Dorothy gets carried away in cyclone—not a tornado. Cyclones are generally over the Pacific Ocean.  Later, in Ozma of Oz, Dorothy is on a steam ship bound for Australia with her Uncle.  When she is shipwrecked, she washes up on an island which holds Oz.  The island, like Australia holds deserts, mountains and farms land.  Dorothy encounters the land of Ev and then crosses the deadly desert before returning to Oz. 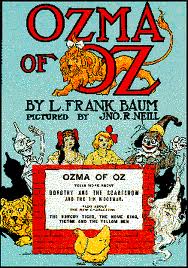 In Dorothy and The Wizard in Oz, Dorothy is in San Francisco when the earthquake hits. She falls down a crevice—presumably the San Andres Fault—and travels into an underground kingdom.  Eventually her travels lead her to Oz, which is presumably located in the Pacific.

We see that Oz is a magical country from the beginning, but we know little of its history.  Throughout his fourteen books, Baum gives a bit of back story here and bit there.  We discover that Queen Lurline and her band of fairies enchanted the land, making it difficult to visit and impossible to figure out the exact location of the island.  They make it so that no one ages and no one dies in their land.  People can be chopped into little pieces but they are unable to killed per se.  It is a paradise on earth filled with magic.  Wizards and witches were once quite common in Oz, but Ozma eventually outlawed the practice of magic except by The Wizard and Glinda. 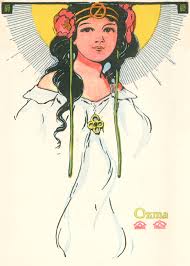 For the most part, people from the outside world know nothing of Oz.  The Wizard was the first outsider to arrive in his balloon.  Then later on Dorothy arrived in her house.  Dorothy returns several times before bringing her Aunt Em and Uncle Henry to live in Oz with her. Cap’n Bill, Trot, Betsy Bobbin and Button Bright are also visit and eventually live in Oz.

Interestingly Oz is a subtext to the TV show Lost. There are many parallels. Both Oz and the Island of Lost are located in the Pacific and notoriously difficult to find. However, people from the outside world have managed to stumble upon it at one time or another.  Both islands appear to be magical, though the Island of Lostattempts to explain some of its mysterious phenomenon via electromagnetic force.  The writer’s specifically alluded to Oz via Ben Linus’s alias Henry Gale.

One might wonder if both the Island on Lost and Oz were, in fact, part of the ancient Lemuria or Mu.  But nobody has ever really explored the connections of these magical islands to the Ancient Lost Civilizations in depth before.

Atlantis was first mentioned by Plato in Ancient times. Lemuria came into the picture in the 1864 with Zoologist Phillip Sclater and then later James Churchill.  Madam Blatsvksy elaborated on Churchill and other’s writings about the fabled lost city beginning in 1882.  Since then Geologists have “debunked” such theories with plate tectonics.  And perhaps Atlantis and Lemuria were not huge continents, but it is possible that they existed as small islands once in time.  Various sites have surfaced showing evidence that cities or parts of cities were submerged over the years.

Rather Atlantis and Lemuria really existed or not, I do believe that Lemuria in particular influenced L Frank Baum in the shaping of his fairy tale land Oz.  Oz, in turn, has influenced many, including the writer’s of the TV show Lost.

Reading and writing and writing about reading are my passion. I've been keeping a journal since I was 14. I also write fiction and poetry. I published my first collection of short stories, "Radiant Darkness" in 2000. I followed that up with my first collection of poetry in 2001 called "Journey without a Map." In 2008, I published "Persephone's Echo" another collection of poetry. Since then I've also published Emotional Espionage, The Way The Story Ended, My Perfect Drug and Out There. I have my BA in English from The Ohio State University at Mansfield and my MA in English Lit from The University of North Carolina at Greensboro. I also have my Post BA Certificate in Women's Studies. I am the mother of two beautiful children. :-)
View all posts by carilynn27 →
This entry was posted in Literature/Pop Culture, Lost, Movies/TV and tagged America, Assyrian Exile, Atlantic, Atlantis, Australia, Ben Linus, California, Continent, Cyclone, Desert, Dorothy and the Wizard in Oz, Edgar Cayce, electromagnetic, Ev, Fairy Land, Heba, Hebrews, Henry Gale, Incas, India, Island, James Churchill, L Frank Baum, Lemuria, Lost, Madagascar, Madam Blatskvy, Magic, Mayans, Mexico, Mound Builders, Mu, New Mexico, Og, Oz, Ozma of Oz, Pacific, Phillip Sclater, San Fransisco, The Lost Tribes of Israel, The Mysterious Cities of Gold, Theosophy, Tornado. Bookmark the permalink.

2 Responses to Origins of Oz