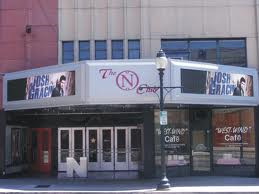 Last night Jason and I decided to go to a club here in Greensboro. I had rested all day and had enough energy to go and I’m glad we did.  We went to a club called Enigma, but all they were playing was Hip-Hop and Rap. We asked for our money back and left to find the N Club. The N Club is downtown and is a very cool place to be. The were playing better music—actual music.  Imagine that! The club was in what looked to be an old theater and had a pretty big dance floor.  Jason stood and watched as I joined the crowd of dancers.  Almost immediately two guys hit on me. The one told me I looked good and to keep dancing.  The other just started dancing with me, but I moved away from him after a moment or two.  Jason saw and just smiled at me.  The club was filled with mostly college kids and some people are age (late 20s).  There were some good-looking guys and women there.  Some of them were dancing quite well.  It was hard to tell at times if the women on the dance floor were friends or lovers as the bumped and grinded close to each other…

Then the song “Rapture” by Iio came on. The words go:

The night I laid eyes on you

I felt everything around me move

Got nervous when you looked my way

And your love moved right in

All this time, my love, where have you been?

My love, I want you so

You make my soul complete

I’m mesmerized in every way

You keep me in a state of daze

Always suffering in your heart

Lift our souls like a bird in the wind

I told Jason that as I danced I like I fell in a trance, like my body was moving on its own and I was in my own little world. I was feeling ecstasy and rapture as I saw the lights flash and heard the beat through my body.  Dancing with others is seen as sort of clothed sexual experience, but dancing alone can be pleasurable as well…

Later, they played Salt N Peppa’s “Push It.” I began to let myself go wild and push it every time they said to.  Perhaps I pushed it a little too much or a little too good—or maybe I was pushing it in my “I look easy, but I’m not” outfit.  (A short black skirt and black spaghetti strapped top.)  Whatever it was, it caused two guys to dance their way over to me.  One even began to bump and grind against me. Suddenly I felt his hips brush my rear end and his hands circled my waist.  More amused than offended, I gently pulled his hands away and moved off the dance floor.  It was time for a break anyway. I was tired and hot.

As the floor and the rest of the club became so crowded there was no room to move, I stayed close to Jason and just in my spot in front of him.  We were standing right near a bouncer, whom Jason claims was also checking me out.  As I continued to move, I thought about the past and how things have changed so much. I’ve really grown comfortable in my own skin at long last!

Reading and writing and writing about reading are my passion. I've been keeping a journal since I was 14. I also write fiction and poetry. I published my first collection of short stories, "Radiant Darkness" in 2000. I followed that up with my first collection of poetry in 2001 called "Journey without a Map." In 2008, I published "Persephone's Echo" another collection of poetry. Since then I've also published Emotional Espionage, The Way The Story Ended, My Perfect Drug and Out There. I have my BA in English from The Ohio State University at Mansfield and my MA in English Lit from The University of North Carolina at Greensboro. I also have my Post BA Certificate in Women's Studies. I am the mother of two beautiful children. :-)
View all posts by carilynn27 →
This entry was posted in Culture, Flashback, Music and tagged 2002, Cari Lynn Vaughn, Confidence, Dance, Dance Club, Enigma, Greensboro, Hip-Hop, Iio, Jason Vaughn, July, Mi Amore, North Carolina, Push It, Rap, Rapture, Salt N Peppa, The N Club. Bookmark the permalink.