The Motorcycle Accident And More

The Motorcycle Accident And More 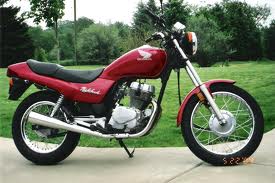 Back in August of 1999, Jason had a Honda Nighthawk motorcycle.  He liked to hang out a local bike shop, where he heard about group rides.  We went on one such group ride together on a hot summer day.  It was a wonderful ride until it came to a sudden halt for us.

We were over an hour away from home when we came upon a dangerous curve in the road.  Jason and I were near the back of the pack, so only one other person saw what happened next.  Jason started to lean into the curve and scraped the foot peg on the pavement.  This scared Jason and he overcorrected his lean.  This sent us off into an embankment.  When the motorcycle hit the embankment, we flew off of the bike—tumbling over one another until we came to rest in the nearby ditch.

Jason landed on top of me. Quickly he pulled himself off of me and checked to see if I was okay.  Our friend Will saw me lying still in the ditch and thought the worst.  Slowly, I sat up and pulled my helmet from my head.  I said, “I’m not dead.  I just had the wind knocked out of me there.”

It was then that Will and Jason noticed that there was a red stain on the back of my shirt.  At first they thought I was bleeding, but it turned out just to be some tomatoes that I landed on! Jason was the only one with any cuts.  The bike gave him a nasty scrape along his shin.  It was bleeding a little bit, but nothing to worry about.

We’d wrecked in front of a farm house, so we used their phone to call a friend with a truck to come pick us and the totaled bike up. There was nothing left to do but wait for help to arrive. Jason and I sat on the embankment beside the bike alone. The rest of the group had gone on ahead, oblivious to what had happened. Will took off on his bike once he knew we were alright and caught up to the group eventually. He then informed them of why we were no longer behind them.

I pulled long strands of grass up from the ditch and fashioning to grass dolls.  I made two so Jason could play with me, but his doll jumped off of his knee and committed suicide.  I laughed and said, “See if I ever play dolls with you again.  You’re no fun.”

A state trooper stopped by to see what had happened.  “Well, Christ on crutches!” he exclaimed when he heard our story.  He didn’t give Jason a ticket that day and for that we were very thankful.  The state trooper left when our friend, also named Jason, pulled up in his truck.  Jason and his friend Jason managed to get the wrecked bike into the truck bed and then we got in truck to ride nearly two hours to get home.

The truck had two bucket seats, and since I was the smallest of us three I was forced to sit in the uncomfortable middle space on top of the car phone.  When Jason turned on his truck, the phone gave a surprise ring.  I nearly jumped.  When I realized what it was, I said, “Oh! My ass is ringing!”  After a moment I smiled and added, “If we put the phone on vibrate then we’d be in business.”

Jason smiled and said, “Aw, you took my phone’s virginity.”
We had a good laugh and continued to talk and joke on the two hour drive home.  When we arrived at our apartment, I called my mom and told her that we’d been in an accident, but we were fine.

The bike was totaled, but Jason got a nice insurance payment out of it.  He purchased a newer, better bike with the money.  The wreck did not discourage him from ridding one bit.  I can say that it was a good thing we were wearing helmets though.  The front of my visor was scratched up pretty bad.  Had I not been wearing it, this pretty face wouldn’t be so pretty any more. 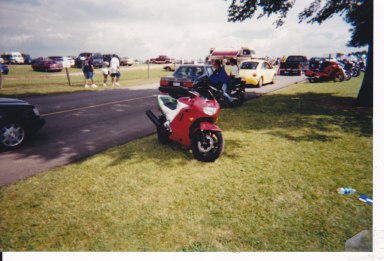 Jason’s second bike was stolen once we moved to North Carolina.  It was recovered several months later.  I had the brilliant idea of putting the bike on our balcony so no one would steal it again.  This might have been okay, except Jason got his finger caught in the wheel spoke as he drug it up two flights of stairs and the spoke pulled off his finger nail. Ouch!  Jason sold the bike a short time later.

The accident came back to haunt Jason in November of 2007.  He came down with a MERSA staph infection because of his scar.  He guesses that he must have gotten the staph under his fingernails while working on his dirty old Fiero.  Then he scratched his itchy scar and it bled.  A short time later his leg swelled and he had a fever of 104 degrees.  He was so sick that I was taking care of him even though I was eight months pregnant with Sebastian and supposed to be on bed rest. The night my water broke, he was too sick to drive me to the hospital, so I drove myself.

The plan was that Jason would sleep off the medication that he’d just taken and join me at the hospital in a few hours.  I checked in and found out Sebastian was breech and that they were going to do an emergency C-section.  I called Jason, but he was still sleeping.  By the time he made it to the hospital, I was in my room with our new baby boy Sebastian.  Jason came in briefly to see us, but the nurses wouldn’t let him hold his son.  He ended up down the ER, where he was admitted to the hospital himself.

I saw Jason late the following day with his IV in tow.  We hugged and talked.  The doctor told him that if he hadn’t seen a doctor when he did, that he could have died.  The thought of being such a young widow with two small children terrified me.  I was very thankful Jason was alive and going to be okay.  I was sent home with Sebastian just a little over two days after my c-section.  Jason stayed in the hospital on high-powered antibiotics for six days total.

Reading and writing and writing about reading are my passion. I've been keeping a journal since I was 14. I also write fiction and poetry. I published my first collection of short stories, "Radiant Darkness" in 2000. I followed that up with my first collection of poetry in 2001 called "Journey without a Map." In 2008, I published "Persephone's Echo" another collection of poetry. Since then I've also published Emotional Espionage, The Way The Story Ended, My Perfect Drug and Out There. I have my BA in English from The Ohio State University at Mansfield and my MA in English Lit from The University of North Carolina at Greensboro. I also have my Post BA Certificate in Women's Studies. I am the mother of two beautiful children. :-)
View all posts by carilynn27 →
This entry was posted in Event, Flashback and tagged 1999, 2007, Accident, Bike Ride, C-Section, Cari Gilkison, Cari Vaughn, CBR, Celluitis, Christ on Crutches, Country, Curve, Ditch, Enbankment, ER, Farm House, Fiero, Grass Doll, Greensboro, Helmets, Honda, Hot Summer Day, Infection, Jason Vaughn, Labor, Local Bike Shop, Med Central, MERSA, Nail, Nighthawk, Ninja, North Carolina, Phone, Ride Home, Scrape, Scratch, Sebastian Vaughn, Sportbike, Stolen, Tomatoes, Totaled, Visor, Wind Knocked Out, Wound. Bookmark the permalink.