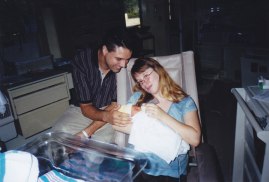 I waited restlessly for Jason to arrive.  It didn’t take long, but it felt like forever.  I was seated next to a woman who had apparently just started having contractions and not in that much pain just yet.  She was talking my ear off, and it was irritating.  I wanted nothing more to find a nice quiet place to have my baby in peace.  I was in too much pain to pay attention to a story about her life or anyone’s for that matter.

The hospital doors whooshed open and there was Jason and Brad.  They greeted me and Brad left to go back to work.  I updated Jason and we then used Brad’s calling card to inform our parents in Ohio about the news.  As we were saying goodbye to my Mom, a nurse came out with a wheelchair for me. 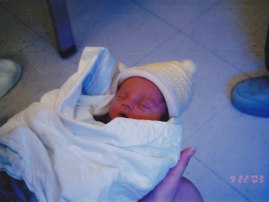 The birthing suite they wheeled me to was pretty large, with a chair and couch in it for visitors.  There was also a bathroom with a nice bathtub as well.  They had me change into a gown and then they hooked me up to the monitors.  Soon after, the doctor on call came in to check on me.  I was 3 centimeters at the doctors and had progressed to about 4 centimeters.  The pain grew increasingly intense and my back was killing me.  They offered some natural relief via sterile water injections.  Ouch!  The injections hurt worse than the contractions.  I decided against ever doing that again.

I tried the bathtub after that and that seemed to do me some good.  Jason held the removable showerhead over my back and I sat in the warm water.  I could have spent the rest of my labor in the tub, but feeling like a prune, I finally got out and dried off. 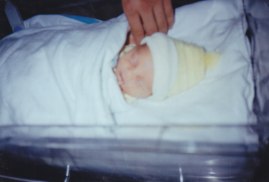 Brad had called his mother from work to tell her the news.  His mother then called the hospital to check on me.  She asked if she could come be at the hospital when it was time.  Since my mother and Jason’s mother were not able to make it in time, I said sure.  Faye came by a short time later.  Jason had talked about hiring me a Douala.  A Douala is a mother to the mother, providing support in addition to the coach or family members.  Jason was afraid he wouldn’t be support enough.  I told him appreciated the thought, but that we couldn’t afford a Douala.  When Faye arrived, we dubbed her our free Douala because she offered a great deal of support.

The doctor checked my progress several times.  I dilated to five centimeters and stalled there for several hours.  Some women vow to go completely drug free and natural, while others beg for drugs as soon as they walk in the door.  I had decided to leave my options open.  If the labor had progressed more quickly or if I could have been sure that labor would only last a few more hours, I might have gone drug free.  I was tired of the intense back labor and feared being too tired to push.  The nurses gave me a mild sedative, which allowed me to rest for a while and I opted for the epidural, which came a little later.  I am thankful I did. 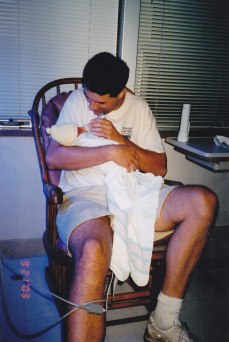 Jason was afraid that I would turn into a complete bitch during labor and start cussing at him.  I never did.  Once I had the drugs I was even feeling up to cracking jokes.  I commented that my daughter was already a pain in the ass.  When the told me that my sphincter muscles weren’t relaxing enough to push her through, I commented that I always knew I was a tight ass!  I was in good spirits despite being in pain and tired.  The nurses all said I was, “A good little laborer.”  I thought that probably say that to everyone, but it still made me feel good.

The on-call doctor went off duty and the midwife came on duty sometime in the early evening.  She introduced herself while I was up in the stirrups.  I felt odd meeting someone while showing all that God gave me, but that is the nature of birth.  You just don’t care as much.  Dignity and modesty go out the window.

At 6:30 pm, I was finally dilated the full ten centimeters. This is when the room began to fill up.  It was a teaching hospital, which meant interns were called in to watch and to help.  The epidural wore off as I began to push.  I pushed and I pushed. 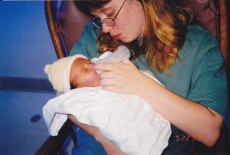 It was after 7pm when the nurse told me between contractions to reach down and feel her head.  I reached between my legs and felt my daughter’s full head of hair.  It was the most surreal experience I’ve ever had.  Shortly after that, I gave the final push and it stung like hell.  I let out a primal scream as she made her entrance into the world.

The doctors did their thing and then handed her to me briefly. She looked into my eyes tiredly, but didn’t cry.  Before I could get a chance to really enjoy her, the doctor’s hand her to Jason and had him take her down to the nursery. 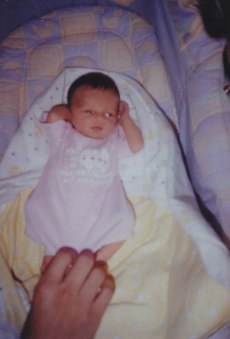 Reading and writing and writing about reading are my passion. I've been keeping a journal since I was 14. I also write fiction and poetry. I published my first collection of short stories, "Radiant Darkness" in 2000. I followed that up with my first collection of poetry in 2001 called "Journey without a Map." In 2008, I published "Persephone's Echo" another collection of poetry. Since then I've also published Emotional Espionage, The Way The Story Ended, My Perfect Drug and Out There. I have my BA in English from The Ohio State University at Mansfield and my MA in English Lit from The University of North Carolina at Greensboro. I also have my Post BA Certificate in Women's Studies. I am the mother of two beautiful children. :-)
View all posts by carilynn27 →
This entry was posted in Biology, Feminism, Flashback and tagged Anastasia Taylor Vaughn, Baby, Back Labor, Bath, Birth, Born, Brad Warren, Cari Lynn Vaughn, Contractions, Crying, Delivery, Dialated, DIgnity, Doctor, Don't Care, Doula, Early Labor, Epidural, Faye Warren, Greensboro, Jason Vaughn, Meds, Midwife, Modesty, Mom, Mother, Mother in Law, North Carolina, Pain, Preemie, Pregnancy, Primal Scream, Pushing, Stirrups, Teaching Hospital, Water Broke, Women's Hospital. Bookmark the permalink.