“Eternal Vigilance is the Price of Liberty,” is often attributed to Thomas Jefferson. However, it was John Philpot who first said, “The condition upon which God hath given liberty to man is eternal vigilance, which if he breaks, servitude is at once the consequence and the punishment of his guilt.”

I first heard the quote not in history class, but on Person of Interest. There is a group called Vigilance who seeks to take down the surveillance system in place. I might agree with them, except that the program has become a form of artificial intelligent who protects us. Destroying it would be destroying a life form.

Person of Interest shows that technology itself is not evil. It all depends on who is using it and why. Finch and Reese were using the system for good. Vigilance, however, does not see or does not care rather the system is used for vigilante justice or not. They have become the villains despite their good intentions. And that is irony.

Is it just me or is J.J. Abrams giving a shout out to his other show Revolution with the “Vigilance” quote? Just a thought.  But the electric grid going down and the politics of it all does cover some of the same ground even without the reference to the American Revolution. I mean isn’t the mass surveillance machine similar to the nanobots in that both are Artificial Intelligence? Perhaps Person of Interest is the prequel to Revolution. 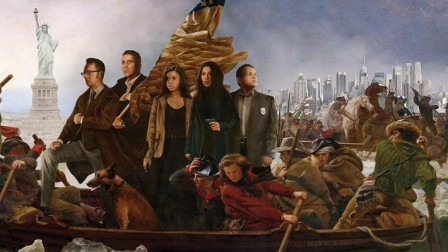 “You are being watched. The government has a secret system: a machine that spies on you every hour of every day. I know, because I built it. I designed the machine to detect acts of terror, but it sees everything. Violent crimes involving ordinary people; people like you. Crimes the government considered ‘irrelevant’. They wouldn’t act, so I decided I would. But I needed a partner, someone with the skills to intervene. Hunted by the authorities, we work in secret. You’ll never find us, but victim or perpetrator, if your number’s up… we’ll find you”  ~Season one opening voice-over by Mr. Finch

Reading and writing and writing about reading are my passion. I've been keeping a journal since I was 14. I also write fiction and poetry. I published my first collection of short stories, "Radiant Darkness" in 2000. I followed that up with my first collection of poetry in 2001 called "Journey without a Map." In 2008, I published "Persephone's Echo" another collection of poetry. Since then I've also published Emotional Espionage, The Way The Story Ended, My Perfect Drug and Out There. I have my BA in English from The Ohio State University at Mansfield and my MA in English Lit from The University of North Carolina at Greensboro. I also have my Post BA Certificate in Women's Studies. I am the mother of two beautiful children. :-)
View all posts by carilynn27 →
This entry was posted in History, Literature/Pop Culture, Movies/TV, Politics/Economics and tagged Act of Terror, AI, American Revolution, Artifical Intellegence, Crimes, Eternal Vigilance is the Price of Liberty, Evil, Finch, Founding Fathers, God, Good, Government, Intervene, Irony, Irrelevant, J.J. Abrams, John Phlipot, Nanobots, New York City, Number, Person of Interest, Prequel, Reese, Relevant, Revolution, Skills, Survillance System, The Machine, Thoma Jefferson, Vigilance, Vigilante Justice, Villans. Bookmark the permalink.