George Lucas came to my attention in 1988. That was the year that I saw Willow. I knew of him from Star Wars. Although I liked Star Wars, it hadn’t captured my imagination like Willow did. Star Wars was more of my cousin’s obsession. When my mother babysat for them in 1986, they had Star Wars sheets, all the actions figures and watched the movies frequently.

I couldn’t quite explain my draw to George Lucas, except that he felt like a kindred spirit. The idea of the force intrigued me and it seemed we had similar spiritual views. I liked his strong female characters like Leia and Sorsha. I read about his life (Skywalking) and decided to reach out to him. I was only 12 at the time, so I couldn’t quite express myself as clearly as I would have liked.

I received a form response from Lucasfilm Ltd. Frustrated, I sent another letter. This time I sent a poem about the “Elven Rings,” which he’d referenced in Willow. I’d recently read The Lord of the Rings and was trying to show that I knew Willow was heavily influence by The Lord of the Rings. However, the Security at Lucasfilm perceived this as a problem. One day I received a call from said Security. They inquired about my interest in Lucas and politely asked me to stop bothering him. I got a Skywalker Ranch T-Shirt for my trouble. 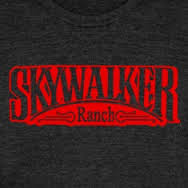 I didn’t write him again and felt sorely misunderstood. As a child I felt alienated from my peers. In my small Midwestern town, I never found anyone who had an interest in Buddhism, Magic or Philosophy. No one I knew shared my love of archery, horses, swords and druids. Lucas was the perfect person to connect to and even mentor me. He was very much the father figure I was missing in my life at the time.

When I got older, I eventually found people with similar interests, but Lucas has always remained someone of interest to me. One of my friends called him Uncle Lucas with the same sort familiarity and affection I felt toward him. It was good to know I wasn’t the only one who considered him family!

In any case, his other blockbuster series Indiana Jones was also a huge influence on me as well. For a time I actually considered becoming an archeologist myself! Raiders of the Lost Ark and The Last Crusade were my favorites. Young Indiana Jones, which aired on TV, was fun to watch. While I liked The Kingdom of the Crystal Skull, it didn’t have the same feel as the originally trilogy.

Eventually, Lucas re-released Star Wars and then went back to writing new episodes. While I appreciated the back story, it did feel like the material should have spanned just two movies instead of three. Stretching it into a trilogy harmed it in the long run. Interestingly, the opposite was true for Willow. I think it should have been two movies, not one. Anyway, I understood the uproar over the newer slicker digital Star Wars. Though it was a prequel, it looked more futuristic. I know Lucas was trying to make the movies he originally envisioned, but didn’t have the technology to produce, but many fans saw this as a betrayal.

While the themes behind Star Wars were just as strong as the first, I believe that Lucas got distracted by his perfectionism. Tinkering and toying with the older movies and trying to improve upon his classic caused him to lose many fans. I remain loyal, but that doesn’t mean I don’t have objections.

I was surprised when he sold Star Wars to Disney, but I think it was a good move. I look forward to seeing what J.J. Abrams, a long time Star Wars fan, will bring to the series. I know that there is substantial number of books written in the saga that take place after Episode VI, but that Abrams is not directly drawing from them for his new movie. I am excited to see Mark Hamill, Carrie Fisher and Harrison Ford return to the series though!

Reading and writing and writing about reading are my passion. I've been keeping a journal since I was 14. I also write fiction and poetry. I published my first collection of short stories, "Radiant Darkness" in 2000. I followed that up with my first collection of poetry in 2001 called "Journey without a Map." In 2008, I published "Persephone's Echo" another collection of poetry. Since then I've also published Emotional Espionage, The Way The Story Ended, My Perfect Drug and Out There. I have my BA in English from The Ohio State University at Mansfield and my MA in English Lit from The University of North Carolina at Greensboro. I also have my Post BA Certificate in Women's Studies. I am the mother of two beautiful children. :-)
View all posts by carilynn27 →
This entry was posted in Culture, Flashback, Literature/Pop Culture, Movies/TV and tagged 1988, Biography, Carrie Fisher, Digital, Disney, Elven Rings, Family, Fans, Father Figure, Futuristic, George Lucas, Harrison Ford, Indiana Jones, J.J. Abrams, Jean Marsh, Kingdom of the Crystal Skull, Last Crusade, Leia, Lord of The Rings, Lucasfilm Ltd, Mark Hamill, Sean Patrick Flannery, Security, Skywalker Ranch, Skywalking, Slicker, Sorsha, Star Wars, Strong Women, Uncle George, Val Kilmer, Vision, Warrick Davis. Joanne Whalley, Willow, Young Indiana Jones Chronicles. Bookmark the permalink.