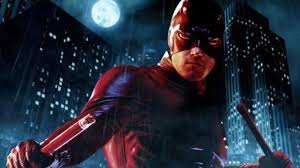 Ben Affleck played Matt Damon’s best friend in Good Will Hunting. Despite him taking the smaller role in the script they both wrote, I still noticed him. For some reason I didn’t really notice him in Dazed and Confused, perhaps because despite his good looks, he played total creep. 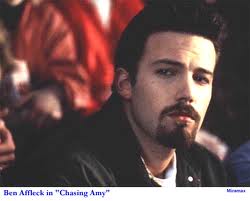 I was already a fan of Kevin Smith after I saw Clerks. When I saw Chasing Amy, I both admired Smith’s writing and Affleck’s acting. So when Dogma came out, I had to see that too! Being a Shakespeare fan, I had to see Shakespeare in Love, which Affleck was also in. And when Armageddon came out on DVD I watched that as well. The movie itself was a bit too cliched, but still interesting enough to watch. I had no idea that its writer and director J.J. Abrams would become one of my favorite creators and that Affleck would become one of my favorite actors at the time though….

Later he went on to do Bounce with his ex-girlfriend Gwenth Paltrow. Man, what is it about Gwenth? First Brad Pitt and then Ben Affleck? She keep snagging some of the biggest names in Hollywood. Anyway, they broke up before the movie and got back together briefly after it. They broke up for good a short time after the movie came out. 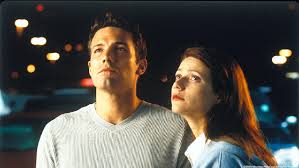 He stared in Pearl Harbor, which is where he met his wife Jennifer Garner. Only she was married at the time. They might have had some chemistry then, but it seems as if nothing happened. Three years later they met up again in the movie Daredevil. She kicked his ass and he fell in love with her. Now that is what I call romance. 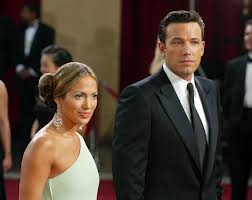 Ben Affleck had previously been involved with Jennifer Lopez, whom he met on the set of Gigi. Despite being constantly in the headlines, their chemistry fizzled on screen. In real life they got engaged, but soon called it off. Meanwhile, Garner was involved with her co-star Michael Vartan. She quickly broke it off with him and before you know it the tabloids were covering Jennifer’s pregnancy. 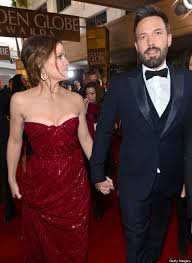 Ben and Jen married in a private ceremony. Since then they have three kids with a fourth one possibly on the way. Since then Affleck seemed to be picking better movies to star in. The Town is one of my favorites. It takes place in Boston and is gritty. Despite being a criminal, Affleck is still the hero of he movie. You really root for him because you see the good guy amid the bad deeds and that ain’t easy to pull off. Kudos for that and for mentioning CSI and Bones!

Eventually he tried his hand at directing with Gone Baby Gone and then Argo and Live By Night. He won awards for Argo. He hasn’t given up directing, but he took a break to portray Nick Dunne in Gone Girl and Batman in Batman Vs Superman. Fans weren’t too sure about him as Batman. Despite his role as Daredevil, many felt he just didn’t fit the bill. I am waiting until I see the movie to actually decide.

My draw to this Daredevil is a bit of a mystery to me. I find him popping up in dreams now and again. Usually it is with his wife Jennifer Garner. In fact, I had a premonition that she was pregnant, that is was unplanned and wasn’t Michael Vartan’s. Since then we casually flirt and are affectionate with one another whenever he appears in my dreams. I’d love to meet him and see if that relationship would echo the one in my dreams or not.

When I heard Affleck had been kicked out of a casino in Las Vegas for counting cards I wondered if he might find a quieter place to play poker—like Black Hawk, Colorado—where I work. But so far I haven’t seen him there. One can hope though! One can hope.

Reading and writing and writing about reading are my passion. I've been keeping a journal since I was 14. I also write fiction and poetry. I published my first collection of short stories, "Radiant Darkness" in 2000. I followed that up with my first collection of poetry in 2001 called "Journey without a Map." In 2008, I published "Persephone's Echo" another collection of poetry. Since then I've also published Emotional Espionage, The Way The Story Ended, My Perfect Drug and Out There. I have my BA in English from The Ohio State University at Mansfield and my MA in English Lit from The University of North Carolina at Greensboro. I also have my Post BA Certificate in Women's Studies. I am the mother of two beautiful children. :-)
View all posts by carilynn27 →
This entry was posted in Dreams, Literature/Pop Culture, Movies/TV and tagged Affectionate, Argo, Armageddon, Batman, Ben Affleck, Benifer, Black Hawk, Boston, Bounce, Brad Pitt, Casino, Chasing Amy, Chemistry, Cleark, Colorado, Counting Cards, Daredevil, Dazed and Confused, Directing, Director, Dogma, Draw, Dreams, DVD, Engaged, Flirting, George Clooney, Gigi, Gone Baby Gone, Gone Girl, Good Will Hunting, Gritty, Gwenth Paltrow, J.J. Abrams, Jay and Silent Bob Strike Back, Jennifer Garner, Jennifer Lopez, Kevin Smith, Kick-Ass, Kids, Las Vegas, Mallrats, Married, Matt Damon, Nick Dunne, Oscar, Pearl Harbor, Poker, Pregnacy, Premonition, relationship, Script, Shakespeare in Love, Superman VS Batman, Tabloids, The Town, Writer. Bookmark the permalink.