Natalie Portman’s first film was The Professional and it was the first film I saw her in. Though only 13 at the time, I was floored by her performance. I liked her as the wise beyond her years girl in Beautiful Girls as well. But it was Star Wars: The Phantom Menace that launched her career as a mega-star. She looked a little like a young Carrie Fisher. Her poise and dignity made her a perfect Queen while her rebellious side made her a perfect passenger Padame.

She grew from a teenager to a young before our eyes in Anywhere But Here and Where The Heart Is. When she reappeared in Star Wars: Attack of the Clones, she was a beautiful young woman ready for romance and adventure. Admittedly she and Hayden Christenson and Natalie Portman didn’t sizzle on screen as one would hope, but I still enjoyed her performance. 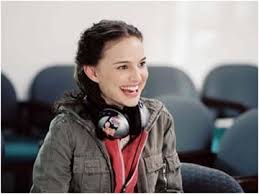 Portman continued to choose independent and intense roles in movies like Garden State, Closer and V For Vendetta. The roles just coming and she kept hitting them out of the park. The girl who refused to do a love scene as a young teen in Anywhere But Here was now portraying a heartbroken stripper in Closer. She was bold and bratty as Anne Boleyn in The Other Boleyn Girl and convincingly conflicted in The Other Woman. Her dark, driven side in The Black Swan earned her many accolades in 2010.

Then she switched it up and stared with Ashton Kutcher in the romantic comedy No Strings Attached. Portman is originally from Israel and strongly identifies with her Jewish heritage, but it was Kutcher that taught her the most about Judaism and the Kabbala. Then she went on to star in Thor and Thor The Dark World with Liam Helmsworth. As one of the few females in the comic book adaptation, she is refreshingly intelligent as an astrophysicist.

Natalie Portman is very intelligent, which I greatly admire. In fact, she want to Harvard and got a degree in Psychology. Most recently she got married and had a baby! Her son was born in 2011. We tend to forget that she was a teen star since she avoided all the common pitfalls of the profession. She never went out and partied or got in trouble with the law. She worked steadily through her teen years and made the transition to adult lead actress with ease and grace. Even if she hadn’t become a star, she would have found success in her life I imagine.

Reading and writing and writing about reading are my passion. I've been keeping a journal since I was 14. I also write fiction and poetry. I published my first collection of short stories, "Radiant Darkness" in 2000. I followed that up with my first collection of poetry in 2001 called "Journey without a Map." In 2008, I published "Persephone's Echo" another collection of poetry. Since then I've also published Emotional Espionage, The Way The Story Ended, My Perfect Drug and Out There. I have my BA in English from The Ohio State University at Mansfield and my MA in English Lit from The University of North Carolina at Greensboro. I also have my Post BA Certificate in Women's Studies. I am the mother of two beautiful children. :-)
View all posts by carilynn27 →
This entry was posted in Literature/Pop Culture, Movies/TV and tagged Aleph, Anne Boleyn, Anywhere But Here, Ashton Kutcher, Astrophysicist, Attack of the Clones, Closer, Dark, Driven, Friends, George Lucas, Harvard, Judaism, Kabbalah, Married, Mother, No Strings Attached, Phantom Menace, Psychology, Revenge of the Sith, Star Wars, Stripper, The Black Swan, The Dark World, The Garden State, The Other Boleyn Girl, The Other Woman, The Professional, Thor, V For Vendetta, Where the Heart Is. Bookmark the permalink.