I first saw Rufus Sewell in the Science Fiction film Dark City. He was dark, mysterious, brooding and yet sympathetic. I not seen him in anything before and his Byronic good looks piqued my interest. The English actor had been in a few things in the early 90s, but nothing I’d seen. When he appeared in Dangerous Beauty, I fell in love with him. 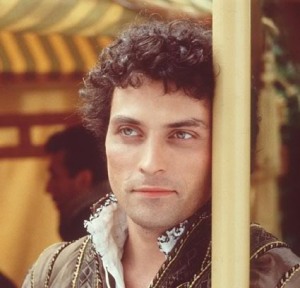 Dangerous Beauty was based on the real life poet and courtesan Veronica Franco. I read the nonfiction academic book The Honest Courtesan that inspired the movie and read Franco’s poetry and letters. Sewell played Veronica Franco’s lover Marco Venier. He was excellent as the romantic lead. More than that he looked a lot like a guy I knew that I had feelings for…..

Sewell went on to make many more movies, but I’ve only been able to catch a handful of them. Some are smaller British productions that are hard to find in the US. I did catch the movie The Very Thought of You. Then he went onto play villains in A Knight’s Tale with Heath Ledger and Bless the Child with Christina Ricci. He wasn’t exactly the hero in the 2006 movie Tristan and Isolde either, but it was still good to see him. He played a good guy in the miniseries Pillars of the Earth, but went back to role of villain in Abraham Lincoln Vampire Slayer.

I was excited to see him in his own TV series called The Eleventh Hour, but was canceled after just 18 episodes. It looked like a good enough show, but it was on late and on at the same time as a lot of other shows that I enjoyed watching, so I didn’t catch all 18 episodes.

He has had guest roles on TV and roles in movies since then, but I haven’t been able to see them since they are primarily British. I do hope he does more American films and I really hope that plays another romantic lead. 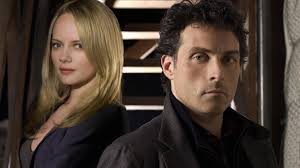 I know he started playing villains so as not to be type-casted. Sex symbol was not a label he was comfortable with, but then he ended up being type cast as the bad guy instead. Despite being completely convincing as an asshole, I still like something about him. He is intelligent, sexy and a bit rough around the edges and get the feeling he’d be far from boring to hang around!

Reading and writing and writing about reading are my passion. I've been keeping a journal since I was 14. I also write fiction and poetry. I published my first collection of short stories, "Radiant Darkness" in 2000. I followed that up with my first collection of poetry in 2001 called "Journey without a Map." In 2008, I published "Persephone's Echo" another collection of poetry. Since then I've also published Emotional Espionage, The Way The Story Ended, My Perfect Drug and Out There. I have my BA in English from The Ohio State University at Mansfield and my MA in English Lit from The University of North Carolina at Greensboro. I also have my Post BA Certificate in Women's Studies. I am the mother of two beautiful children. :-)
View all posts by carilynn27 →
This entry was posted in Literature/Pop Culture, Movies/TV and tagged A Knight's Tale, Abraham Lincoln Vampire Slayer, Anger, Asshole, Bady, Bless The Child, Cameron Diaz, Christina Ricci, Dangerous Beauty, Dark City, Dark Edge, Downloading Nancy, Heath Ledger, Italy, Jack Black, Kate Winslet, Lovers, Marco Venier, Middlemarch, Pillars of the Earth, Rufus Sewell, The Eleventh Hour, The Holiday, The Very Thought of You, Tristan and Isolde, Type Cast, Venice, Veronica Franco, Villain. Bookmark the permalink.