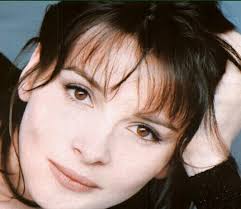 Juliette Binoche is a French actress who first came to my attention in The English Patient. After seeing her that in 1996, I went back and watched her earlier films. I was excited to see that she and English Patient co-star Ralph Finnes acted together in the 1992 version of Wuthering Heights. 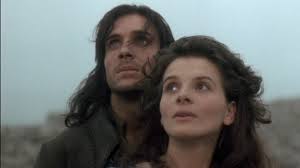 I had read both Wuthering Heights and The English Patient for a Film class I took at OSU. We read books and compared them to the movies. However, for Wuthering Heights we watched the 1939 version with Lawrence Oliver. That 1939 movie left out half the book, but the 1992 version included a lot the original left out. The original made Heathcliff out to be better than he was in the books. It made the story more happily ever-after than it was. The book portrayed Heathcliff a lot darker and more abusive than Hollywood was comfortable with at the time. The 1992 didn’t balk at letting Heathcliff be the bad guy that he was. His darkness made the role of Kathy much deeper and more complicated.

Juliette Binoche was luminous in her role as the sweet but sad Cathy, which makes sense since she was Tereza in The Unbearable Lightness of Being. I read the 1984 novel in 1999 and then went back and watched the 1988 movie. Both the book and the movie were good, but Binoche really stood out in her performance. There is just something about her that is unpretentious her, which made her perfect for the young and innocent Tereza.

Then I stumbled upon the book and movie Damage, which also came out in 1992. She was raw and vulnerable Ann Barton. Not many actresses could pull off the quiet desperation and pain that Binoche does in the role. The film wasn’t a huge success, but it is worth seeing just for her. Well, her and Jeremy Irons! 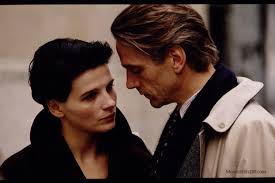 Later I saw her in Choclat. She teamed back with her Unbearable Lightness of Being co-star Lena Olin for this 2000 romantic film. It was a charming movie and quite enjoyable to watch. Johnny Depp and Juliette Binoche make a good couple on screen. 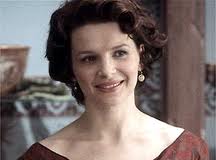 Though she has made many movies since then, I have only seen the 2006 movie Breaking and Entering with Jude Law. She is just as charming as ever as the immigrant seamstress Amira Simić. I really enjoy Binoche’s work and didn’t realize just how many movies she’s been in until I looked her up on Wikipedia. Since many of her films are British or French, we don’t always here about them here in the USA. But now that I know the titles, I will do my best to go back and watch them.

Juliette herself would never go back. In fact she was quoted as saying, “”I don’t look back on the past because I like to live in the present. I know this makes some people think I probably never cared, but I need my freedom and I like to keep moving.” And perhaps it is just this carefree, living in the moment attitude that I like most about her. 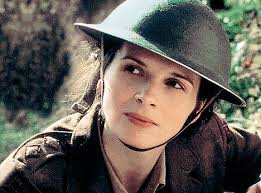 Reading and writing and writing about reading are my passion. I've been keeping a journal since I was 14. I also write fiction and poetry. I published my first collection of short stories, "Radiant Darkness" in 2000. I followed that up with my first collection of poetry in 2001 called "Journey without a Map." In 2008, I published "Persephone's Echo" another collection of poetry. Since then I've also published Emotional Espionage, The Way The Story Ended, My Perfect Drug and Out There. I have my BA in English from The Ohio State University at Mansfield and my MA in English Lit from The University of North Carolina at Greensboro. I also have my Post BA Certificate in Women's Studies. I am the mother of two beautiful children. :-)
View all posts by carilynn27 →
This entry was posted in Literature/Pop Culture, Movies/TV and tagged 1939, 1992, 1996, 2000, 2006, American, Amira Simić, Anthony Mingella, Breaking and Entering, British, Cathy, Charming, Chocolat, Damage, Dark, French, Hanna, happy, Heathcliff, Immigrant, Innocent, Jeremy Irons, Johnny Depp, Josephine Hart, Jude Law, Juliette Binoche, Lena Olin, Michael Ondaatje, Quiet Desperation, Ralph Finnes, Raw, Seamstress, Silent Pain, Terza, The Unbearable Lightness of Being, Unpretentious, USA, Vulnerable, Wuthering Heights, Young. Bookmark the permalink.