Moral Molasses is the title of a blog on The Walking Dead by Steven Scholzman in 2011. Though it was primarily about Season 2, it still holds true for Season 4. Perhaps more so. He asserts that Zombies are Walking Metaphors for Sticky Situations and I concur. One of the things I like most about The Walking Dead is the complexity of the characters. On the surface it might seem like the mindless gore of killing zombies is the only thing show is about, but it is not. Truthfully, it is about the difficulties of living in a Post-Apocalyptic world. It is a brutal place, but survival is what the show is all about. Take away the government and social structure and see what moral dilemmas come up. 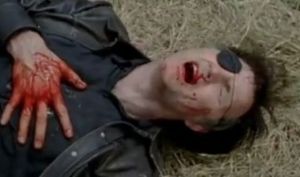 Season 4 begins in the prison. It seems like the group might have finally achieved some stability. Then a deadly swine flu hits and soon all hell breaks loose. Just as they are recovering from that, the Governor shows up again to attack. Sure, he is killed, but not before killing Hershel and causing the prison to be overrun by zombies. Everyone splits up but eventually congregates at Terminus. It is supposed to be a sanctuary, but turns out to be a terrible place. 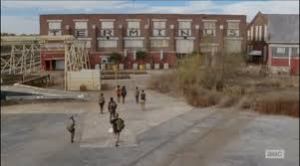 During all of this, we see Rick struggling with what Carol did. She killed the 1st two members of the group that got sick. She reasoned it was for the good of the group, but Rick felt it was a reckless decision more akin to murder than mercy and he exiled her for it.
Later Carol reconnects with Tyrese, Lizzie, Mika and baby Judith. She discovers that Lizzie had been feeding rat to the Walkers and that she cried when her “pet” or “friend” zombie was killed. Lizzie sees the zombies as still human. They may look and act different, but she clings to the notion that the personality or person is still alive in there. And maybe there is a soul locked inside, but its murderous, flesh eating impulses make it a threat.

Convinced that death is not end, but a new beginning, Lizzie kills her younger sister Mika. When Carol and Tyrese see what she’s done they are mortified, shocked and saddened. Despite the dozens of zombie deaths each episode, the show still has the ability to expose the real horrors of humanity. Lizzie’s lack of compassion for her family and twisted way of thinking made her a danger to society. Carol had tried to talk some some sense into her, but obviously it didn’t change anything. With a heavy heart, Carol kills Lizzie and leaves their homestead in The Grove.

Others have mistaken Zombies for humans and paid the price. Hershel was convinced that they were merely sick and that they would find a cure, but eventually Shane showed him otherwise. The Governor clung to his Zombie daughter Penny until she was permanently put down. His inability to accept her loss seemed to fuel his monstrous behavior. He became delusional and psychotic. Somehow his attachment to a non-human made it easier to kill his fellow human beings. The ability to draw a clear boundary between self-defense and murder is a vital one in The Walking Dead. The world is a dangerous place, but turning on each other instead of working together has disastrous results.

Reading and writing and writing about reading are my passion. I've been keeping a journal since I was 14. I also write fiction and poetry. I published my first collection of short stories, "Radiant Darkness" in 2000. I followed that up with my first collection of poetry in 2001 called "Journey without a Map." In 2008, I published "Persephone's Echo" another collection of poetry. Since then I've also published Emotional Espionage, The Way The Story Ended, My Perfect Drug and Out There. I have my BA in English from The Ohio State University at Mansfield and my MA in English Lit from The University of North Carolina at Greensboro. I also have my Post BA Certificate in Women's Studies. I am the mother of two beautiful children. :-)
View all posts by carilynn27 →
This entry was posted in Literature/Pop Culture, Movies/TV and tagged 2011, 2012, 2013, 2014, Baby Judith, Blog, Boundaries, Brian Blake, Brutal Place, Carol, Carol Exiled, Carol Killed Lizzie, Danger to Society, dangerous, Dead, Death, Delusional, Disaster, Find A Cure, Flesh Eating Impulses, Friend Zombie, Gore, Hershel, Human, Human Beings, Humanity, illness, Kill, Killing, Lizzie, Lizzie Killed Mika, Metaphor, Monstrous Behavior, Murder, Non-Human, Penny Blake, Person, Personality, Pet Zombie, Prison, Psychotic, Rick, Sanctuary, Season 2, Season 4, Self-Defense, Soul, Soulless, Steven Scholzman, Sticky Situations, Swine Flu, Terminus, The Governor, The Walking Dead, Turn On Each Other, Undead, walkers, Walking Metaphor, Work Together, Zombie. Bookmark the permalink.