Orange is the New Black

Orange is the New Black 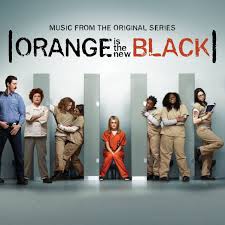 This week has been a grimm week in prison. First we watched Orange is the New Black and then Season 3 of Grimm. Though the completely different shows, the two do share a certain black humor. I’d heard good reviews of the Netflix Series, but didn’t know much about until I picked up the Orange is the New Black book from the library. 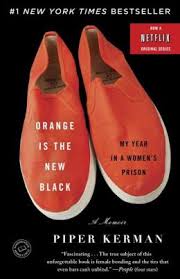 The book is a memoir by Piper Kerman. And it came out in 2010. The series didn’t start until 2012 though. It chronicles Piper’s 13 month stay in a Women’s Federal Prison due to the mistake of bringing drug money into the US. Piper was just out of college and aching for adventure. Her girlfriend got her involved with an international drug cartel back in the 1990s. Piper realized that life wasn’t for her and got out fairly quickly. She put her past behind her and moved on with a new boyfriend and a new life, only to have the past pop up again nearly 10yrs later and bite her in the ass. 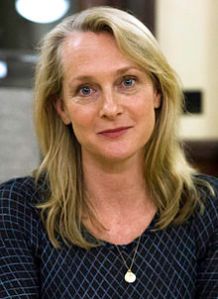 Though I’ve never been to prison, Piper as a fish out of water is relate-able. The various characters she meets and even becomes friends with are interesting. Women, even behind bars, create communities. Men tend to be more self-reliant. They create networks and alliances to survive, but don’t seem to form the bonds that women do. Despite the differences between men and women’s prisons, I find myself constantly reminded of Ben while I watch Orange is the New Black.

I received calls announcing that a prisoner is calling me—collect. I’ve had to deal with the delays in sending and receiving mail to prison. I’ve been frustrated by the lack of credit to the commissary or lack of necessary items stocked—i.e paper or envelopes. I’ve visited Ben in prison and hugged him under the watchful eye of the guards. I’ve not personally been locked away, but I do have some experience with the prison system.

.
And Piper is right—it punishes without proper rehabilitation or preparation for the re-entering of the outside world. The system needs reformed—especially when minor offenses land people in prison for ridiculously long sentences.

The so-called War on Drugs was a waste of everyone’s time and money. Because of the zero-tolerance policy that was implemented, the prisons here in the US imprisons more people than any other country in the world. How ironic is that when the word America is synonymous with the word freedom when we are the least free in the world—or at least have the least free amount of people? 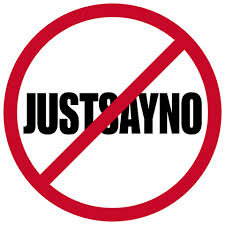 Law makers seemed to forget the most basic principle of of supply and demand where it came to drugs. So long as there is a demand for drugs, there will always be a supply. You can never hope to eradicate drug use until you can find a way to eradicate the need for them. Getting rid of drugs would mean getting rid of the desire for them. And the only way to do that is to educate. Just Say No will never be enough. Having the tools to cope with life and deal with emotional pain is a good way to start. Society must not toss aside the undesirables. Everyone must feel valued and have a job to do. Everyone must have a voice and have their needs taken care of. People use, abuse, buy and sell drugs because their options are often limited or because it is easier than jumping through bureaucratic hoops. It is a dependance borne out of self-reliance. It is the Catch-22 of a Capitalistic Society.

Reading and writing and writing about reading are my passion. I've been keeping a journal since I was 14. I also write fiction and poetry. I published my first collection of short stories, "Radiant Darkness" in 2000. I followed that up with my first collection of poetry in 2001 called "Journey without a Map." In 2008, I published "Persephone's Echo" another collection of poetry. Since then I've also published Emotional Espionage, The Way The Story Ended, My Perfect Drug and Out There. I have my BA in English from The Ohio State University at Mansfield and my MA in English Lit from The University of North Carolina at Greensboro. I also have my Post BA Certificate in Women's Studies. I am the mother of two beautiful children. :-)
View all posts by carilynn27 →
This entry was posted in Feminism, Literature/Pop Culture, Movies/TV, Politics/Economics and tagged 13 Month Sentence, 15 Month Sentence, 1990s, 2010, 2012, 2013, 2014, Alliances, America, Benjimin Something, Bonding, Bonds, Boyfriend, Bureaucratic Hoops, Buy and Sell Drugs, Capitalism, Captialistic Society, Catch-22, Collect Calls, Commissary, community, Dependance, Drug Money, Drug Use and Abuse, DVD, Educate, education, envelopes, Everyone Has a Job, Everyone Has A Voice, Fiancee, Free, Freedom, Girlfriend, Guards, Hug, International Drug Cartel, Ironic, Jail, Jenji Kohan, Letters, Men's Prisons, Minor Offenses, More People Behind Bars Than Any Other Country, Netflix, Networks, No Just Say No, Nonviolent Offenders, Orange is the New Black, paper, Past Pop Up, Phones, Piper Kerman, preparation for re-entering the world, Prison, Prison Mail, Prison System, Reform, Rehabilitation, Ridiculously Long Sentences, Self-Reliance, Undesirables, Visit, Visitation, War on Drugs, Weeds, Women's Prisons, Zero Tolerance. Bookmark the permalink.