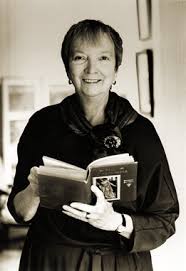 Madeline L’Engle is one of my favorite children’s authors. I first read A Wrinkle in Time in 6th grade maybe. It was published in 1962 and my mother remembered reading it. In any case, I got a copy of it for my 13th Birthday that I do know for sure That year I went on to read the other books in the series, A Wind in The Door, A Swiftly Tilting Planet, Many Waters and An Acceptable Time. 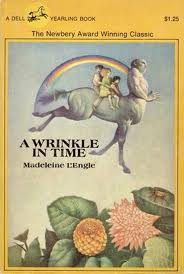 I enjoyed A Wrinkle in Time because it dealt with a geeky girl like myself and time travel. I identified with Meg and was intrigued by her little brother Charles Wallace. Now as an adult I also admire that it was one of the few really smart science fiction books out there at the time and that it also featured a female protagonist. Though it has strong Christian themes, it also holds science in high regards, which is something of an oddity even now.

Anyway, I did see the movie version which came out a few years ago and thought it rather cheesy. Given the technology of today, I am not sure why it turned out so awful. The unknown actors and lack of a sense of style hurt it too. Even still, I remain a fan of the book! And it thrilled me to see the writer’s of Lost were fans as well, seeing as how they gave it to Sawyer to read on the beach during an episode. 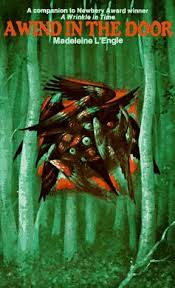 A Wind In The Door (1973) is an equally interesting book, if not more so. The title is taken from a line in Le Morte d’Arthur. For some reason the Debbie Gibson song “Silence Speaks A Thousand Words” reminded me of Charles Wallace in this book. So, Charles Wallace is being destroyed from the inside, on a cellular level, by the evil Echthroi (which is the Greek word for “enemy”) They are the un-naming. Now that I think about it, the Echthroi seem to have influence both Michael Ende’s idea of the Nothing in The Neverending Story and George Lucas’s idea of the the Force being inside Anakin at a cellular level in The Phantom Menace. The idea of possession and evil taking a scientific direction is thought-provoking indeed.

A Swiftly Tilting Planet (1978) was even better I thought. The book’s title is an allusion to the poem “Morning Song of Senlin” by Conrad Aiken. The books deals with Runes, Ancient Welsh travelers and Native Americans. What is not to like? I like that L’Engle views Nuclear Disaster as a modern evil born of science and that she tied it to something mystical as well. The Rune repeated in the book is of particular interest and influence a poem of two of mine early on.

Many Waters (1986) has always held a special place in my heart for some reason. The title is taken from the Song of Solomon 8:7: “Many waters cannot quench love, neither can the floods drown it. If a man were to give all his wealth for love, it would be utterly scorned.” It deals with the twins Sandy and Dennys. For once they are the ones who accidentally stumble through time and into a biblical adventure. They meet the mythical creatures known as Seraphim and the Nephilim and help Noah’s family. The twins must mature, and yet at the same time, come to embrace faith as well science. 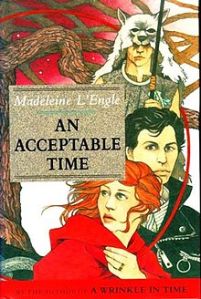 An Acceptable Time (1989) was perhaps my favorite in the series. The title is taken from Psalm 69:13, “But as for me, my prayer is to You, O Lord, at an acceptable time.” It follows Meg and Calvin’s daughter Polly O’Keeffe. Polly, who is visiting her grandparents, meets druids Karralys and Anaral and a warrior named Tav, all of whom lived in the area some three thousand years ago. She soon learns that she is not the first person from her time to meet the Murrys’ Pre-Colombian neighbors 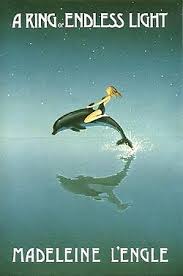 The Murry-O’Keefe books have further connections with other L’Engle titles. The Austin family books have three major crossover characters in common with the O’Keefe books, two of whom are introduced in The Arm of the Starfish. Canon Tallis meets the Austins in The Young Unicorns, which takes place a few months after Starfish. Adam Eddington meets Vicky Austin the following summer in A Ring of Endless Light, and Meg and Charles Wallace are mentioned in The Moon by Night. The Austin family series is associated with Chronos instead of Kairos. 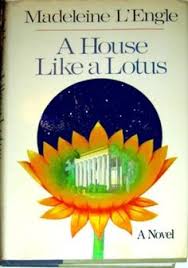 While I enjoyed all her other titles, The Time Quartet or Quintet is the only series of hers that I actually own. I suppose I just never connected with the other characters in the other books as strongly as I did with the Murry family. In any case, I highly recommend reading at least one thing that Madeline L’Engle wrote. It is a must.

Reading and writing and writing about reading are my passion. I've been keeping a journal since I was 14. I also write fiction and poetry. I published my first collection of short stories, "Radiant Darkness" in 2000. I followed that up with my first collection of poetry in 2001 called "Journey without a Map." In 2008, I published "Persephone's Echo" another collection of poetry. Since then I've also published Emotional Espionage, The Way The Story Ended, My Perfect Drug and Out There. I have my BA in English from The Ohio State University at Mansfield and my MA in English Lit from The University of North Carolina at Greensboro. I also have my Post BA Certificate in Women's Studies. I am the mother of two beautiful children. :-)
View all posts by carilynn27 →
This entry was posted in Biology, Literature/Pop Culture, Lost, Movies/TV, Religion, Science/Philosophy and tagged A House Like A Lotus, A Ring of Endless Light, A Swiftly Tilting Planet, A Wind in The Door, A Winkle In Time, An Acceptable Time, Austins, Biblical, Biology, Calvin O'Keef, Cellular, Charles Wallace Murry, Christianity, Chronos, Conrad Aiken, Debbie Gibson, Disney Movie Awful, Druids, Echthroi, Enemy, Evil, Female Protagonist, Geeky Girl, Good, Greece, It, Kairos, Le Morte d'Arthur, Mad, Madeline L'Engle, Madoc, Many Waters, Meg Murry, Michael Ende, Moon By Night, Morning Song of Senlin, Mrs Whatsit, Mrs Whosit, Native Americans, Nephilim, Noah, Nuclear Power, Phantom Menance, Polly O'Keef, Possession, Psalm 69:13, Runes, Sandy and Dennys Murry, Science, Seraphim, Silence Speaks A Thousand Words, Star Wars, Tesseract, The Arm of the Starfish, The Flood, The Force, The Neverending Story, The Nothing, The Time Quartet, The Time Quintet, The Young Unicorns, Time Travel, Unicorn, Welsh. Bookmark the permalink.