Lost, Faith and The Search For Truth

Courage comes in many forms….The season finale of Lost was very interesting. One of the many threads was that Locke decided to let the time run out and NOT push the button. He was afraid that there was no actual reason to push it—that absolutely nothing would happen if they stopped. Desmond and Jack, among others doubted the validly of the task. Still, no one had decided to risk finding out the truth. The possibility of dire consequences was enough to detour them from going through with it. 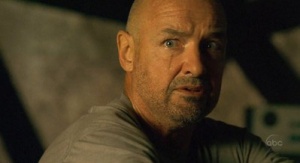 Finally Locke gets fed up. He is frustrated and even angry. It was time to know for sure. It was time to answer the question and move on. So he locked Eko out and prepared to face whatever happened next. When time ran out something DID happen. The electromagnet charged up and could have blown everyone to bits. Desmond saves everyone by using his failsafe key. Right before the pulse Locke tells Eko, “I was wrong.” The button did have a purpose after all. Watching this sequence made me realize just how much courage it took for Locke to do what he did. He risked everything for the truth. He confronted his fears head on.

What would I have done? I’m not sure, but I would guess my actions wouldn’t have differed much from Locke’s. I’d take things on faith and then fear would set in and I would eventually force myself to face the truth one way or the other. I’ve done that before, not with a computer button, but with feelings.

Reading and writing and writing about reading are my passion. I've been keeping a journal since I was 14. I also write fiction and poetry. I published my first collection of short stories, "Radiant Darkness" in 2000. I followed that up with my first collection of poetry in 2001 called "Journey without a Map." In 2008, I published "Persephone's Echo" another collection of poetry. Since then I've also published Emotional Espionage, The Way The Story Ended, My Perfect Drug and Out There. I have my BA in English from The Ohio State University at Mansfield and my MA in English Lit from The University of North Carolina at Greensboro. I also have my Post BA Certificate in Women's Studies. I am the mother of two beautiful children. :-)
View all posts by carilynn27 →
This entry was posted in Lost, Movies/TV, Psychology and tagged 2006, Blow Up, Button, Consequences, Courage, Desmond, Dharma Initiative, Eko, electromagnetic, Face Fears Head On, Faith, Hatch, I was Wrong, Implode, Jack, Locke, Loss of Faith, Lost, Many Forms, NOT Push the Button, Risk Everything, Season 2 Finale, Swan Station, The Incident, Truth. Bookmark the permalink.