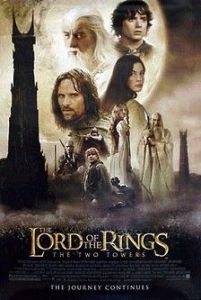 Sometimes a moment will be crystallized in time. Occasionally when I read a book, the memory of where and when I first read it will stick with me. Such is the case for The Two Towers. I had become enchanted with Willow back in 1988. That year my Aunt Barb got me The Lord of the Rings boxed set for Christmas.

That winter I read The Hobbit and The Fellowship of the Ring. But I remember specifically sitting in the Cosmetology Room at Pioneer while reading The Two Towers sometime in 1989. My mother had taken us there to get free or cheap perms. My hair was in bad shape between my last perm, sun-in and swimming the summer before. They couldn’t give me a new perm without risking damaging my hair further.

The imagery of the Two Towers made an impression because it played a major part in the story I began writing. I set about writing a piece of fan fiction—a sequel to Willow. At first I named it Aftermath,but then changed it to Sequences. Since I was only 12 at the time, the plot was muddled, but it did involve Willow traveling to a Tower in the woods. I even drew a picture of the Tower to go with the story. Though it looking more like Rapunzel’s Tower than Isengard or Minas Morgul.

Some 13 years passed and I hadn’t given The Two Towers much thought. Then then movie came out in 2002 and I found myself drawn to it one more. This time it was the imagery of the great hall of Rohan that captured my imagination. It felt familiar somehow and I theorized that perhaps I had a past life in Finland. Tolkien was inspired by the Norse, Swedish and Finish people after all.

Reading and writing and writing about reading are my passion. I've been keeping a journal since I was 14. I also write fiction and poetry. I published my first collection of short stories, "Radiant Darkness" in 2000. I followed that up with my first collection of poetry in 2001 called "Journey without a Map." In 2008, I published "Persephone's Echo" another collection of poetry. Since then I've also published Emotional Espionage, The Way The Story Ended, My Perfect Drug and Out There. I have my BA in English from The Ohio State University at Mansfield and my MA in English Lit from The University of North Carolina at Greensboro. I also have my Post BA Certificate in Women's Studies. I am the mother of two beautiful children. :-)
View all posts by carilynn27 →
This entry was posted in Literature/Pop Culture, Movies/TV, Writing and tagged 13 Years, 1988, 1989, 2002, Aftermath, Aunt Barb, Barad-dûr, Book, Captured Imagination, Cari Gilkison, Fan Fiction, Felt Familar, Finland, Finnish, George Lucas, Isendgard, J.R.R. Tolkien, Minas Ithil in the Morgul Vale, Minas Morgul, Movie, Nockmaar, Norse, Past Life, Pioneer Joint Vocational School, Rohan, Sequences, Swedish, The Lord of the Rings, The Two Towers, Willow. Bookmark the permalink.