Arts and Sciences is a good theme for the week. Generally, the term applies to a College of Arts and Sciences. It is a department or unit within a University and focuses on liberal arts and social sciences. A Liberal Arts College is an actual stand alone college or institution. Anyway, this week included a trip to the Art Museum, which falls under the heading of Art. We also visited a Monument dedicated to the scientist and inventor George Washington Caver, which falls under the heading of Science. The Discovery Zone also focuses on Science 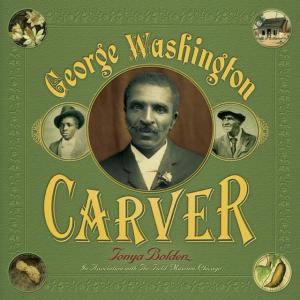 Sunday Ana and Sebastian were both bored, so we took off to see the George Washington Carver Monument in Diamond, Missouri. It is a 36 minute drive from here. We drove 37 North to Wentworth and then on Highway J. 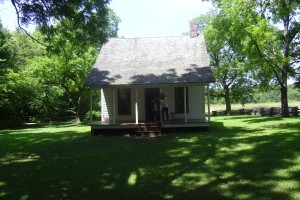 So we arrived at the Monument in the middle of nowhere and went inside the museum. We learned that George Washington Carver was born in 1860. He was born into slaver in Diamond, Missouri. His master Moses Carver encouraged him in his intellectual pursuit. After bouncing from black school to black school, he earned his diploma and went to college. Carver taught at the Tuskegee Institute and was head of the Agricultural Department. Over the years, Carver developed techniques to improve the soil. He also came up with alternative uses for common plants—like the peanut plant. Ray, who had been to the monument some 10 years ago, was impressed with Carvers intelligence and ingenuity. Though Ray didn’t come with us, he was the one who suggested we go. We watched a brief movie on Carver’s life and hiked out to the cabin. Hot and hungry, we left, but it was a good day.

Tuesday, I got the kids in the car and we drove up 60 to Springfield. We got to the Springfield Art Museum. It was in a nice neighborhood and park area. It pored rain before we got there, but cleared up some by the time we reached or destination. The Art Museum was nice, but not as hands on as the Denver Art Museum. The kids did find a small place to play before we left, but they quickly got bored with the blocks and things.

Not ready to go home yet, I suggested we head to The Discovery Center on St. Louis Street. It is a very hands on Children’s Museum with a focus on learning Science. They were happy to go. I paid the $28 for the three of us to get in and let them explore. There was a bed of nails, a water table and space exhibit. There was also a room dedicated to the human body and a room called ChromoZone. They had fun in the theater, grocery store, bank and newspaper office as well. We stayed nearly 3 hours. We left just 10 minutes before they closed and headed back home.

Reading and writing and writing about reading are my passion. I've been keeping a journal since I was 14. I also write fiction and poetry. I published my first collection of short stories, "Radiant Darkness" in 2000. I followed that up with my first collection of poetry in 2001 called "Journey without a Map." In 2008, I published "Persephone's Echo" another collection of poetry. Since then I've also published Emotional Espionage, The Way The Story Ended, My Perfect Drug and Out There. I have my BA in English from The Ohio State University at Mansfield and my MA in English Lit from The University of North Carolina at Greensboro. I also have my Post BA Certificate in Women's Studies. I am the mother of two beautiful children. :-)
View all posts by carilynn27 →
This entry was posted in Culture, Environment, Event, History, Science/Philosophy and tagged Agriculture, Art, Arts and Sciences, Bed of Nails, Black Man, ChromoZone, College, Cotton, Diamond, Diploma, Explore, Famers, George Washington Carver, Grocery Store, hands on, High School, human body, Ingenuity, Intelligence, Inventor, Missouri, Newspaper, Peanut, Science, Scientist, Slave, Soil, space, Springfield, Springfield Art Museum, Teach, Tesla Lamp, The Discovery Center, Theater, Tuskegee, Water Table. Bookmark the permalink.